A spinoff of the obscure arcade game Mr. Goemon, Ganbare Goemon! Karakuri Douchuu is an overhead platform game that served as the console debut of Konami's "Mystical Ninja" modeled after the Japanese folk hero. 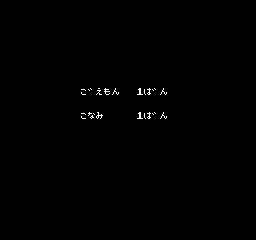 Hold A + B on Controller 1, then press Reset. After a while, the messages "ごえもん １ばん" ("GOEMON #1") and "こなみ １ばん" ("KONAMI #1") will appear. The first one stands for the PRG CRC test results, while the second stands for CHR CRC test results, and means that the tests passed.

Similar tests appear in other Konami NES games such as The Goonies II, Gradius, and King Kong 2.

At the beginning of the PRG ROM is the ID string: