The Legend of the Mystical Ninja

The Legend of the Mystical Ninja is a weird, comical action/adventure game featuring both overhead and sidescrolling segments. While the series lasted a fair while, this is one of the few entries to be released outside Japan. 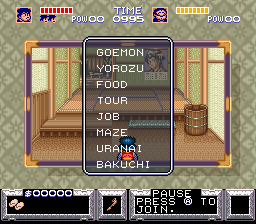 While the warp works, leaving the location warped to gets you stuck on another map. It seems some initialization code is missing?

Three unused items loaded into memory inside shops. Scrolls and weapon-upgrading "Lucky Cats" are only dropped by enemies or found in pots, but apparently at some point you were supposed to be able to buy them. The full single scroll graphic only appears in the Japanese version; the American version oddly moved it (leaving only a blank space where it once was), then deleted the top half.

A bag with a question mark on it, located with the other inventory items. No idea what this could've been intended for, but it was modified in the American version for some reason.

The doors in the maze mini-game have an unused opening animation. There it is!

Despite the myriad of untouched Japanese food seen in restaurants, Konami saw it fit to "Americanize" only the two that could be stored in your inventory. The typical Japanese rice ball became a slice of pizza in the west.

Another type of rice ball was changed to a whole pizza.

The little field sprite used if the food is stolen by the weird robots in area 6 was also modified accordingly.

The 1ups found in the Secret Maze minigame had its Japanese characters changed to a question mark.

The inventory icon was modified likewise.

The Japanese version of Ganbare Goemon (Legend of the Mystical Ninja) contained extra "Theatre" attractions in Warlock Zones III (Amusement Park) and VI (Tengu Mountain) which were removed from the U.S. and European versions of Legend of the Mystical Ninja. Interestingly, the first theatre scene was actually pictured in the instruction manual as "Sammy Rye's Circus Side Show". The sideshow was also referenced in volume 33 of Nintendo Power as "Sideshow". Also, it was referenced in Prima's Secrets of the Games: Super NES Games Secrets, volume 2 (ISBN 1-55958-193-X). This suggests that a decision was made to remove the Zone III Circus Side Show between the time the game was submitted to Nintendo and game publications for review, and the final release of the game. It is unknown if the removal of the scene was a result of a decision by Konami of America, or Nintendo of America's censorship policy of the early 1990s. It is possible, however, to access the U.S. side show using the Pro Action Replay (PAR) code for the location menu mentioned above. 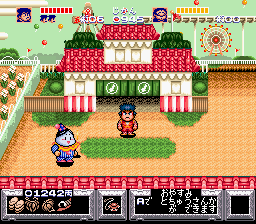 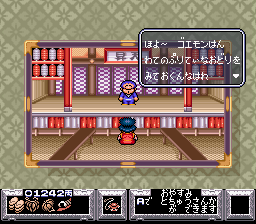 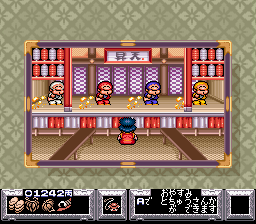 The scene in Zone III could be taken as crude humor, with Ebisumaru (Dr. Yang) dropping pants and passing gas at the end. The dropping of Dr. Yang's pants is most likely the primary reason for the removal of the scene, as Dr. Yang passes gas in the bath house in the U.S. version. This seems to suggest that "Fart Humor" is okay.

The second removed theatre scene was removed from Warlock Zone VI - Tengu Mountains. The theatre second act is named "Sexy Strip Show!" and depicts a Japanese Geisha girl performing a strip tease. Even though no explicit nudity was depicted, it was still removed from the U.S. version for obvious reasons. It is unknown if the resources for the strip show scene are still present on the U.S. or European version of the ROM. It appears that this scene is not accessible from the location menu Pro Action Replay (PAR) code in the U.S. version. 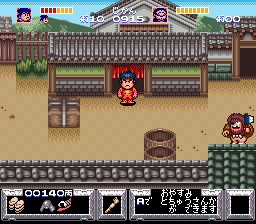 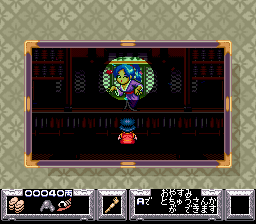 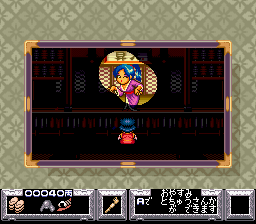 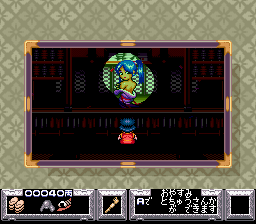 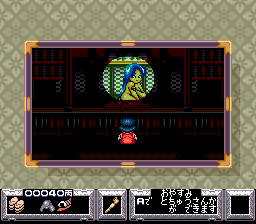 Goemon (Kid Ying) can be seen in the foreground, pumping his right arm in the air and cheering, during the strip tease.

In the Japanese version, there is only one maze to play in the maze mini-game. The US version has two mazes to play, with the second one becoming playable later in the game. 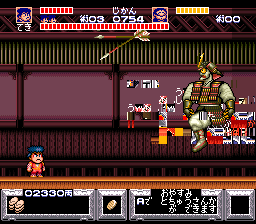 The sprites of the karajishi that the final boss General Hannya rides during the first phase are glitched in the Japanese 1.0 version. This makes it seem like the final boss is floating in midair a majority of the time, but glitched sprites of its legs will flicker on-screen when arrows are reflected, and a bunch of random glitch tiles will appear if the boss is attacked directly in place of its meowing animation (as shown in the image to the left). However, this glitch is only visual, so it can still be defeated normally.

The sprites were fixed in the Japanese v1.2 and international versions so they appear correctly.