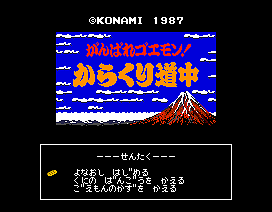 The MSX2 Goemon features a cheat menu that works just like the one in Vampire Killer and can be accessed the same way. Simply load the game with the Game Master cartridge in the second slot and after choosing a 1-Player or 2-Player game, you'll be taken to an additional menu that will allow you to change the land you'll start at (second option) and the number of lives (third option) before starting the game (first option). Strangely enough, the menu can also be activated by putting a Q-Bert cartridge in the second slot.