Ebisumaru has been kidnapped! Travel from town to town and beat up anyone who looks like they're responsible!

In the Game Over screen, during the "Continue" prompt, enter the Konami code (Up, Up, Down, Down, Left, Right, Left, Right, B, A). You can then access the hidden Sound Mode.

Use the Left and Right buttons to navigate the Sound Mode. To select the tune, press A. To stop the music, either press B or go to "00". The sound test itself only uses numbers for the tracks, and does not have any song titles. To exit the Sound Mode, press Select.

A simple, unfinished Debug Menu exists in the game's code. Use the Game Genie code 2FC-86F-7FE to access it. Note that this code will skip over initializing many variables, so you'll need to set them manually once inside the menu. All numbers in the menu are in hexadecimal, but since there is no full hex character set, you won't be able to see all of the numbers properly.

There are four options on the menu, with the third being invisible. The first two options correspond to the stage and stage location indices, respectively. The third option changes the value of the music index, but there is no code to actually play any audio. The fourth option is for some in-game flags, but it doesn't seem to actually work.

Change the values with the D-Pad, then press Start to start the game with the selected options.

The game was included as part of Konami GB Collection Vol.2 released for the Game Boy in Japan. The collection added a Super Game Boy support for all of the games. 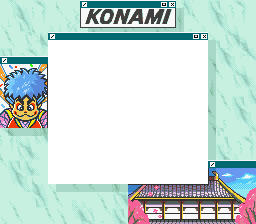 The European version was only available as part of Konami GB Collection Vol.3, released for the Game Boy Color.

The European version adds the name of the current region on the bottom of the map screen that displays before the start of every stage.

However, the region name that displays tategaki-style in the top left corner at the start of each stage is removed from the European version