Proto:The Legend of the Mystical Ninja

This page details one or more prototype versions of The Legend of the Mystical Ninja.

A prototype of Ganbare Goemon: Yukihime Kyuushutsu Emaki was present among the July 2020 Nintendo leaks. It can be found in NEWS\テープリストア\NEWS_05\NEWS_05.tar\home\kimura\games.lzh\games\goemon. Extract game.exe, then change the extension to .sfc or .bin.

The prototype has a last modified date of May 31, 1991, six weeks before the game's release. However, the amount of progress shown in this build suggests that it either dates from a significantly earlier point in time, or the developers were put under a massive amount of crunch to get the game finished on time. Only the first four stages are finished, with the other five ranging from almost finished to barely started.

Both the sky and Goemon's house are brighter in the final game.

The large font in the prototype uses a basic thin typeface, while the final version opts for a more calligraphic style.

The intro has an off-model Goemon sprite. Check out the massive shoulders on this guy! He also has a larger face and a different haircut, with more of his forehead visible. The starburst-like shading style in his hair was changed to something more natural, as were his original blob-like ears. All of these changes drastically cut down on the number of tiles stored in VRAM.

Funnily enough, while his eyes had to be readjusted, his mouth graphics are almost identical in both look and placement.

Ebisumaru went through relatively minor changes, with his shoulders narrowing and his eyebrows growing slightly bushier.

The flashing text is green and tan in the prototype, while the final game changes this to a better contrast of orange and white. 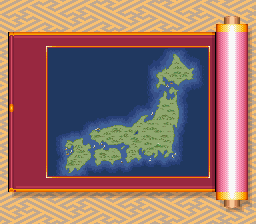 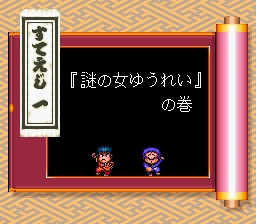 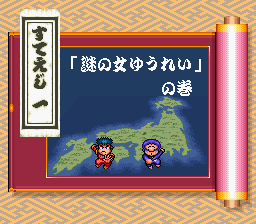 The final game adds some visual spice (and justifies the map being a Mode 7 background) by adding a zooming and tilting animation. The map then stays on-screen as Goemon and Ebisumaru appear. 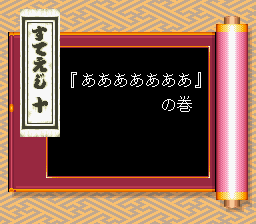 Goemon has a slightly darker palette in the prototype, which is especially noticeable with the shades of red. Goemon's default expression changed from looking like a frowning cat to a frowning man, and his arms were put at rest. In the prototype, his face is a bit fatter in his W/E idle animation, and a few bits of hair here and there were deleted from his south-facing idle frame.

In every single frame of Goemon's piggybacking animations, Goemon's ears are drawn smaller and with less detail, and he's missing the part in the middle of his hair; both of these were fixed in the final version. A few tiles were later taken out of his swinging sprites to save space, but since Goemon is always overlapping with Ebisumaru's sprite in these animations, it's not actually noticeable in-game.

A little hard to see, but in Goemon's flying sprites, they remembered to add the part in the middle of his hair.

Fixed the part in the hair, made the ears consistent with the rest of the sprites. The usual.

Two of Ebisumaru's idle frames are drawn off-model (i.e., not fat enough). Even his hands got rounder!

The back of Ebisumaru's head is drawn differently, with a smaller mask and what seems to be black hair underneath. In the final game, the mask covers the entirety of his head. Note that later games in the series use the prototype's design.

The first two sprites saw the sash on Ebisumaru's gi reduced in size, while the third sprite had a bit more pudge added to it.

This frame from Ebisumaru's Sakura Dance jutsu isn't used in the prototype and was deleted from the final game.

There are three hurt frames for both Goemon and Ebisumaru that were deleted from the final game. The second frame, meant to be used while crawling, isn't used even in the prototype... 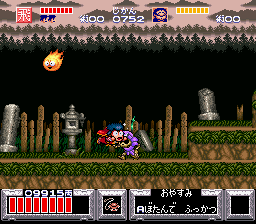 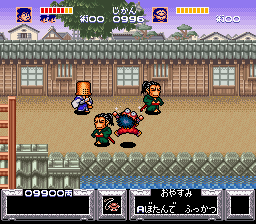 ...but the other two are! In the final game, getting hit while flying simply cancels the jutsu, and getting hit while facing north displays the standard W/E hurt animation. It's likely that all three sprites were cut just to save space.

While jutsu are not normally available in the prototype, they are fully coded. Use the following Pro Action Replay (PAR) codes to give Goemon and/or Ebisumaru all four jutsu and infinite power: 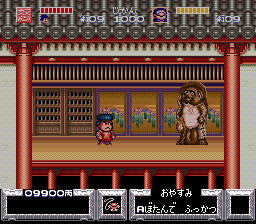 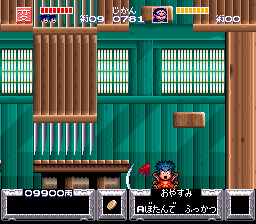 The prototype is missing 20 tracks from the final game. In their place are either reused tracks or nothing at all:

The following tracks are missing stereo effects (all channels are centered) but are otherwise complete:

The prototype has 82 sound effects, while the final game has 119 sounds. 11 sounds present in this build were changed between here and the final, mostly adjustments in pitch:

The prototype has one exclusive sound: 62, a longer, deeper version of the bell gong used in Horohoro Temple.