Mystical Ninja Starring Goemon was one of the few Goemon games to get localized. It wasn't a sidescroller like most previous Goemon games, but an average 3D platformer. At least it didn't replicate the PlayStation Goemon disaster. 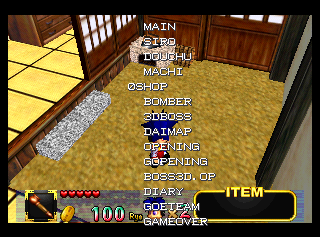 A debug mode can be enabled using the following GameShark code:

Once activated, simply press L at any time to bring up the menu. This menu can warp you to any room/scene in the game and is nicely categorized by type. Left and Right on the D-Pad will let you jump through room numbers in increments of 1, 10, or 100. "STAGENAI.NO" represents the per-category room number, and "STAGE.NO" represents overall room number. There are some broken/unused rooms lingering about.

Present in Impact's special move function is this blue bullet attack. There is no longer any combination to normally use it. Apply the below code then press the GS button while in an Impact boss battle mode to replace your regular bullets with this.

This will do 10 damage per hit that hits the boss. It will also allow you to hit the boss in any state. 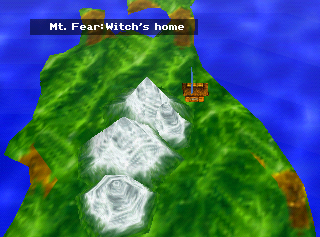 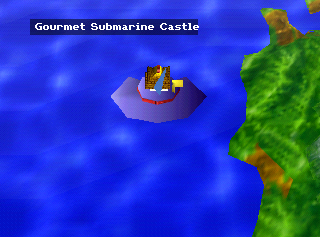 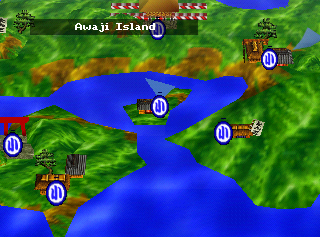 Present in the game remains several early hit animations. It appears at one point in development you could get pushed back by certain attacks and have a unique animation for said attacks. You would have been able to fall down based on where you were hit (from the front or back). These are fairly lengthy animations which is probably why they were cut. There are also duplicates of Yae's mermaid animations (dash, swim and death) unused for event scenes. Also unused are more duplicates of the burnt animation and death animations for event scenes which is a bit odd.

Replace ?? with an unused value listed below.

These can be selected by using the debug menu. Many of these rooms are alternates of used versions. 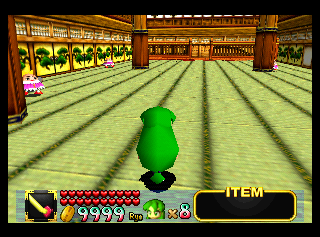 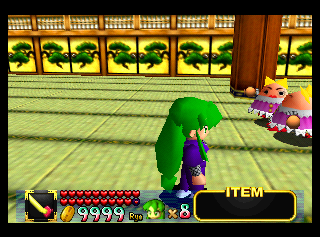 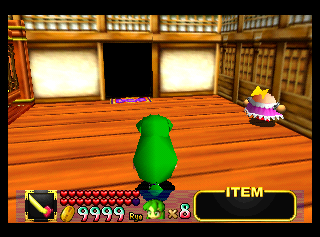 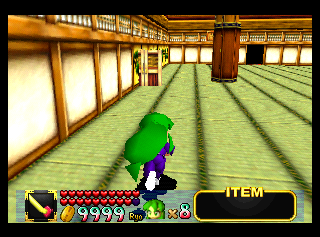 An alternate version of the tile room. This contains no floor enemy tiles and four pink robot girls. You can exit through one door that is oddly placed which will take you outside of the first gold locked door in the castle. 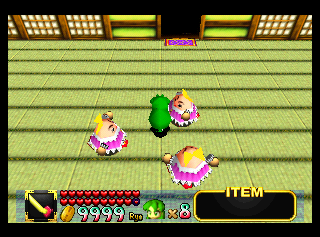 An alternate version of the gold key room. You start out in mid-air and drop down from the center. Contains only three pink robot girls, no door, and no key to obtain. 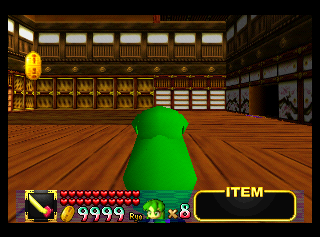 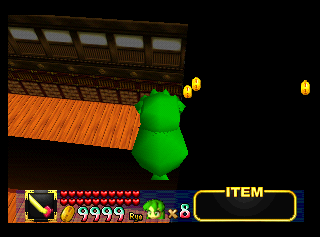 An alternate version of the Congo boss battle room. This room normally crashes due to invalid actor group data. The Ryo coins in the screenshots above represent the actor placements in the map. The actor data that was originally present in this room was a dango, drum robot enemies (first appearance in Oedo Castle), and a silver key that would have been visible. The silver key appeared to have special flags attached to its actor that do nothing special. 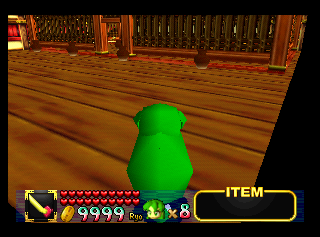 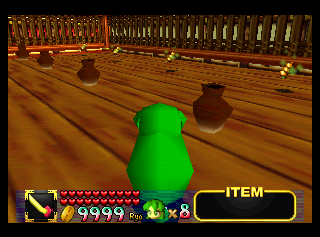 An alternate version of the final room. Contains lots of pots and gold dangos. 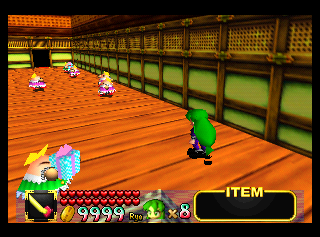 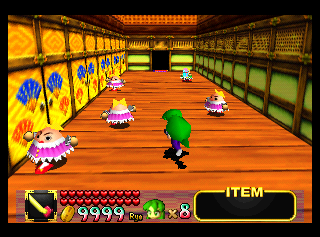 An alternate version of the first elevator room. Contains more enemies and has no loading zones.

An alternate version of the Bazooka room. Contains no items but does contain a actor in the middle of the room but isn't clear what it is since it's not visible.

An empty map that has no textures. It does have collision and the only actor in the map is the glowing IN arrow sign. The second layer of the song plays here. 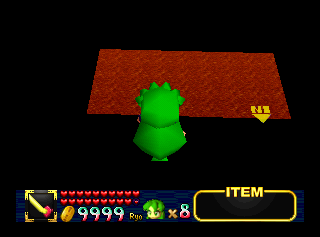 This map on console natively is a black void with an IN arrow sign actor and red water. When rendered on an emulator, it actually has a bit of a background with proper collision.

This map normally crashes due to invalid actor groups. When loaded, you're placed in the center of the map and fall down in the middle block near the waterfall. This map has no enemies, loading zones, is missing the waterfall itself, and the mini game.

Spawns you in the center of the room. You can donate but nothing happens. Contains no exits.

Note: This map likely only loads on hardware. 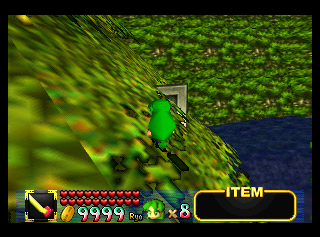 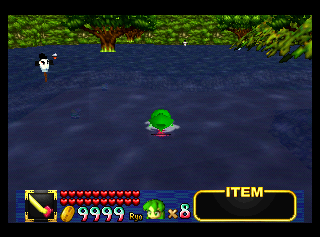 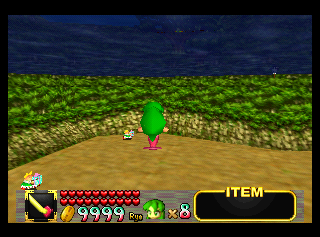 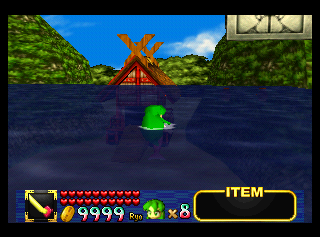 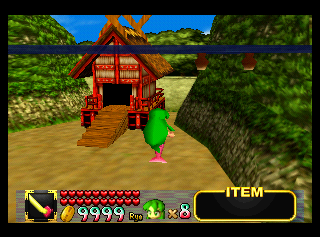 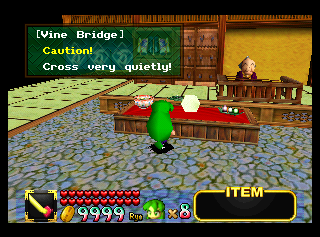 This is likely from a 6th town map no longer in the game. Contains no fixed camera angles, or exits. Plays Oedo Town music.

An empty inn. This is likely from a 6th town map no longer in the game. Contains no fixed camera angles, or exits. Plays Oedo Town music.

Fully functional Plasma Man. This is likely from a 6th town map no longer in the game. When exiting, you'll be placed in the Oedo Castle stairs section.

No fixed camera angles and spawns you in the center of the map. Can't exit. Plays Awaji Island tourist music. 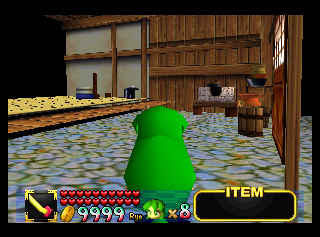 Several early voiced character lines remain in the game. These are mostly alternate hit and attack grunts. There is also a decent amount of early Sasuke voiced lines here as well.

By pressing All C buttons and A and B in specific rooms a hidden NPC will appear!

Currently known rooms that this works in:

Here are some images! 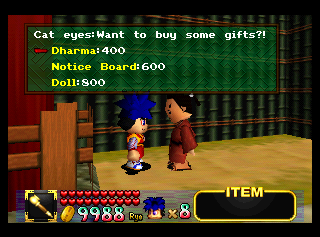 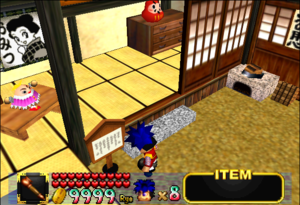 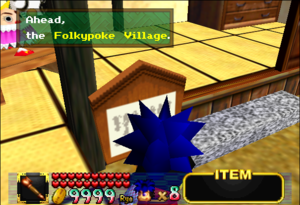 More coming soon, because right now there is not much known about this! In the meantime, here is what a couple say:

If the player purchases the items, Ryu will be decreased by the stated price, but nothing will appear in the inventory. If the player is to head back to Goemon's house, the room the player starts in at the very beginning of the game, they will see three newly added items. A Dharma doll on the dressor, a doll of the pink enemy (the first one you encounter in the entire game) and a sign that says "Ahead, the Folkypoke Village". 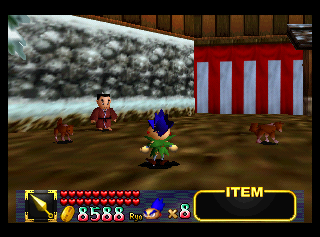 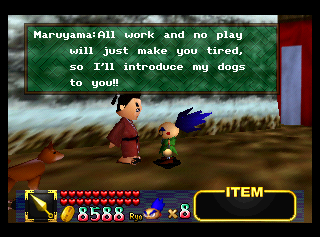 A man and two dogs appear.

An "Osumu Maruyama" did work on enemy coding, but apart from a "Terue", the other two are absent, leaving this event's status as a developer Easter egg up for debate. 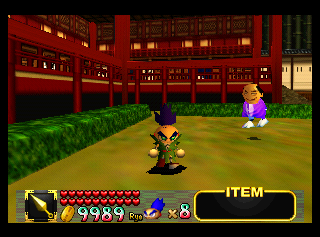 Entering the code here simply spawns a pickpocket that behaves as normal (steals 50 ryu if touched; can be swatted away).

The North American and European title logos are very different from each other, though use the same font. Europe's design is closer to the original Japanese, as seen below. Interestingly, in Europe the same logo was reused for Mystical Ninja Starring Goemon (Game Boy), but in North America the Game Boy version's logo resembles the SNES game The Legend of the Mystical Ninja. Also, in the Japanese version, the polygonal background elements during the intro and title screen are in hi-resolution.