Ganbare Goemon: Uchuu Kaizoku Akogingu is the first Goemon entry on the PlayStation, and one of many Goemon games that never got a release outside of Japan. It's a spiritual successor of sorts to Goemon 3 on SNES and ranks high up there in the series.

The following disastrous 3D-platformer, and the sub-par New Age entries, on the other hand... Let's just say it wasn't much of a surprise that Konami only localized the Nintendo 64 entries. 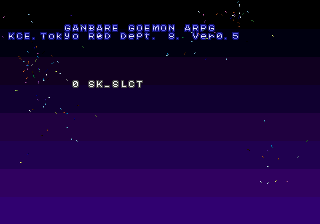 A level select can be accessed by using the GameShark code 80075174 005F and then going anywhere in the game that switches to another screen, which will bring you to it after playing a Goemon Impact CGI. This screen also shows that the game had an internal development name of Ganbare Goemon ARPG, along with a build number Ver0.5. 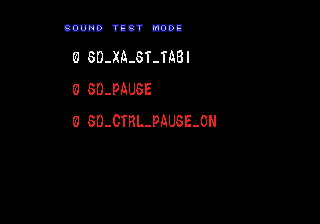 A sound test can be accessed by going to number 25 in the level select, or by using the GameShark code 80075174 0025. The top option is for the game's soundtrack, middle for sound effects, and bottom seems to be for various options for the game like sound volume, turning off the pause function etc., or choosing reverb levels, though some options don't have any visible effect. 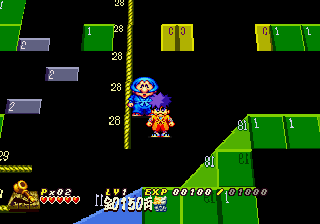 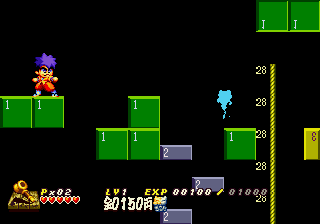 Two test levels can be accessed in the level select by going to numbers 2 and 3. The first one has a flame (which is actually the flame that comes out of Goemon's pipe as you level up) at the beginning which possibly was used for testing hitting collision, and seems to shoot out a Ryo coin in intervals. The rest of the area repeats a couple of times before reaching the bottom, with ropes and ladders and platforms for engine testing.

The second test level is a test of the overhead map engine, and uses the same layout as the first test level. 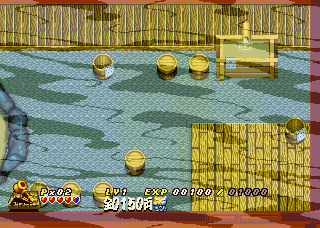 In one point of the game, you can find an onsen (accessible in the level select by going to number 24) where after leaving Ebisumaru finds he's put on someone else's clothes. This onsen scene has more graphics to the right of the screen that the camera never shows and don't appear anywhere else. You can see this area by using the GameShark code 80075174 0024 when within any level and the camera will start off moving from the right to the left of the area.

Several tracks are still on the CD but never used in-game.

Going by the title, they probably originally planned to have this music play whenever you collect an important item.

Possibly another alternate ending theme. Probably meant to loop somewhere after its beginning, going by how it cuts off.