The fab four must cut their vacation in Florida short in order to save Manhattan, which has been turned into a floating island by Shredder, who has also kidnapped April (again) along the way. The third TMNT game on the NES follows the same beat-'em-up format as the second one, but instead of being a port of an arcade game like its predecessor (or the later-released Turtles IV on the Super NES), it's an all-new game made from the ground-up.

At the very end of PRG ROM (address $FFF0) is the string MSTR911007, where MSTR refers to the "master" or final build status of the ROM, and 911007 is the build date (911008 in the JP version). Changing the letter "M" (use the Game Genie code AENYENIG) to any other value enables a few simple debugging features:

If the number "9" in the same string is altered (use the Game Genie code AENYKNPL), then some more debugging features are enabled. To activate it, press Start to pause the game, then press Up / Down to cycle between debug modes. The letter at the bottom left corner will display the current debug mode: 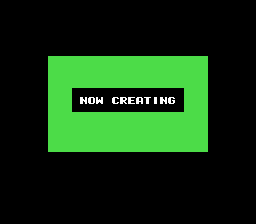 The game's packed tilemaps contain at least one unused screen with placeholder graphics from an early development stage. This picture would be displayed instead of unfinished cutscenes.

Shredder shown during the cutscene before Stage 1, has his face fully rendered but overlaid by his mask, represented as a sprite to make him look like he's talking. This also occurs in the shot, where Shredder's holding April hostage. To view it in the game, set the RAM address 0420 to 00.

Due to the titling differences in the first and second NES games, Turtles III was renumbered for its Japanese release, becoming Turtles 2 in the process. The subtitle is the same for both versions, but the Japanese version spells it in katakana. Despite the later copyright date, the American version is actually based on a slightly earlier build (a day older) of the game than the Japanese version.

Unlike the other NES games in the series, including Tournament Fighters, Turtles III was not released in Europe.

The options screen in the US version is only accessible by entering a variant of the Konami Code: at the title screen, press Up, Up, Down, Down, Left, Right, Left, Right, A, B and Start. This screen will give the player the option to start the game at any stage, adjust the difficulty level, set the number of lives or listen to any of the game's music tracks.

In the Japanese version the options screen is accessible from the main menu without the need to input any code. The stage select feature is replaced with a "game type" setting, which simply sets whether friendly fire is turned off (type A) or on (type B). While the American version handles this by having two different 2-players mode, this still gives the player the option to turn off friendly-fire even in 1-player mode in case a second player joins-in during gameplay, a benefit which isn't granted in the American version.

The Japanese version has an added set of cheat codes that are all based on variations of the Konami Code. Simply input any of the following codes at the title screen and then press Start. 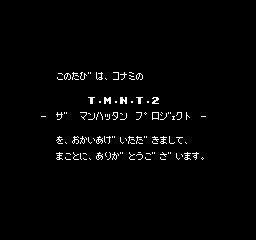 Displays a generic congratulatory message as a gotcha to players expecting something for entering the standard Konami Code. It says: "We are truly grateful for your purchase of T.M.N.T. 2: The Manhattan Project by Konami on this occassion." 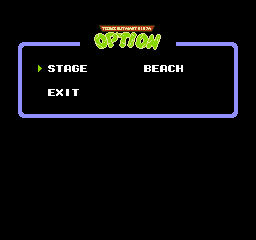 Takes you to an option screen where you can choose which stage to start at. Accessed by entering the Konami Code with the directions and buttons changed to their opposites. 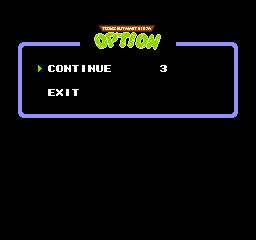 Takes you to another option screen where you can choose between having 3 or 5 continues. Accessed by entering the Konami Code in reverse order.

There are some glitches in each mode. The Japanese mode of the NES version doesn't have Japanese fonts, so all the messages become gibberish instead. The title screen remains the same as the US one, but a number "2" appears on the center of the screen, and the palette changes to the one used in the Famicom version. On the other hand, the English mode of the Famicom version doesn't have the number "2" on the logo, but has a very glitched palette on the Japanese logo. However, all English messages and cutscenes are readable and seem to be the same as in the released NES version.

As with most of the games Konami has published after 1990, this game features a copy-protection routine. The game checks to see if the "©" character and the "© Konami" text have been modified. If they have, the game silently reduces the damage the player deals out, doubles the damage they take, disables cheats and makes Shredder immortal.