The second TMNT game for the NES, which is actually a port of the popular arcade game that was released around the same time as the first NES game. This 8-bit console version adds a few exclusive stages and bosses in order to make up for the obvious visual downgrade and the fact it only supports up to two turtles players . 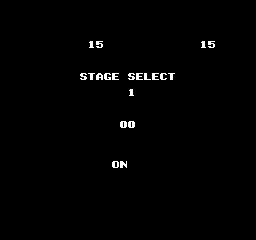 The Game Genie code AIOINPYO enables extra cheat options in the "STAGE SELECT" menu in the US version. Press Left / Right to select a stage. The player can also press Up / Down to change the starting position in a stage. Press B to increase the number of lives for both players (this can go up to 50), or press Select to switch ON or OFF invincibility/maximum power mode. 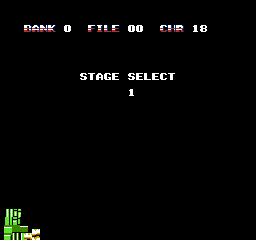 Enter "STAGE SELECT" mode, then enter the Game Genie codes XSUSZOES + TEUSPOVG in the US version to enable CHR test. It seems that only control routines are left from this mode. There are no object position initializing or initial screen draw routines. You can change CHR objects by pressing the A / B buttons, change "FILE" index by pressing Left / Right or select "BANK" number by pressing Up / Down. There are no proper CHR bank setups left either. 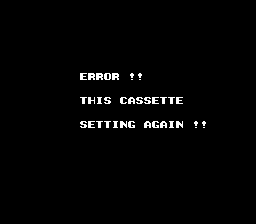 As with most of Konami's games after 1990, there's a copy protection mechanism. At the start of the game, the game calculates the CHR ROM checksum to ensure its consistency, and sets a flag if there's a consistency failure. If the flag is set, the scene number screen will change to this strange error message. Additionally, after beating scene 2, the game will immediately loop back to scene 1.

Considering that "set" and "cassette" are typical mistranslations of "insert" and "cartridge", this message may be attempting to say something along the lines of "Please insert the cartridge again."

The anti-piracy feature is limited to the Japanese version.

This rather large logo is found with the enemy graphics for the dojo level. Unlike every other Pizza Hut graphic in the game, this one wasn't erased in the Japanese version.

A smiling variant of the face used as cursor in the title and continue screens, most likely meant to be used when pressing start. The tiles are located next to the other face in the tiles bank, and the sprite's definition was coded in and fully functional; it was just never programmed to appear anywhere.

In the original arcade game, the Technodrome cutscene used before Scene 5 (aka Scene 7 in this game) and in the game's ending had a cliffside visible in the upper left corner. It seems like this detail was planned to appear in the NES version too, and there's even plenty of space for it on screen, but it's absent for whatever reason.

The roadblocks found at the end of the first section of the arcade game's Scene 3 (Scene 4 in this game), another arcade element curiously absent from the NES version, though they do show up in a screenshot in the game's manual. 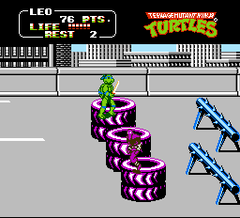 The roadblocks are actually in the level data, though unlike the arcade game and the screenshot from the manual, they are located behind the tires. The screen never scrolls far enough for the player to see them. This is what it looks like if you artificially make the scrolling go all the way to the end of the screen.

Hidden amongst the strings used for displaying the game over and continue screens, as well as the cheat and disabled debugging menus, there are two additional strings not used anywhere in the game. The first string is "PLAY SELECT", a string which had previously appeared above the 1/2 player selection menu on the title screens of several Konami games such as Contra. The second string is "a KONAMI 1989", which uses standard ASCII encoding, and was presumably used as a copyright string in earlier versions of the game. The "a" at the start of the string is supposed to represent the "©" symbol in the early CHR set. Now, this symbol is allocated to $53.

At 40000 in all versions of the ROM is an ID with a date that version of the game was compiled. A similar ID is found in many other Konami games.

"MAST" means it's the "master" version of the game, and the numbers are the date. So the US and European versions were finished on August 1, 1990 while the Japanese version was finished on September 12, 1990.

Oddly enough, the "prototype" of the game was compiled the day after the final build of the US / European versions. The only difference at all is that string. This build was most likely used for review copies or demo stations in stores.

In Europe, the franchise was known as Teenage Mutant Hero Turtles at the time and the logo was changed accordingly to reflect this difference, but for some reason "The Arcade Game" banner was recolored from red to purple as well.

The western versions were sponsored by Pizza Hut, and as such their logo appears a couple of times throughout the game. Neither the Japanese version nor the western version included in The Cowabunga Collection feature this sponsorship.

This is a picture hanging on the wall in the first stage. In the Japanese version, it shows a picture of a city, like in the original arcade game. The western version included in The Cowabunga Collection paints over the logo.

These are the falling posters the Foot Soldiers hide behind in the second stage. In the Japanese version, it shows an advertisement for "TURTLE RACING".

In the Japanese version, the signs in stages 4, 5 and 8 are not found.

One of Michelangelo's frames of animation is "glitched" in the US version. This is the second frame of animation in his special attack (pressing A + B). The tile that makes up his shoulder is a duplicate of the tile directly to the left of it.

It's not a programming error though. Someone just copied over the tile with the one next to it by accident and nobody noticed. Because this frame of animation goes by so quickly, it's hard to notice unless you pause the game at just the right moment.

This mistake doesn't exist in the Japanese or European version.

This is the frame used when any of the turtles get hit while standing still. The shadow was changed to look less round in the Japanese and European release.

These are the frames for Raphael during Stage 3 when his legs are in the water. A pixel is hanging below him while standing still and it also occurs one of the frames for walking, as it recycles the same tile. This pixel was removed in the Japanese version.

This is Bebop's charging animation. The bandanna around his leg is missing in the US and European versions, even though it's in all his other animations. This was fixed in the Japanese version.

Other parts of this animation were also slightly altered in the Japanese release. In the first frame, his front leg was made to be more angular. His foot and his shadow were also made slightly smaller. His shadow in the third frame is also slightly thinner.

As you can also see, this graphic was cleaned up a bit for the Japanese version. A new 8x16 tile for his arm was drawn and squeezed into some extra space between the graphics for his shooting animation. However, the top of his head is still cut off. His cheek area is also rather ill-fitting.

The third image is a mock-up of what the sprite probably should have looked like, using the tiles that don't end up being used in any version.
This new shoulder sprite was added in the Japanese version due to the devs inability to use the proper shoulder and ear sprites: each enemy uses two different sprite banks at the same time, the second bank being swapped depending on which frame needs to be displayed, because bosses have sprites in at least 4 different banks each. The issue is that while the body is in the boss' 3rd bank, the sprites for the proper shoulder and ear are in the 4th, and they can not use these two banks at the same time when displaying the defeated frame because they can only use two banks at the same time and they need to keep the 2nd bank, the one that holds the laser shot, in case they are still on-screen. This is why the Japanese version added the shoulder sprite in the 2nd bank, the bank with the laser shots, but since there was only space for one more 8*16 sprite in that bank, and the proper shoulder and ear seen in the mock-up needs two 8*16 sprites, they made a new version condensed in a single sprite.

This is part of the walking animation for the Katana Foot Soldier. His outer arm is slightly thinner in the Japanese version.

This is another part of the walking animation. For some reason, the hilt of the sword is missing in the US release, making the blade look like it's floating in the air.

The skateboarder lady from stage 2 looks slightly different. Her front leg is slightly thinner and angled inwards in the Japanese version.

Though you get an extra point for attacking her in the US and EU versions, the Japanese version doesn't award any points.

The vertical scrolling in Scene 2 looks more glitchy in the Japanese version with more flickering pixels showing on the screen.
Furthermore, the stages that require a specific kind of scrolling have the entire gameplay area shifted up one pixel in the US version, as you can see on the stage 4 Pizza Hut sign comparison screenshot above.

The European version has an additional section of staff credits not present in the Japanese or US versions.