Teenage Mutant Ninja Turtles is a DOS port of the NES game. Unfortunately, it has a massive design flaw in Level 3 that makes it unbeatable without cheating.

The game contains two debugging codes, one which grants invincibility and the other which allows you to walk or swim through walls. Q + R + P is the invincibility code, and A + S + G is the no-clipping code.

The no-clipping code in particular will also allow you access to a hidden area in Level 2 (the underwater portion of the dam area) where two of the artists' names are scrawled out in huge letters on the screen. 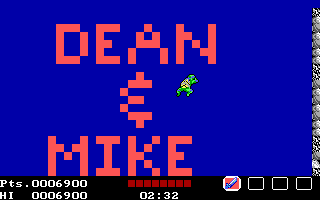 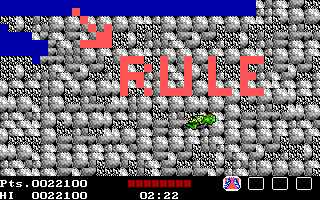 The European release of this port is titled Teenage Mutant Hero Turtles.

Interestingly, the impossible gap from the North American release was fixed for the European release.