Lufia & The Fortress of Doom (SNES)

Lufia & The Fortress of Doom, the first entry in the series, is a Dragon Quest clone with very little to make it stand out other than its large (perhaps too large) sprawling dungeons and huge array of usable items. It's perhaps better well-known outside of Japan because it actually got a localization.

Data exists for a warp point for a location called "Macao", which just places you in the mountains near Linze. In the Japanese version, however, it warps you out somewhere in the ocean (not sure if this is due to something in RAM or plot advancing or what yet).

There are several other unused warps: a blank one before Alekia, and two Elfrea spots, one of which also teleports you to the Macao location.

Interestingly, the Silver Tarot and Royal Statue are listed alongside the Ancient Cave items. You get these two items, which have no other use, in the basement of Herat castle alongside the final piece of Alumina. 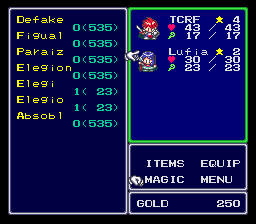 He and his church got the usual Nintendo of America runaround.

In Forfeit, you encounter two girls who won't let you leave the shop unless you buy something. Much like in the sequel, they were originally in bunny girl costumes.

In both versions, you can press X over spells and get a description of what they do. However, in the Japanese version you can also do this with all items and Scenario items. 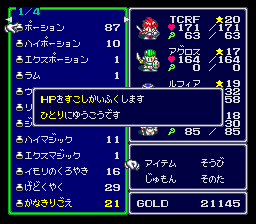 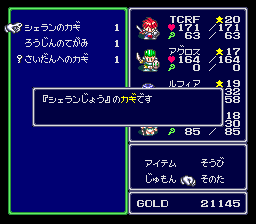 It appears the localization team cut a huge corner by removing these from the game. Potentially due to ROM space, as the localization seems to use nearly all of its allocated space. The final version of both the JP and EN versions are 8 megabits, but the localization was possibly originally announced to use 12 megabits (according to GamePro and EGM reviews of the game, though Nintendo Power listed it at 8 meg).