The graphically watered down version of Mafia, especially when compared to its original PC counterpart. 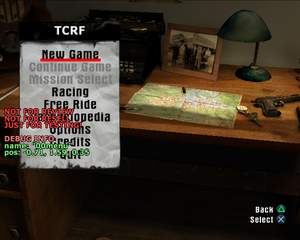 There is a debug display that displays the lines "NOT FOR REVIEW, NOT FOR RESELL, JUST FOR TESTING!" And then just under it - "DEBUG INFO" displaying the currently loaded environment name, as well as your current position.