Metal Storm is an NES game by Irem where you basically play as Captain Viridian's mecha ancestor.

The game uses bank switching to create the illusion of parallax scrolling.

Two small tiles that could scroll vertically or horizontally.

A large, seemingly incomplete tile. Judging by its positioning, it may have been an early version of the background used in the Stage 2 boss fight, being overwritten by the final version, which uses 16 frames instead of 32.

Two variations of the same background element: one scrolling downwards, the other upwards. 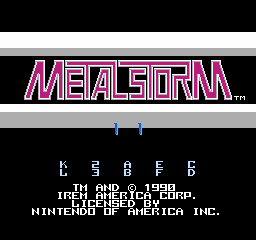 The Game Genie code YASNUKZA enables a level and powerup select. Press Up and Down to select a level, or Left and Right to select a powerup (the five sets of letters will change depending on what powerup you select). The powerups, from left to right, are None, Shield, Gravity Fireball, Armor, and Power Beam. Press Start to enter the selected level, or hold A and press Start to start with the Armor in addition to whatever powerup you selected. 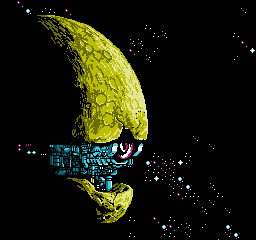 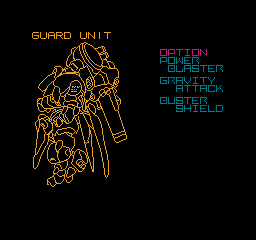 The Japanese version of Metal Storm contained a neat little intro sequence (including opening credits), which was disabled in the US version. However, the code was left mostly intact, and can be re-enabled using the Game Genie codes SNKEPULO and OOKEZLVP. The only things removed were a "TAMTEX" logo (the division of Irem that developed the game), a few screens of Japanese text, and the tiles for an exploding planet animation, which suggests that Irem originally planned to keep the intro. Why it was ultimately disabled is anyone's guess.

The Tamtex copyright was also removed from the US title screen, leaving only the Irem copyright.