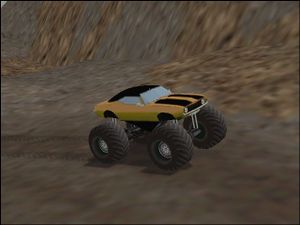 This game was supposed to contain a monster truck called "Chuck's Car," which was named after Chuck Carson, the 3D modeler of this game. According to him, it was a Chevrolet Camero. It was intended to be unlocked with a cheat code prompting the player to restart the game to drive this vehicle, but it was revealed in March 2009 that it was cut to prevent licensing issues with Chevrolet.