Moon is a very artistic and beautiful game from Love-de-Lic.

All of these tracks were obtained with the tool PSound. Since it'd take up too much space to put each separate file, any one voice has had all its files saved into one audio file.

Possibly from the same one above?

This voice comes before the files for the radio voice of the umbrellas at Hager's lab. Possibly an earlier version. It appears to be samples of the song "Tokyo Shoe Shine Boy" by Teruko Akatsuki.

This voice is next to other audio files from the firework area. This could be the wife getting mad at the husband. 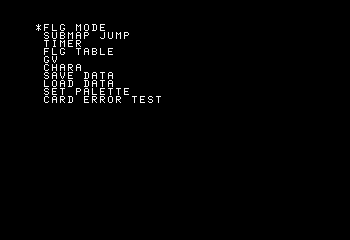 A functional debug menu is present, although no call references exist to its setup function, nor any logic to flush strings written by it, which is required for text to be printed to the screen. This missing logic can be patched-in with the following GameShark codes. Afterwards, on an in-game screen press Triangle, Select. 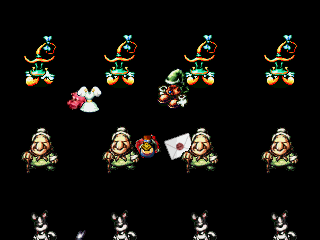 Use GameShark code 80111610 0065 before the Love-de-Lic logo vanishes at the beginning and you'll end up in a mini-debug room. Perhaps the most interesting thing is that there's an earlier version of the player's sprite at the top of the room. Talking to anyone in the room will give you the option of starting the game at different areas, although it barely covers the full game and is only some select areas.

There's also a Re-Man to the right of center of the screen who asks if you want to test XA sound. Choosing yes doesn't seem to give you the option to do anything, though.

Use the provided GameShark code before the Love-de-Lic logo at the beginning vanishes. 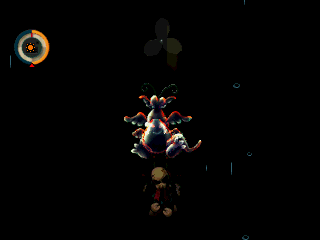 An unused cutscene for a scenario originally planned towards the ending. In this scene the dragon, which is normally only mentioned but never seen in any parts of the games besides FakeMoon, is shown to be evolving from the player, and many characters appear bruised or injured in some way. The rain also gets heavier as the scene continues.

This scene is very interesting in that it shows some characters never usually seen anywhere else, including a guy with a skull head and a red turtle who's done in the clay style of animals you'd usually catch the souls of. 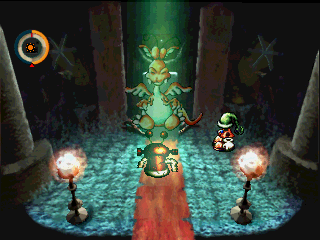 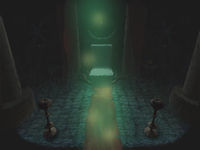 This picture from Love-de-Lic's old website shows the original illustration for this area. This picture does appear in-game, though it's been stumped to being a blurred background when you go to sleep.

The Dragon's Room (竜の間) was originally planned to be the climax point of the game. According to Love-de-Lic's old website, this room was eventually scrapped when it was decided they'd depict the Moon with clay graphics. Surprisingly enough, they still kept it in the game! This scene follows right after the above cutscene, and involves an alternate Robi robot (not the same one from Technopolis) having his arm healed by the dragon. Going by the previous scene of injured characters going to meet the dragon, and also unused graphics found for an injured man in VRAM for this area, it was likely the dragon was supposed to be some sort of healer. After Robi leaves, you can talk to the dragon, who tells you about how he expected you and how the same scenario where "himself" keeps coming to kill him plays over and over.

This scene possibly wasn't meant for the player to be there yet, but rather something that cut away to show the alternate Robi being healed. 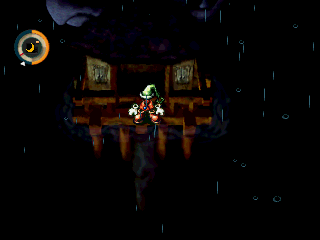 Go outside the room and you end up outside here, which the dragon calls 竜のしっぽ (The Dragon's Tail). You can catch up with the alternate Robi below who will tell you how the dragon healed his arm. Once you reach the bottom of the screen to go to the next, a transparent copy of the player's sprite appears and heads up the screen, presumably depicting the repeat of the scenario the dragon was talking about. 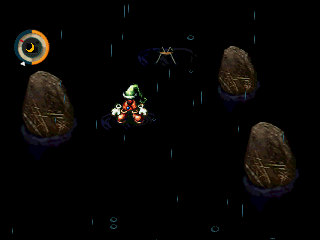 This next room is the last, and is another part of the Dragon's Tail. If you go to the bottom, you just end up back in the same room. There's not much to see here. 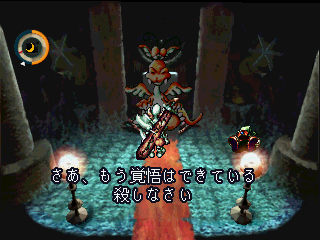 Use GameShark code 80111610 003B before the Love-de-Lic logo vanishes and then walk up into the Dragon's Room. Talk to the dragon and you'll get to watch an originally planned ending scene. Once it's over, the screen background breaks away, leaving the player stuck in pitch black.

Several events that don't occur normally within gameplay can still be seen with the proper code.

Fred in the Throne Room

A leftover from an earlier script for the event where Fred sings. You walk into an empty throne room and can talk to an invisible Fred in front of the throne, who says he feels more confident now and to come back on Saturday to see him perform. Unlike how Saturday is always called 山びこの日 (Echo Day) in the final script, he refers to it as 土曜日 (Saturday) in this one.

Collecting Soap for the Old Man

Once activated, go to the old man's door and he'll call you over to the bathtub (or TNT barrel). His sprite is invisible, but the event seems to still work. He tells you he's run out of soap for taking a bath and wants you to take a soap dish over to Curio in downtown, who will sell you a new bar. You'll receive the soap dish, but there's nothing else that seems to be programmed for this event. If you show the soap dish to Curio, he just tells you to hold on to it and doesn't recognize it.

Meeting the Hero's True Form, and His Fate

This shows more to the story and stuff that isn't normally seen with just the level cheat to access the Dragon's Room and Dragon's Tail areas. You'll start off with the Hero in front of you, who, after having killed the dragon (that is, himself, if you follow along with the lost ending above), has transformed back into his former self as a young boy, who's actually Gramby's missing grandchild Takkun. After talking to him, take him to the Dragon's Room and then a scene will play out that shows that now Takkun has to compensate for all his unknowingly-committed actions as the Hero. A whole group of people and animals will line up outside waiting to be healed by him. Be sure to speak to all of them, head back inside the room and talk to everyone there, and then go back outside and onto the next screen. There you will meet Florence and Tao, and eventually the rest of the events will play out all the way up to when the dragon heals Robi.

Items cut for one reason or another are still left inside the game's code. Use GameShark code 80111B70 00?? (where "??" is one of the below) to put the following items into the first slot of your inventory.

Digit: 01
Probably ditched when it became obvious how monotonous the task of having to pull this out of your item list would be each time you want to look at a monster's data. If you show it to Yoshida, he'll recognize it, but besides that there doesn't seem be any coding left over for it. If you use it in front of a monster, it doesn't do anything.

Digit: 36
Would have been sold by Curio to complete the scrapped event where you show the soap dish to Curio and he sells you this. Yoshida doesn't recognize it, but Curio will buy it for 75 yenom.

Digit: 3A
In an earlier script, Pappas wrote picture books instead of comics. This item is a leftover from that time.

Digit: 3D
Unknown purpose. Yoshida doesn't recognize it, but you can sell it to Curio for 75 yenom.

Digit: 3E
You can still receive this item by viewing the unused event listed above. There doesn't seem to be any use for this item that was left programmed in.

From the very beginning of the game within the game. You can see a smaller version of this flag at the entrance way to the castle, but this larger version isn't ever seen.

From Gramby's house. She uses one that looks just like this, but this one is smaller.

Gramby's chair again, but you never see it from this angle.

You can see a mini version of this portrait on the wall in Gramby's house, but can't ever view it this close. It was later used for the physical Nintendo Switch Premium Edition for the cover of an included CD.

Towards the end of the game, you can usually find Clis in a booth with this same art. This sign is loaded into VRAM but never used. The art here is more facing the player, rather than being somewhat a slanted top-view like the booth.

Two variants of the END that appears at the ending.

Loaded into VRAM at the town area.

Also loaded into VRAM at the town area.

Possibly was a scene intended for before meeting Takkun. You can see they were trying to link the dragon to him with how he's growing the horns and also has little wing graphics accompanying him.

Unknown purpose, and it's not certain if it's meant to animate this way. Loaded into VRAM during the debug room area. 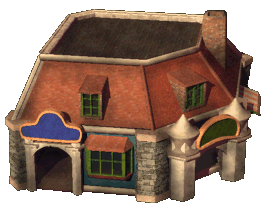 Technically not unused. You usually only can see the right entrance, while the front entrance to the left is always covered by a tree. You can usually still see part of the blue sign. though.

Probably from a time when the maps were different. The one used in-game is a different color and points upward. 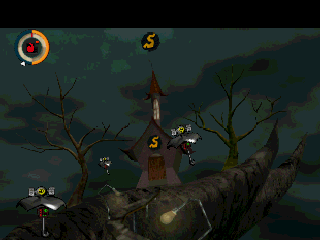 Another graphic that's not visible during normal gameplay. If you mess with the game and look above the entrance to Hagar's Labratory, you can see a pole sticking up with his S logo that's not normally visible.

Quite a number of unused sprites and other things are hidden away in VRAM in numerous parts of the game.

Hanging just like how your regular costume is before Grandma hands it to you, this is clearly an earlier design of the player's costume.

Loaded into VRAM in the same area with the above sprite. It looks like a baseball cap and attire.

At the same area as the other two, this one's like the main costume in that it's separate parts that float like Rayman. Much more closer in resemblance to the Hero's costume than the player's.

As seen in the debug room, this sprite's full set is loaded into VRAM. Perhaps code is still buried within the game to allow you to play as it?

Loaded into VRAM in Gramby's house, this appears to be an early template for a character. No suitable palette could be found, so this was the closest possible.

This animation doesn't appear to be used anywhere. 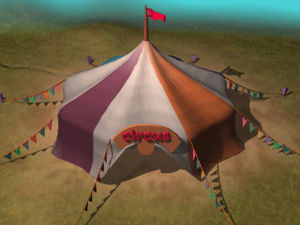 This picture is from the circus tent, taken from Love-de-Lic's old website. While the area goes unused, it still appears in-game as a background for when you go to sleep, albeit blurred.

This character and his sprites are loaded into VRAM during the night class scenarios with Yoshida. The old official Love-de-Lic webpage for Moon mentions this character as being Dancho, a character who originally was going to live in a circus tent area that was cut. In the final game, there's only one frame of him from the back and he never speaks. None of these sprites are ever seen in-game.

This man's graphics are loaded into VRAM in all of the unused areas. Another character who apparently was probably going to meet the dragon for healing like Robi.

This character is loaded in VRAM during the cutscene where everyone lines up outside the Dragon's Room.