This is a sub-page of Mother 3.

There are many unused enemies in the game, and most of them also have unused backgrounds.

The most notorious ones, shown in the video at left, are a series of placeholder enemies with glitched names who use a sequence of morbid backgrounds, reminiscent of the final battle against Giygas in the two previous games. Shigesato Itoi mentioned in an interview with Nintendo Dream that he originally intended the final boss to be a nightmarish sequence without any dialogue in the N64 version, but the tone for the GBA version was dialed back a bit for being too dark; the graphics shown above might have been remnants of the original plan.

These background graphics are not used with any enemy in the game. There are some more, most of them being variations of the skinny Pigmask guy.

These are leftovers of the scrapped final boss battle Itoi mentioned in his interviews. To view how these graphics were supposed to appear in-game, refer to the video above.

Since they cannot be approached from behind, many bosses and mini-bosses have unused back sprites. They include the Strawberry Slime, the Cactus Wolf, the Forlorn Junk Heap, the Surprise Box, the Almost Mecha-Lion, the Steel Mechorilla, Master Eddy, and the Firefly.

The Masked Man also has a "back sprite" which shows him unmasked, similar to the one where he reveals his true identity, but still holding his arm cannon. It's notable that he doesn't hold a sword.

This enemy, Alkaline Man, is an extremely interesting and original palette swap of Battery Man. He is sadly unused, and thus we never get to see his wonderful sprites.

As seen in the video above, the Tiny Forest is an unused enemy and the only other enemy to have unique sprites.

An unused bear sprite with some honey on his claws and teeth. In the game, an item named Honey Shower allows you to summon bees to hit enemies, but sometimes the narration says that a bear showed up instead; no bears actually appear graphically, though. This bear is associated to enemy 00, an enemy that can't be fought.

A palette swap of a Navy SQUEAL. This Pigmask is associated to enemy 100, an enemy that can't be fought because of how the RAM handles enemies. (MAX value FF) This can be seen by using this branch of Jeffman's Funland. This is also the last enemy with a sprite.

In the final game, the Barrier Trio never leave their spot. You walk up to them and the battle quickly begins. Because of this, a large set of sprites go unused. This includes full walking graphics and a very awkward dance that wouldn't be entirely out of nature for the Trio to do.

A set of graphics of the Masked Man exploding, floating, being repaired, and firing his arm cannon Mega Man style. With those first three unused graphic animations, it could be an unmade cutscene somewhere where the Masked Man is being built.

Two sets of sprites showing Porky inside of a pod of an unseen machine rather if it's a part of an early spider mech or something else. The first set shows Porky closing his pod, while the second shows the pod being destroyed; it was wobbling around as if it's floating until it crashes onto the floor leading Porky moving his arm and dies. Unknown of what its purpose for his death, there might be a original plan that Porky meant to die instead of being immortal due to excessive use of time-travelling and send himself inside of a capsule as a punishment.

There is still an early Porky Bot but this time being destroyed. From the first sprite animation shows its head being upside down, getting ready to fall down. The second sprite animation shows it being fell down to the floor and broke its head into numerous of pieces as sparks flying out from it. It appears to be a cord on the backside of the robot at the end of the second sprite's animation so its cord might be plugging to a outlet of a wall or something.

In the game files, there lies two strange graphics of Duster and older Kumatora in unused clothing. They appear to be teleporting, but it's very different from the PSI Teleport used in the Mother trilogy and is most likely unrelated; since there's no other town besides Tazmily Village and New Pork City, it's for the best. Though, what the graphics could have been used for is anyone's guess. Kumatora's outfit bears a striking similarity to her waitress outfit used as "Violet" during chapter 4 at Club Titiboo. It's possible this has something to do with the cut dialogue of Kumatora mentioned about her being Ionia's apprentice. The outfit is very similar to one a Magypsy would wear.

Kumatora shouting out in her unused clothing.

Another vague animation with older Kumatora in her unused clothing, yet again. This graphic show her throwing something or probably used some sort of PSI power in a cutscene.

Found in Aeolia's graphic bank, these unused sprites show what appears to be a very young Kumatora in winter clothing. It's possible that during an earlier storyline, which spanned over ten years, a younger Kumatora would have been playable on Snowcap Mountain.

Unused sprites of the Item Guy's tent pitched to the ground.

Sprites exist of the Item Guy's cart door open, revealing a person inside. According to an unused memo, this was meant to be a healer.

Duster and the party using plain rope to hang onto something. It's possible that this would have been used while the Rope Snake was out of the party during Chapter 7.

Some text that resembles the "End?" text that appears in the ending.

Tiny sprites of Salsa. Since they're in the same style as the small player sprites during the Refrigerator scene, it's possible that Salsa would have originally been in the party during Snowcap Mountain or might have a more longer role somewhere in chapter 7.

Flint stabbing something, most likely the Mecha-Drago, with the Drago Fang. This could be an original idea for Flint to violently kills a Mecha-Drago instead of being stopped by Alec with a tragic reminder about the future of a young Drago in a cutscene. 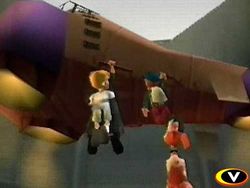 Sprites exist of Flint clinging to the airship at the end of Chapter 5 who, according to the Mother 3 (EarthBound 64) trailer at Spaceworld 1999, would have replaced Kumatora in the party at this point in the game.

Wess does have a rocking chair in his house, but he never sits in it.

A rocking chair that is found with the previous graphic of Wess.

At the end of Chapter 2, there is a graphic that closely resembles to this unused one, but it lacks the bubble. This animation is used in the second unused attract mode cutscene 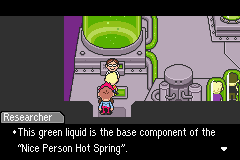 In Chapter 8, Porky's method of brainwashing is introduced.

These are very creepy sprites of Bud and Jackie. Due to the characters facing only one direction, they weren't meant to be talked to casually and were meant for a cutscene. There are many other sprites of people surrounded with this specific type of sparkles and, since it is indicated in Chapter 8 that Porky has a method of brainwashing people, it is likely that Bud and others were meant to be brainwashed.

This sprite is of Bateau knocking on a door. It resembles Thomas's knocking animation that is used in the first chapter. This animation is actually used in the second unused attract mode cutscene.

An animation exists of the pig-shaped vending machines dispensing an item.

A dummy graphic, whose sprites are copied at least 24 times in the rom, that is often used as the overworld sprite for unused enemies, such as the Tiny Forest. It resembles a Slime from the Dragon Quest series. Some of these sprites appears on an unused cutscene.

Another dummy graphic, depicting an immobile naked man, which could have been used as the placeholder for NPCs on the overworld. It appears if the party gets a game over when Kumatora is in the lead (impossible to happen without the use of the Debug room).

In Chapter 8, in the toilet dungeon, there is an inaccessible room which contains an unanimated toilet overflowing. The animation of it overflowing is loaded with the other room graphics.

An alternate sign for the Sheriff's Office exists, with more compact letters and a star.

Unused signs exist for the Yado Inn and Thomas's Bazaar with the name "Hotel & Saloon" and "General Store". For the "Hotel & Saloon", it's possible that the graphic could've been used somewhere in chapter 3 as Tazmily Village starting to get modernized in Chapter 4. The Yado sign was probably meant to be displayed on the right side of the building, while the Bazaar sign "General Store" was possibly an earlier name for the store.

A sign that says "JUNGLE DOME" and has a bunch of arrows pointing up. It was possibly displayed right before the party entered the Hippo Launcher floor in the Empire Porky Building.

Larger, custom sprites exist for the Sky Runner, the Runaway Five tour bus, a taxi, and the Yellow Submarine in the Hall of Memories. In the final game, their sprites are directly taken from EarthBound.

A very jagged rock that wouldn't look out-of-place in an area such as Drago Plateau or the location of the final Needle.

A statue of Buddha.

A pig version of a bear skin rug.

This is loaded while the game is showing Nowhere Islands in the intro. However, it's covered up by the body of water surrounding the islands, making it invisible unless the player uses an emulator's tile viewer. It says 仮, which means "temporary".

A low-quality picture of the Ostrich Burgers Historic Summit Inn Cafe on Route 66. It's possible that it was simply inserted into the game to test how the game displayed graphics. It seems to closely resemble the Dur-T Cafe found during the Highway section of Chapter 5.

These unused graphics are actually more remnants of the lost coupon mechanic! 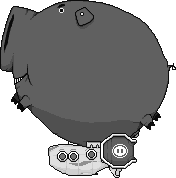 A giant grey pig attached to a ship; likely an early Pigmask zeppelin. This would probably explain the "waste products" the party will find occasionally around Pigmask-occupied locations.

A weird yellow Pigmask. Interestingly, the "foot" of the left sprite is actually a fix for the Pigmask's left eyebrow, which uses the same bottom pixels as the right eyebrow. The right sprite shows what the Pigmask should look like with the eyebrow fix added. Yellow Pigmasks, outside of a mask Boney wears during the Chimera Lab sequence and the unused Navy SQUEAL palette swap above, do not exist in the final.

This game has an entire small kanji font for displaying names, but there is no way to input kanji, so it goes unused.

Six ending images go unused. The fourth image is optional and not the correct solution for that scene.

(Source: Jeffman)
Retrieved from "https://tcrf.net/index.php?title=Mother_3/Unused_Graphics&oldid=824013"
Categories:
Cleanup > To do
Subpages