They took a while to make it is what I'm saying. 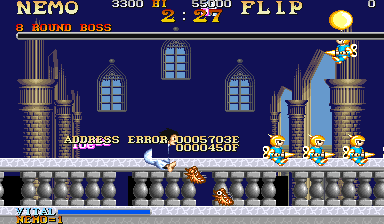 An error handler is built into the game. The following error types are listed at 0x000598 in memory: 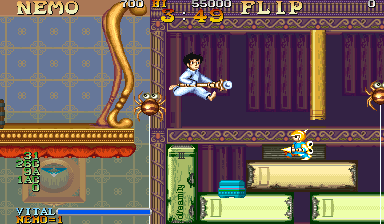 By default, this will enable some coordinate and difficulty information on the bottom-left of the screen...

Depending on the value of certain dip switches, more options are enabled:

Two levels were cut from the game. They can be accessed by changing byte FF8515 to the given level ID just before a level cutscene starts, or by using the in-stage debug mode mentioned previously.

A short level with Nemo and/or Flip riding a long set of stairs, based on the part of the movie just before Nemo meets King Morpheus. This was originally the level that came after Stage 1. 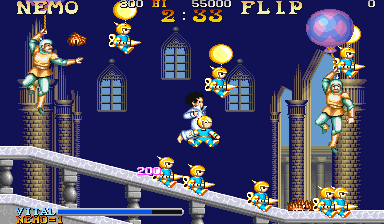 The level ends rather unceremoniously when the boss is cued to appear. Since the boss was taken out of the game, the level crashes. Fortunately, a flyer screenshot shows what it looked like.

A remnant of this stage is still present in the final gameː Stage 2: Slumber Land begins with you jumping down from a set of stairs.

This is a vehicle level where the player rides on a goat car, based on the musical part of the movie where Nemo and company used that same transport. It was meant to be after the Slumber Land level. 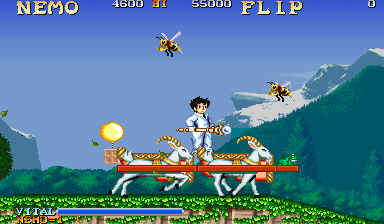 The player must contend with bees and soldiers riding on ostriches. There is also a section that recreates the part in the movie where the car hops across alligator heads. 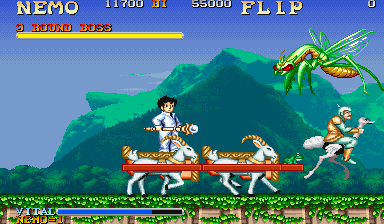 There's a boss at the end of the stage, making this level entirely playable! It's a giant mantis that shoots red blobs at the player.

When the boss is defeated, the game thinks that "Round 0" has been cleared. Completing this level leads to the Police Station stage.

There's a graphic for a desk at the beginning of the Police Station stage, but it was mistakenly put on the background layer so it can't be seen behind the foreground tiles.

Sound 77 is supposed to play when the Nightmare King is defeated. In the "World" sets, this sound is interrupted by the generic "enemy defeated" sound effect. In the Japanese set, this sound has a greater priority, allowing it to play properly.