This is a sub-page of New Super Mario Bros. Wii.

Sometimes there's stuff drawn or written on tileset images that is invisible due to the alpha channel. They can be found on many invisible tiles used only for collision, and indicate the type of each. They may have been used in Nintendo's level editor. 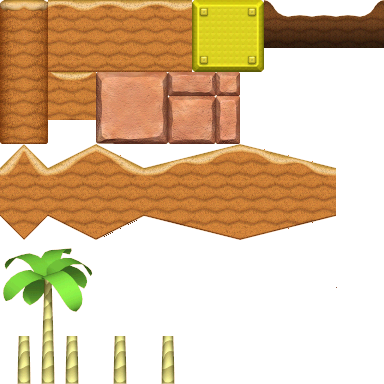 The desert tileset (Pa1_sabaku.arc) has a simple collision-less palm tree object (like in New Super Mario Bros.) that goes unused in the game. It was replaced by animated 3D sprite palms that you can stand on.

This tileset also has graphics for upside-down slopes, but none of the tiles are even assigned to objects in the tileset.

Pa1_toride.arc 's first tile is a pink block. It's assigned to a lot of objects, but none of them are used. The block itself bears a resemblance to ones that appeared in E3 2009 screenshots, but most likely was 'dummied out' via recoloring.

As seen in pre-release screenshots, snow levels were meant to use a gray variation of the basic block tileset. They went unused in the final game, but the file is still present (Pa0_jyotyu_setsugen).

The credits sequence stage gets its own standard tileset. The only tiles used there are the invisible solid ones, so the rest go unused. It appears to be a version of the main standard tileset rendered with an early alpha mask that no longer matches the texture. Most notably, the silhouettes of two arrow signboards and a climbable pole can be seen, indicating that these were once part of standard tilesets. (They are both 3D models in the final game.) There is also some sort of vine or stony ladder. The donut block is also depicted in-tileset, instead of having a blank space - in the final game, a 3D model is drawn over the tile, making any in-tileset graphic pointless.

obj_block.arc contains an early design for the block roulette, similar to the one in New Super Mario Bros.. It also includes early icons for the powerups. Note the change of Mini Mushroom to a 1UP in the final, and lack of Ice Flower in the early design.

There's an early coin file (coin.arc), which contains a flat model and a texture of the coin from New Super Mario Bros..

While this texture from New Super Mario Bros. is used to mark the course spots on the world map models, it's invisible in-game.

obj_dokan.arc contains broken pipe models that would be used by the unused Mega-Mario flying pipe actors. As you can see, they're a bit lacking in texture, though. 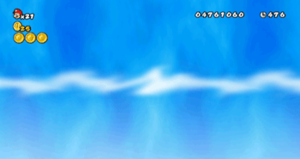 Seen in E3 2009 footage, this fantastical 2D background was replaced by more realistic ones. 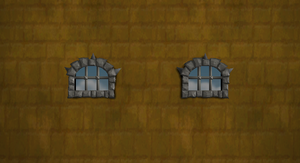 Called boss_hikousen_bg (boss_airship_background). It doesn't look anything like an airship, though. It uses a different filename format (the others just use numbers) and internal file layout to the other backgrounds.

The file that contains textures for the stage icons in the Coin Battle and Free-for-all multiplayer modes has an icon of Larry being battled by Mario, named im_W1_toride_00.tpl. It's never displayed by the game, as it uses im_W1_toride.tpl for the W1 tower icon. What's interesting is that it shows how the early Larry boss platform looked. It's also unique because Mario is in the image, which doesn't happen in any other Coin Battle icon.

Found in the pink extending mushroom archive (lift_kinko_yoko.arc) is an early texture for the end of the stem called lift_kinoko_yoko_kasa, the final is called M_kinoko_yoko_kasa. 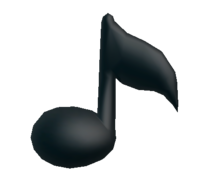 A music note, which appeared in pre-release screenshots, is still present in the game's files (note.arc).

The file env_wind contains some cloudy textures similar to those used for the usual cloud/mist effects. These textures, however, have writing all over them. According to the text, the first three are meant for regular stages, while the last three are meant for desert stages. Since the textures are almost entirely white with transparency, the above image shows the files on a black background. The original files can be found below.

The final game only uses one type of wind effect, and its textures are stored as wmy_bgsnow.3 (and 4 and 5) inside env_snow.arc. It's also handled by the same sprite as the falling snowflakes effect, and uses most of the same code. It is only used in World 2-4, a desert level.

The Prickly Goomba enemy from World 9-7, which uses the model kuribo_iga.arc, has an early model under the name iga_kuribo.arc. It lacks the frames for the Goomba's eyes and has different animations. Oddly, the enemy actually loads both models, though only one is used. 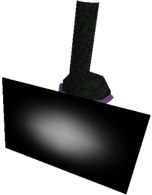 This has a similar name to the Balloon actor that contains Super Mushrooms and revived players, so this model may have been an early model for that.

The world maps have 3D diamonds that mark the path spots, but they aren't visible in-game. 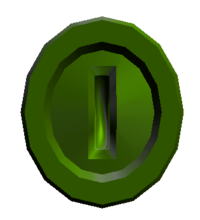 The coin object file (obj_coin.arc) contains a model and texture for a green coin, but it never shows up in-game. It was originally going to be used as the "collect 8" object in the enemy world map ambush courses, but it was later replaced by Toad Balloons. The Toad Balloon object is still named EN_GREENCOIN by the game. Green Coins are used in the sequel New Super Mario Bros. U, with basically the same appearance but a different functionality.

There are two files for a normal, non-icy snake block; block_snake.arc and snake_block.arc. They both contain a texture similar to the one used in New Super Mario Bros.. For some reason, snake_block.arc 's texture is of a higher resolution. snake_block.arc is unused.

The purple climbable pole found in 3-Ghost House is rendered as a 3D model and is a "sprite" (as in the in-level-file representation of an actor). An unused 2D version also exists as a tileset object, and has somewhat different coloring and shading. It's actually fully functional if placed in a level. Tileset object poles like these are used in castles in New Super Mario Bros..

The sledgehammer (lift_zen_hammer.mdl0) that appears in World 8-6 has a duplicate inside the Tower Boss Door archive (obj_door_torideboss.arc).

Many models contain duplicate (or near duplicate) textures.

A black unused cube is found in BGM_Anim_Dummy.arc in the Object folder. This model is used to implement the coins and question/brick blocks in some levels (particularly in World 7) which hop back and forth in time with the music. The hopping/dancing movement is an animation on the model, and the in-game object changes position along with the cube. The cube itself is normally invisible, but can be made visible by setting a specific global variable to a non-zero value. (In the European/PAL version, set the byte at RAM address 80935D80 to anything but 0 to show it.) 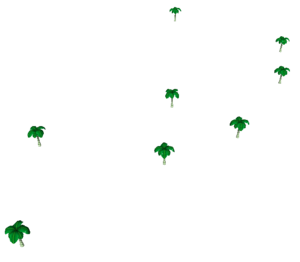 The model CS_W3_Palm is an arrangement of palm trees meant for the island-themed world. This indicates that the island-themed world was originally going to be World 3, just like in New Super Mario Bros., instead of being World 4. To further support this, the name of the tree texture in both models is W3_YashiA. The texture used by the World 3 version is twice as wide as the final version, adding more ridges to the tree leaves. The tree arrangement barely matches with the terrain of World 4 at all, with two of the trees being higher up than the ground and none of them being at beach height. It also only has 8 trees, all the same size, rather than the 18 trees of two sizes used in the final version.

Other World Map texture names also suggest that World 3 was once the island-themed world. In addition, the actor responsible for displaying the palm trees on the World 2 and World 4 maps is internally called WM_CS_W3_PALM. 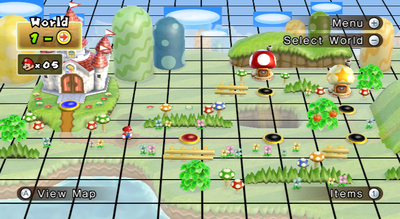 In cobGrid.arc in the WorldMap folder is a simple grid, most likely used by the mappers to create world maps.

The following Action Replay code (for PAL version 1) makes it replace the castle and start arrow in every world:

The Big/Medium Goomba model has one unused animation for being stomped. These Goombas split into smaller ones once stomped, and fly off the stage when ground pounded, leaving this unused.

These both were likely used with early versions of the model, because they do not fit the current bone structure of the model and look wrong when these animations are used through hacking.

As seen in this video, if Yoshi is hacked into a tower/castle level, he has an unused animation at the beginning of the boss fight depicting him preparing to fight, though his rider seems to be in a bit of a strange position, as this animation shows him standing upright. This suggests that either Yoshis were planned to be in a tower level, or players were able to carry Yoshi across levels during development (similar to Super Mario World).

Retrieved from "https://tcrf.net/index.php?title=New_Super_Mario_Bros._Wii/Unused_Graphics&oldid=981812"
Categories:
Cleanup > To do
Subpages