Over Horizon is a side-scrolling space shooter in the vein of Gradius and Life Force. Despite being featured in Nintendo Power's Classified Information section, the game never saw a release in the US. 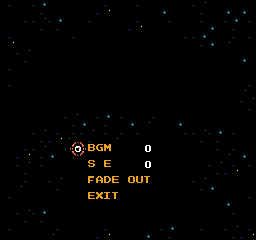 In the Japanese version, hold Select + Start + Up and press Reset to access the sound test.

For some reason, the button code and sound test screen were removed from the European version. However, the programming is still present and functional, and can be accessed by changing RAM address $6C9E to 0E (only the cursor and track numbers will appear). 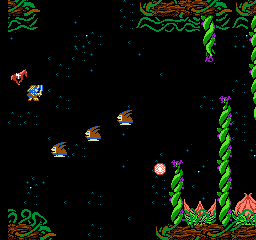 Holding A + B at the title screen and pressing Reset will net you this bizarre alternate graphics mode where you control a samurai and horses battling with katakana; in addition, there are even more insane graphics in the Japanese version (it appears they cut out quite a few graphics for the European version).

Enter the Game Genie code PUNSTSZL (ITXIAVTT in the Japanese version) and press Start on the title screen to access a very strange scene. In this rough, storyboard-like sequence, the player is shown facing off against a large enemy, which is similar in appearance to the final boss. After a few seconds, two ships fly towards the enemy, deploy grappling hooks, and pull it offscreen. After the sequence ends, the staff roll is displayed.

Although the enemy depicted in the scene is not animated, it does have several facial expressions in the ROM, similar to the actual final boss.

It's worth noting that both the final boss and the unused enemy somewhat resemble the fully-grown version of the "baby" that appears after the credits.