Pengo is a Swiss stop-motion claymated television series penguin who kills Sno-bees by crushing them with ice blocks.

Animations for the Pengo and Sno-bees in the intro walking away from the screen. The last four levels of depth are used for the Pengos and Sno-bees until they reach a certain distance on the intro before swapping to the front and side-facing sprites, leaving the back-facing ones unused.

One of Pac-Man's sprites, the sixth frame of his death animation, can be found within the game's graphic banks. This is the only remnant of Pengo being built off of Pac-Man's hardware.

In Sets 1 and 3 (see below), this track is played during the maze drawing sequence. It's unused in sets 2 and 4. 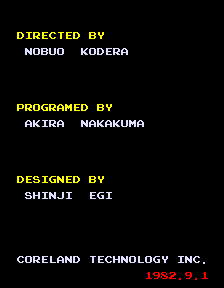 A hidden credits screen can be seen by holding Up and Button 1 for both players, then pressing 1P Start.

Two other chunks of developer text can be found in the main CPU. The first starts at 0x251C:

The second begins at 0x4D00 and gives credit to a fourth staff member. Note that each line is repeated 48 times!

There are four distinct versions of Pengo in the MAME romset: Set 1 revision C, Set 2, Set 3, and Set 4. The chronological order seems to be this:

Most Sega-published home versions of the game appear to be based on Set 1C, retaining the ACT text and maze drawing sequences, although they usually replace the main theme with a unique song.

In Set 1C, the test mode's dip switch display will not properly track the number of points needed for a bonus life. Fixed in all other sets.

In Set 1C only, each stage is referred to as an ACT. For whatever reason, this was changed to RD in all other sets.

Set 1C's default high score names spell out "AKIRA" vertically, the name of the game's programmer. All other sets list a "MMIZU", who might be a different member of the staff, but that name doesn't come up in the game's code at all.

Strangely, the competently played demo from the other 3 sets was altered in Set 2 so that Pengo dies almost immediately.

This is the speed of the curtain before each level. This was sped up in Set 2 so that it only lasts for a few frames.

Sets 1 and 3 will take a few seconds to draw the maze before each level starts.

This sequence was removed in Sets 2 and 4, where the maze is set up almost instantly.

Probably the most significant difference. In Set 1C and 3, the main theme is an 8-bit version of the song "Popcorn".

This was changed in Sets 2 and 4 to an original track, most likely due to copyright issues. This new track would later be used in the Atari 2600 and 5200 releases, alongside being remixed for the Game Gear version.

While the newer track is longer, the old track has a feature that the new track doesn't: When time is running out, the music will speed up.

Set 4 introduced a number of changes to make the game flow faster than in previous sets.

Additional changes were made in Set 2: