Candace (from the top screen) has four unused animations in total - the first two are left over from Phineas and Ferb. In both this game and the previous one, Candace has reactions to Phineas and Ferb taking damage (which increases the bust meter), if said meter is critically near 100%, or if a certain item is used, so the "sighing" one may have been for a scenario where the meter is lowered just before it's too high (as if to say, "So close."), while the other's purpose is completely unknown.

These can only be seen by performing a glitch where you position Ferb diagonally in a corner and activate his drill.

Near the entrance to the first cave in 2-1, there are 3 red balloons hidden behind the main entrance, just like the ones you see when you exit said cave. The only difference is that they lead nowhere and there are no rocket signs, plus they are never seen by normal means. 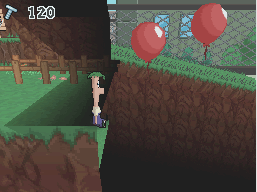 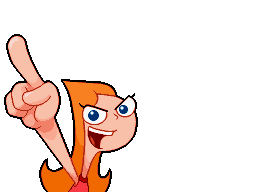 A trace of Candace from the season 1 episode "I Scream, You Scream" which would've appeared on the bottom screen once the busted meter reaches 100%.

Likely refers to Club Penguin: Elite Penguin Force. Interestingly, this game was not created by Altron, but by 1st Playable Productions, which indicates overlap or shared information in their development. Notably, many other comments and details from this game's XML file are present in that game's as well.

We can find elsewhere in the XML that 117358 refers to the "starter set", which includes several items that can are unlocked from the start.