This is a sub-page of Plants vs. Zombies (Windows, Mac OS X). 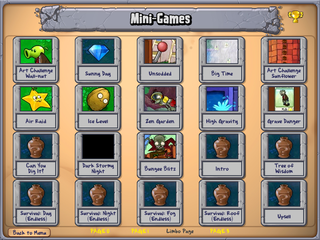 A hidden menu called "Limbo Page" exists in the game's code. This menu allows the players to access most of the unused minigames and hidden features. To enable it, change the following bytes in PvZ's process ("popcapgames1.exe" or "PlantsVsZombies.exe") by using a cheating program such as Cheat Engine.

After changing these values, a link to Limbo Page will appear at the bottom of the Mini-games/Puzzle/Survival page. Note that this also adds three other links: PAGE0, PAGE1, and PAGE3. PAGE0 is Survival, PAGE1 is the regular Minigames menu, and PAGE3 is Puzzle. Interestingly, the Zen Garden and Tree of Wisdom can also be accessed from this menu.

There are twenty unused mini-games to be found in the Limbo Page, and all will be documented in this sub-page.

The first mini-game, Art Challenge Wall-Nut, takes place on the Day lawn. Similarly to the Seeing Stars mini-game, the player is required to plant Wall-Nuts over the transparent Wall-Nuts seen on the right hand side of the lawn in order to complete the mini-game. This mini-game has the same logic as Seeing Stars, meaning that there will be an endless amount of waves the player will have to complete if they don't fill out the Wall-Nut.

The zombies that appear are also the same as Seeing Stars, those being Zombies, Flag Zombies, Conehead Zombies, and Buckethead Zombies. Any plant can be selected, including Wall-Nut itself, meaning that the player can go into this mini-game without any wall-nuts and effectively make the mini-game impossible to complete.

Interestingly, on the tiles 5 and 7 tiles ahead of the 4th row, no plants of any type can be planted on them, not even Wall-Nuts. In the 0.1.1.1014 build, these tiles had eye graphics that are not found in this mini-game nor are present in the game data. 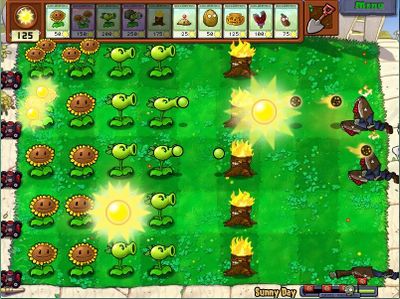 Another mini-game taking place on the Day lawn. Having four waves, the sun that falls from the sky is around twice as big, and is worth 50 sun instead of 25. Aside from that, there are no notable differences between this mini-game and regular Day levels. 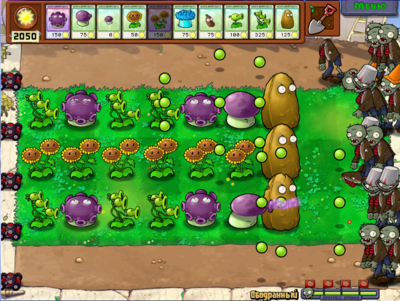 Yet another Day level, this mini-game contains four waves like the previous mini-game. The main gimmick of it is that the top and bottom rows are, true to the name, unsodded, and plants cannot be planted on them, similarly to 1-2 and 1-3 in the final game. Unlike those levels, however, zombies can still appear from those lanes, meaning that plants such as Threepeater or Gloom-Shroom are required to deal with those zombies.

Despite those types of plants being necessities in this level, any plant can be selected, and the zombies that appear in this mini-game are Zombies, Flag Zombies, Conehead Zombies, and Buckethead Zombies. Interestingly, if one were to change the save file name for this mini-game to the same name as their Survival: Endless save, an endless variant of this mini-game is playable. The top and bottom lanes still cannot be planted in, but use the normal full lawn instead of the unsodded design seen in 1-2 and 1-3. 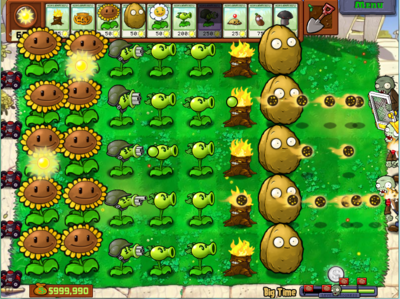 A Day mini-game that contains 4 waves like the previous two mini-games. This plays the exact same as a normal Day level, except Sunflowers, Wall-Nuts, and Marigolds are twice their regular size. This causes the Sunflower's and Marigold's sun and money drop rate to be increased respectively, and Wall-Nuts have higher health. Despite this, these plants still have the same sun cost, and are in fact the only plants to be affected in this mini-game.

Despite only three plants being different in this mini-game, any plant can be selected. Additionally, the zombies that appear are Zombies, Flag Zombies, Conehead Zombies, Buckethead Zombies, Screen Door Zombies, Football Zombies, and Jack-In-The-Box Zombies.

Also note that the Giant Wall-Nut in this level isn't the same one in Wall-nut Bowling 2.

A Fog level with only Balloon Zombies. Not to be confused with the mini-game from the DS version.

An empty level with no zombies, nor music. After some time, game over sound plays. Most likely was related to April Fool's joke level with the same name, because there's the same plants that were on the screenshot of the "new" area. How then it appeared in Limbo Page? No one knows.

A roof level that has the projectile gravity higher than any other level in the game because of how hard this level is which probably gives the reason why this level is unused.

A Night level with more graves.

Can You Dig It?

A harder version of Level 5-5. This is the only mini-game in the limbo page to have its own icon, suggesting that it was scrapped late into development.

Click on it loads the intro of Adventure mode.

By hacking the game, you will found Level 1-0 which was used for the intro. It's fully-functional, except it will crash in the final wave as the game tried to load Dog Walking Zombie, which was removed in the final version. Beat the level with hacking will give you Peashooter, then it will start Level 1-1 normally.

There were originally other endless levels rather than just Pool which is in the final game. It is unknown why these endless challenges were unused.

A Plants Vs Zombies Demo leftover. Interestingly, this screen functions exactly like the demo version with no issues.

A level that lets you dig the Wall-nuts to find squirrels before the zombie reach your house. It's worth noting that the button of the mini-game is obscured by the button of Intro.