Zombies have risen from the dead, and for some reason keep invading your home, not even bothering with your neighbors. To defend yourself, you must plant a variety of zombie-fighting vegetation. As crazy as it sounds, it's actually a pretty solid game.

An animation of the Sun-shroom sleeping while big, named anim_big_sleep.

An extended version of the Gravebuster's planting animation that has an extra bounce.

Animations of Squash transitioning from its looking poses to its idle pose.

An extended version of Magnet-shroom stealing an object from a zombie, with there being a transition going in and out of the idle animation. This version of the animation has it going back to its default pose, suggesting this and the previous animation are related.

An animation of the Dancing Zombie exiting its pointing pose.

An animation of the Snorkel Zombie opening its mouth in the Zombiquarium mini-game.

Present in the game executable are a couple of hidden debugging displays. Unfortunately, the game loses a LOT of frames when activating any of these, especially with 3D Acceleration enabled. It is wise to turn that off before attempting any of these, and even then the game could see framedrops to as low as 10FPS. In a memory editor, replacing the function at the following address based off the build with one that does nothing enables it. You can also use PvZToolkit if you don't want to mess with the functions on your own.

Decimals are displayed in SS:MS (seconds to miliseconds).

It displays the following in this format:

CurrentWave is the current internal wave the player is on; 10 is considered a game wave, and this maxes out at 40. TimeSinseLastSpawn is the time (frames) it has been since the last zombie spawn. ZombieCountDown is the time it takes before a zombie wave begins; it increases over time. ZombieHealth is the internal health of the zombies before the next wave. CurZombieHealth is the amount of internal health a wave has. HugeWaveCountdown is the amount of seconds before the huge wave starts.

The latter set only occurs on Dr. Zomboss's Revenge or the final level. Spawn is the amount of time in seconds (SS:MS) the spawn zombie action is triggered; it can be set from 221 to 0. Stomp is the time before stomping on a nearby plant if possible, defaulting to 60:00 at the beginning. Bungee is the time it takes before using Bungee Zombies to steal plants, defaulting to around 40:00; oddly enough, this also affects throwing an RV. Head is the time it takes before Dr. Zomboss is open to attacks. Health is the health of the boss; the max is 60000, and it is defeated at 1. 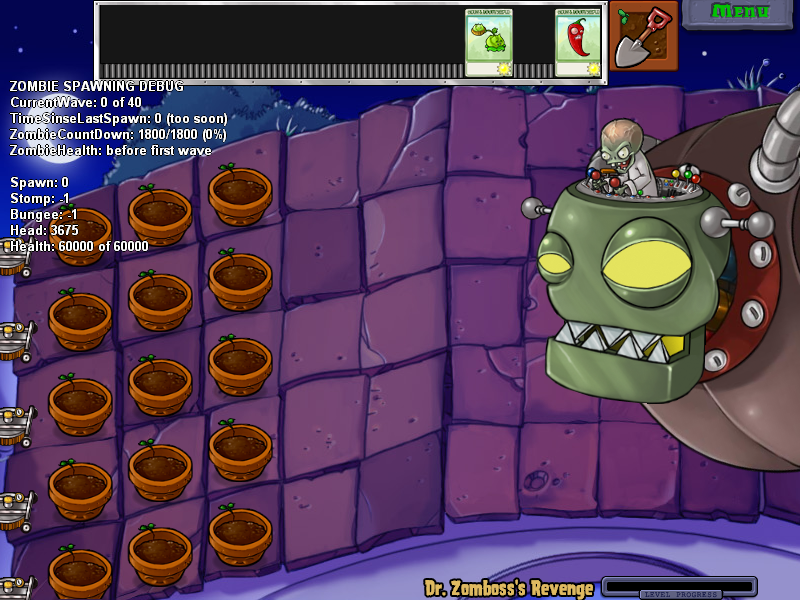 CurrentWave: Displays what wave the level is on.

Music Burst: Displays what kind of burst the music is on. More Zombies will enable this and make the music more dramatic.

Music order: Displays where the audio is playing based on the .mo3's audio location. If it is playing streamed audio it will say Music order 65535 row 16383.

Note: I was able to get a message that said something along the lines of "Misaligned hihats", though I was not able to get a screenshot or successfully replicate it.

Show's how many objects are stored in memory. Most are pretty self-explanatory 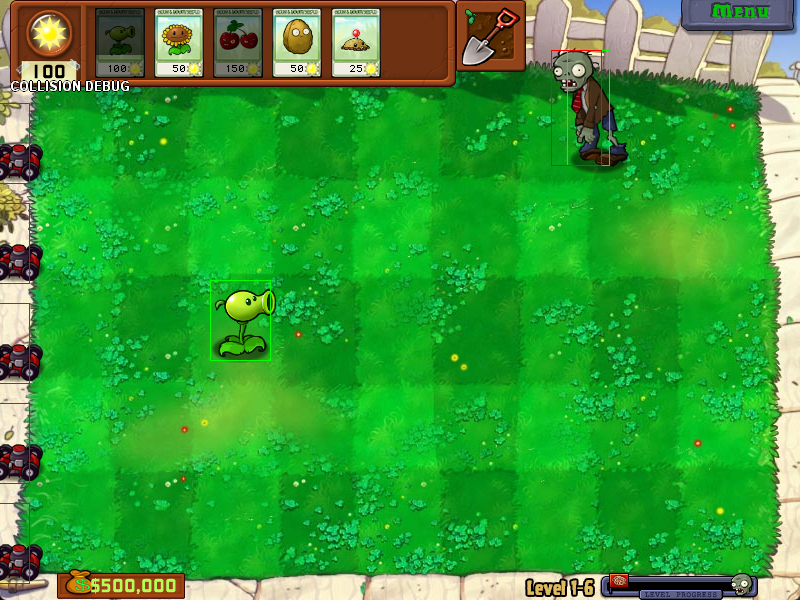 This does not draw any text aside from what's above, but displays the hitboxes and hurtboxes of all Plants and Zombies. Green is the hurtbox while red is the hitbox. Projectiles do not have hitboxes displayed. On plants that attack both in front of and behind them, the hitbox of the rear-facing attacks will be in pink.

Here is a restoration of how the song should sound with these unused parts of the sequence:

Present in images on older or Mac releases is this shell script called gamma_correct_image_files.sh.

The game executable on Windows mentions working code for loading SexyCache.exe before bootup if the debugging flag is set. In the retail version, this function has no references, but in special versions, the launch command -tod can load it; otherwise, forcing the game to load it by changing a function to one that does nothing on the following address based off the build displays this message. Yes attempts to load SexyCache.exe and the game while No just loads the game. It is unknown what exactly SexyCache.exe does, as it doesn't exist in the installation root in all builds of the game.

The only .mp3 music used in the final build is for the ending, as every other track uses sequenced tracker music. However, the game also has functions to play mp3 music during menus and levels, and even to loop/pause streamed audio, which is not used in the ending. In the 0.1.1.1014 prototype, these functions are used, as the switch from streamed audio to tracker music was only just starting to be made.

The game's executable mentions developer command lines for starting the game. Most are related to the framework and it's not friendly with commands using spaces, so use = instead. These are:

In the I, Zombie game mode, there exists two unused zombies which cannot be placed down in-game: the Zomboni and Pogo Zombie. Despite this, they have their own seed packet graphics, and via hacking, can be reimplemented in the game and are fully functional. Strangely, the Pogo Zombie will completely ignore the brain at the end of a lane, jumping right over it. Additionally, when 'planting' a Zomboni, it's front end will appear cut-off.

Normally, Cabbage-pult doesn't appear in any I, Zombie levels; however, hacking it into one causes it to animate like plants in I, Zombie, suggesting that it may have once been planned to appear.

The unused "background6" which is still very unfinished at this point.

An unused 6th level is present in the game, although not much of it is left. The only actual sublevel present is 6-1, which is simply a duplicate of Level 5-9 but with the Day theme (as the theme this level tries to use is not present in the final game), all other sublevels in level 6 are simply duplicates of 6-1 reading from garbage data. According to pre-release material, level 6 was originally intended to be a "night roof" themed level; although there is a night roof theme in the final game, it is only used for one sublevel (5-10) and does not have an entire level dedicated to it. In the December, 2nd, 2008 prototype, this level is present with more content left, however it uses a "elevated backyard" theme from even earlier in development (as indicated by the crude background graphics), indicating that they kept the level around so they could re-use it for the night roof before the idea was scrapped entirely.

Game of the Year Edition

Coincidentally, Michael Jackson actually did die a little over a month after this game's release. About a year afterwards, Michael Jackson's estate objected to its inclusion. PopCap subsequently changed the designs of the Dancing Zombie and Backup Dancer Zombie out of respect to Jackson. The new Dancing Zombie resembles a stereotypical disco dancer, and the Backup Dancers have pink shirts with mustaches. The redesign has been included in the Game of the Year version, released August 10, 2010, and all other versions since. Despite being removed, the textures of the original Dancing Zombie and Backup Dancer Zombie can be found in the game's files.

In the original version of the game, the Zomboni enemy had a different description in the Suburban Almanac than it does in the GOTY edition. Judging from the current description, it was most likely changed for trademark reasons.

In the game's executable there's a single directory to a piece of the game's source code. 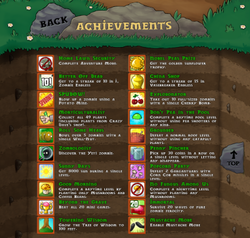 The internal name of the game is Lawn.[1] This project name was probably given during when the game's name was changed to Lawn of the Dead, and its name remained that way for some time until version 0.96, where it was changed to Zom-Botany. Whether the internal name changed during name revisions is unknown, however. Earlier instances of the game may have used Insaniquarium's codename Fish[2], as seen in the present version of that game.