Plants vs. Zombies: Great Wall Edition is an enhanced Chinese version of the original Plants vs. Zombies, containing new graphics themed around China and minor gameplay changes. It was removed from the App Store in China, due to the game's official support ending.

By using the debug build of the game, you can access the unused Puzzle Mode, as well as all the unused minigames in the original game.

It's worth noting that zombies don't eat brains in I, Zombie, making the levels impossible to beat. 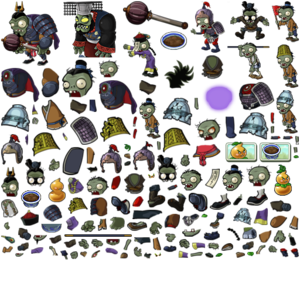 Sprites of an unused gourd plant named Bottle Gourd can be found in the textures of the game on older versions, alongside it's seed packet. It is unknown what it would've done.

Unused seed packet graphics found next to an early version of the mall button. One has a question mark on it while the other has what appears to be a human skull. What their use would've been is unknown.