Popful Mail for the Sega CD is a port/remake of Falcom's 1991 side-scrolling RPG for the PC-88. It would probably have remained Japan-exclusive had not Working Designs stepped in and given it a US release (and the less said of Sister Sonic, the better).

Working Designs also made sure that the word "biffed" remained strong in your memory. And made a few very small cosmetic changes. Just a few.

The Japanese version of the game is peppered with various plaintext debug and error messages, e.g.

Interestingly, most of these were commented out of the US version. 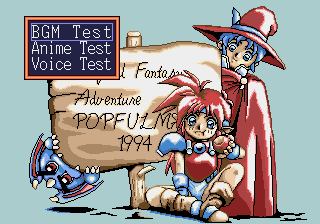 In the Japanese version, the code is instead Left, Right, Left, Right, Right, A. Since the Utilities menu doesn't exist there, the Test Mode option is in the main menu. 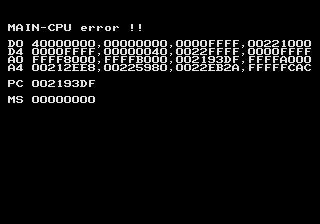 The game has a basic crash handler that dumps the main CPU's registers in the event that something goes wrong. To see it, well, crash the game. In the Japanese version, overwriting byte 0x0C of GM00.BIN (which is at 0x11780C in an ISO) with 0xFF should make this show up after pressing Start at the title screen.

The game's startup sequence was significantly altered for the US release.

In the US version, this is much more complicated: 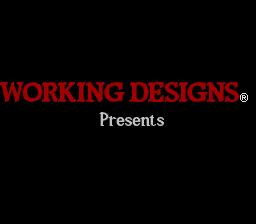 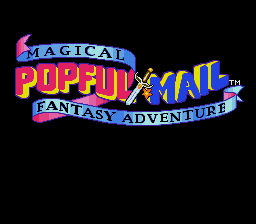 The US version significantly reworks the main menu, for whatever reason.

The US version reduces this to just New Game, Continue, a new "Utilities" option, and Quit Game. The Utilities submenu now contains the Delete Data option, as well as an extra "Options" menu. The Options menu itself is the same as the "BGM" menu accessible in-game.

The US version reformats the Save and Load menus slightly so that they display the amount of time elapsed on each file. In both versions, the most recently saved file is selected by default when the menu is opened.

Additionally, the US version will automatically close the menu and return to the title screen if it's left idle for long enough.

The US version alters the control scheme. In the Japanese version, B is jump while A and C both perform attacks (they're treated identically). The menu is opened with Start.

In the US version, A and B work the same, but C instead opens the menu.

Pressing Start now opens this new, animated pause screen, which keeps track of the time elapsed on the current file.

The Status subwindow has been expanded to incorporate the time elapsed on the current file. (All these time-related changes actually have a purpose – more on that later.)

So everything up to here is pretty much window dressing and nice little bonuses, right? Added title music, extra secrets? Well, that's not the end of it.

To start with, the US version of the game inflates many items' prices by massive amounts. A prominent victim is the invincibility-granting Amulet, which costs a mere 100 Gold in the Japanese version but 1500 Gold in the US version. Or there's the Melon, which goes for 300 Gold in Japan but 1000 Gold in the States. The sell prices have mostly been increased too, but rarely by enough to make selling things actually useful. The sell price of Gold Bullion (which exists only to be sold) was actually slashed in half from 1000 to 500 Gold.

Generally, the idea seems to have been to make healing items and buffs much harder to get. A side effect of the repricing is that while all healing items have the same cost/restoration ratio in the Japanese version (3 Gold per HP restored, versus 4.5 Gold per in the US version), the US version actually makes the two highest-end items a worse value for the money (8.125 and 10 Gold per, for the Banana and Melon respectively). Since the lower-end items are easily obtainable by backtracking, this means it's a massive waste to buy those items in the US version!

The prices of weapons and armor were left alone.

The damage done by passive hazards (spikes, lava, etc.) is much higher in the US version. The amount of damage done is computed directly from the internal ID of the current stage (the Elf Woods are 0, Treesun is 1, and so on following the game's linear order). In the Japanese version, the formula is (damage = (levelnum / 8) + 3); in the US version, it's (damage = (levelnum / 2) + 5). This results in the following table of damages in each version:

These are by far the most significant changes to the game. Per Working Designs' highly idiosyncratic localization practices, the vast majority of the enemies in the game received boosts to their stats...very, very large boosts. If you thought Lunar: Eternal Blue got it bad, wait 'til you see this.

Some of these really have to be seen to be believed, such as the cluster of four Wizard enemies just above Namo's cell in Treesun. In the Japanese version, they have an Attack of 20, and a typically equipped player at this point in the game will take 5 damage per hit from them. In the US version, they have an Attack of 60, meaning the player takes 45 damage per hit from them and their projectiles, not to mention that their HP has been more than tripled from 25 (2 hits to kill) to 80 (4 hits). Factor in that player invincibility time after getting hit is only 40 frames, that the player's maximum HP is permanently fixed at 100, and that Amulets and healing items are much more costly to get in the US version, and perhaps you get the picture: for the average player, the US version is so frustrating it borders on unplayable.

Some arbitrary tinkering was also done to the amounts of Gold dropped by various enemies. Surprisingly, it was actually increased in several cases.

When reading the chart below, bear in mind that damage calculation in this game is very simple: The damage dealt is the attacker's Attack minus the defender's Defense, or 1 if this comes out to 0 or less. This applies to both player characters and enemies.