This page details prerelease information and/or media for Bomberman Generation.

An old part of Nintendo's website dedicated to covering Spaceworld 2001 had a page showing off an early build of Bomberman Generation. 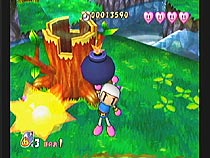 The HUD was a bit different at this point in development. The Firepower count is just text instead of an icon and there's no Lightning Card or Charabom icons. The most interesting thing however is the timer, which uses Bomberman 64's time system instead of a more standard one. Since 64 locked one of its Gold Cards per stage behind a time limit, this suggests that Generation was supposed to be the same way (the final game only does this in certain boss battles). 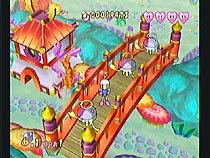 This section in OctoOcean contains more enemies than the final. Additionally, it's not possible to be in between the enemies like that. Lastly, Bomberman's idle animation is different.