This page details prerelease information and/or media for Deus Ex.

Deus Ex: The game that was seemingly made from recycled levels cobbled together and somehow made to work.

By 1994 it was named as 'Troubleshooter'[2] and proposed to Origin as a concept, where Spector worked at the time. The concepts of this game started making their way into Looking Glass' MMO, Junction Point[3].

By 1997 the concept was redesigned and renamed to Shooterː Majestic Revelations[1][4], laying out most of the ground work for the later Deus Ex idea.

The Denton brothers were named after Warren Spector's friends, Brad and Barb Denton[5][6]. The J.C. name was chosen as a unisex name as it "flowed nicely"[5].

By 1998-1999 the game had moved its title over to Deus Ex, a name of unknown origin but embraced by Spector[5]. An updated design document copyrighted between 1997-1999 details the more familiar Deus Ex that became the final build. As this document was rewritten between 1997 and 1999, some of this information might contradict itself while being true at one point.

The old LAW used to be called the "Light Anti-Armor Weapon" vs "Light Anti-Tank Weapon". The weapon would go through a redesign, losing its gray color for green, losing its sights and getting a scope instead (that was likely made non-functional later). The LAW can be seen firing in this e3 1999 footage from 0:47 to 0:50. However, it is possible this is an old GEP Gun as the design is still similar to that as shown in the Majestic Revelations v6.4 document, the homing info can be seen in the lower left, the weapon doesn't seem to be discarded after use, simply put away and a pack of rockets can be seen on the belt.

When comparing the images it becomes obvious that the additional walls were edited in. Perhaps they were added later in development to help rendering?

The entire level is different. No mess hall exists in the final design. The sick bay is made of two rooms. The ship has 5 levels compared to the 3 in the final version.

Completely different design. The area seems to be made of 3 rooms and a circular hallway.

Nothing different other than the changed text font and "subject" removed.

Different layout at the top left. Agent Hela's room isn't near the hostages in bunker 3 but is instead seemingly required to go through to get to the exit. The old layout is clearly seen to be poorly edited out of the final version. The "to sewer tunnels" text wasn't moved to the correct location in the final version.

Mainly different fonts. The compass was removed and the lower part of the image extended to fit 400px. This might've been rushed as the pink mask at the can be seen in game.

Image likely stretched from 256x256 to 400x400 for final version. The text has a different font and the internal view is missing.

The "divers entrance" text was removed. The "U.V.B bay" was renamed to the "URV bay".

Changed font and loss of text detail, possibly due to the reduced space.

Images dated from approximately May 16th[7], maybe early May[8], a month before release. These images have the text "BETA VERSION" in each corner.

From May 14th, 1999, an interview with Chris Norden. Originally for download and streaming on Ion Storm's website. The video was originally 9:47 long however the Wayback Machine only archived the first megabyte, resulting in the footage ending at 4:00. First 3:33 is the interview, the rest is footage of the character creation screen before being cut off.

A German trailer for Deus Ex, found on the German section of the Eidos France FTP site[9].

A minute long video of Deus Ex from gaming magazine Incite. A possible placeholder sound for the robot can be heard at 00:10.

Unknown video, likely official due to the logos at the end.

A promotional video distributed before release, found on the UK section of the Eidos France FTP site[10], but also some other gaming news sites[11]. Possibly recorded in April 2000?

An old version of the NYC bar theme, found on the German section of the Eidos France FTP site[12] or alternatively on the official Deus Ex site[13].

A level was planned to take place on the ruins of the International Space Station[3][4], but was cut for being too similar to System Shock.

After the space station was cut focus was put on a lunar mining base[3], the level would deal with low gravity, lack of oxygen, and a fight between a UN base and a Chinese base. The level was cut as the gameplay and setting would be too different to the rest of the game. Though the level was cut the Chinese lunar mining base can still be found mentioned in news articles in game.

The White House was the first level designed for the game, as it was believed to be the hardest to make[2]. It was designed as a place "people would just enjoy poking around in ways they couldn't in the real world"[2]. One reason it was cut was because "there was no way any then-current renderer was going to allow us to do all that [exploring the entire White House]"[2]. Large areas such as the White House had speed issues, and knowing that they would have to be cut into smaller levels, the decision was taken to cut them entirely[2]. Little is known about the levels, but a groundskeeper/gardener may have been a character that could be interacted with[14][15]. The characters and decorations (at least some) for this level still survive in the final game. President Mead, the First Lady, and their daughter can be found in the intro cinematic.

The White House level was shown at the e3 1999 demo[16]. There was a rumor that Spector was visited by the Secret Service due to the level of accuracy in the White House map. When asked about this in 1999, he replied[17]: 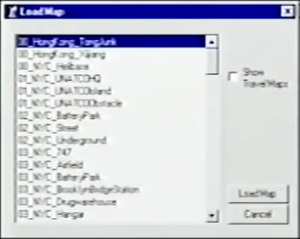 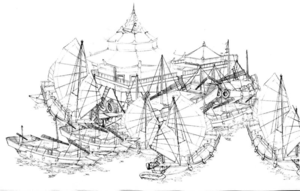 Some cut levels can be seen in the E3 footage: 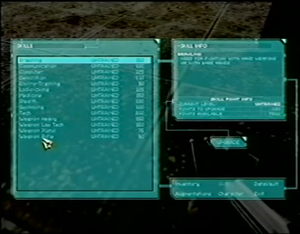 The E3 footage shows three cut skills: brawling, communication, and stealth. The brawling skill was likely for the cut fist weapons, while the communication skill was used to unlock choices in conversations, the coding of which still exists in the final game. 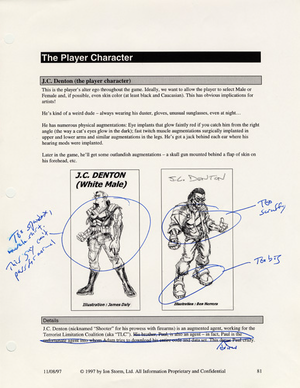 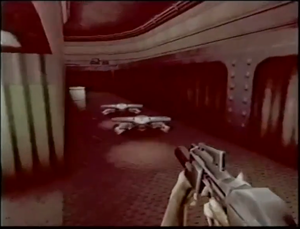 A cut robot can be seen in the E3 footage. This is likely the missing "SecurityBot1" class, as 2-4 remain in the final game.

A female variant of the UNATCO trooper was cut in development; quote from Mission03.UNATCOTroop.TroopBarks1:

Jerry Wildman, Nikolai Gusarov, and Oscar Lemiuex all have concept art, but no other information available.

The Majestic Revelations document lists additional UNATCO agents, Diane Tisdale and Nick Baldo. Diane Tisdale can be seen in the e3 1999 footage sending infolinks to the player in UNATCO and may have been the old Alex Jacobson as he isn't mentioned in the document until chapter 15. Nick Baldo was possibly renamed to Nick Baldwin, as a UNATCO office nameplate exists in the final game with that name, but otherwise no other evidence exists.

The PS10 and PS20 are both mentioned in the design document. While there's no specific info on the PS10 (at least detached from the PS20), it was a one-shot pistol type weapon that shot a single low damage round at a target (the sound for which still exists in final).

An MP5 can be seen on belt of one image and in the weapon collage. Interestingly this image is reused for a poster in Invisible War where it's called the "M-22 HotShot".

The shuriken can be seen in images and the design document, this was redesigned later into the throwing knives, which are still called shuriken internally.

The design document mentions an AmmoRocketHE, while AmmoRocketWP is missing. The WP still uses meshes and textures with the HE suffix instead of WP.

In these old screenshots a headset, keycard, access card, and torch can be seen. The headset was likely redesigned into the infolink augmentation, the torch into the light augmentation, and the white card for the White House.