Deus Ex is the epic story of a sunglasses-at-night guy who drinks soda he found in back alleys, gibs little Chinese boys with rocket launchers, lets gangbangers murder a man's daughter then says to him "What a shame.", and discovers A BOMB in a helicopter.

Once you've enabled cheats by adding -hax0r to the command line arguments, enter the console command "legend" to open up an in-game debug menu. The dump system can be enabled by adding the following lines to User.ini, with Name being whatever you like.

Greasels have unused animations for attacking while in water, with their legs swimming while they attack. The animation is unfinished in that the spit doesn't spawn at the end of the animation, however this can easily be implemented.

Rats have an unused swimming animation, however this seems unfinished with the model morphing in the process.

The PS20 has an unused shooting animation where it isn't discarded.

The PS20 has unused faces for a muzzle flash, back from when it was bullet based.

There is an unused, low detail, SecurityBot4 enemy in the game. This version has the same weapons as SecurityBot3, but has 50 EMP HP instead of 40. It doesn't have any unique sounds apart from its move sound, which is a higher pitch version of the repair bot's. Its collision size is also 27.5 instead of SecurityBot3's 25.35. 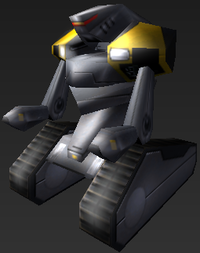 A model and texture for a 'CardReader' exists in the files, however no code exists for it. This card reader would be used with the cut access card item to open linked doors and can briefly be seen in pre-release footage. 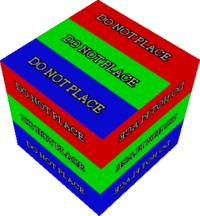 The 'TestBox' model is a red, green, and blue box with the words "DO NOT PLACE" written on it. The model usually isn't seen in game and is used for items with no world model, such as grenade ammo and NPC weapon ammo. If ammo has this model set it will use the item's name for the message when receiving ammo, rather than the ammo's name. This box can be seen in-game by carrying a body to the end of the training segment and then starting a new game, when picking up a body after this the game will be unable to place it in the player's hands and the spawned POVCorpse will be left where the carcass was, displaying this mesh.

A menu to create custom color themes can be opened with the cheat ShowRGBDialog. The loading of themes works however the saving doesn't have any programming for the save button, and just overwrites the current theme.

A color theme called "Dark Blue" exists but goes unused. Despite the name it is actually 100% red.

While the idea would be implemented in the sequel, it was here since the beginning – the titling of the player model as JCDentonMale, the choice of the gender-neutral name JC, and the fact that your gender is rarely referred to (e.g., guards saying "Thought I saw someone -- a guy in a coat." when you're spotted).

After you save Ford, he says he'll return to the Smuggler's Lair...but never actually does. This is because the flag that gets set when you rescue him is (mistakenly?) set to expire at the end of Mission 3 (the hangar mission). If you go to the lair during Mission 8 and use the command "Summon FordSchick", however, he will appear.

Ford has a set of complete and recorded conversations thanking the player and offering advice on what to do, complete with offering the character aug upgrades. However this conversation is highly unpolished as it is missing conversation branches for if the player has no room for the object and the object cannot actually be received as he attempts to give an "AugmentationUpgrade" instead of the correct "AugmentationUpgradeCannister".

If cheats are enabled, you can type the following codes for messages and some secret effects.

The lower right of the 747 image shows an additional door to a room on the top level, where the cockpit would be. This door is missing, however by removing a wall an extended area that could possibly be used as a room is revealed.

Mini-subs have an interior that is not normally seen due to the opaque window. It's possible this was hidden as the water can be seen inside the submarine when it lowers. 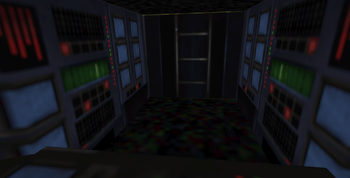 In Battery Park chapter 2 a light is trapped inside a wall, possibly due to the wall being moved back to make AI pathing easier. In chapter 3 and 4, the wall is in the proper position.

At the Missile Silo, some geometry at the stairs doesn't appear due to being prioritized before a subtraction brush.

At the Missile Silo, some geometry at the bottom of the elevator doesn't appear due to being prioritized before a subtraction brush.

A "White House" level was scrapped early in development, but contrary to speculation was not due to government intervention. Rather, it was deleted because "a few thousand little square rooms would be really boring".

Some of the furniture models were completed, and can be summoned (prefix "WH"). Also completed were high-detail models of the President and his wife, who in the final game appear in the opening video for two seconds at a distance.

WHChairPink also has 6 separate textures for its seat and its back, so this may not be how they were intended to appear.

The President, Philip Mead, and his family were likely meant to have bigger roles in the White House level. While mentioned by name and portraits can be found of Philip Mead, he and his wife, Rachael Mead only appear briefly during the intro segment when Manderley is talking. Sarah Mead is unable to be found in the game, but her model was recycled as "school girl" who can be found in Tonnochi Road and the Lucky Money club.

There was also supposed to be Secret Service agents that would patrol the cut White House level. Their textures ended up being re-colored and used for the MiB agents instead. The actor can still be spawned in world with the class SecretService.

At some point during the Deus Ex development, there was a mission in which JC Denton would have been asked to travel to the moon to confront a rogue, malevolent AI named Ada, but much like the scrapped White House and Texas Border missions, the moon level never made it into the final game. However, some of the textures for the moon base are still present within Moon.utx.

Mission 08 still has references to a character called Thomas Dieter, telling him to appear if Harley Filben is dead. If he was talked to then Stanton Dowd would appear, like if you talked to Filben. In the final version, Filben can't die, and there are no other references to Dieter in the code. 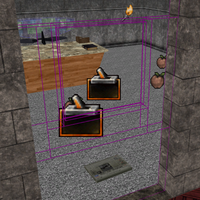 There is a newspaper in JC Denton's office the first time you go into UNATCO. Unfortunately, it can never be read in normal gameplay without noclip as opening the door destroys it. The paper reads: 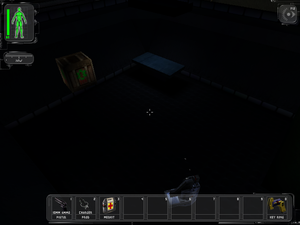 In the OceanLab labs there is a medical bot in one of the flooded compartments, only problem is that going to the area that contains the key to the room usually loads the medical bot, which makes it drown before you can use it.

In the 747 hangar there is a warp to the stowage area of the 747 hidden off the map behind the rudder of the 747. In game this isn't used as the loading ramp of the 747 closes as you approach it and the warp has been moved. This may have been due to being able to skip Paul's conversation by going inside this way. There is no warp to the hangar from this location on the 747.

On Liberty Island there are objects outside the playable area when returning.

On the first return:

On the second return:

On the third, final, return: 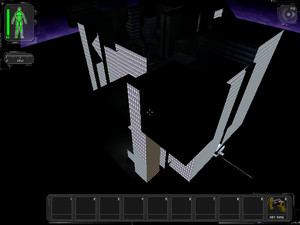 The backside of all the buildings in Tonnochi Road are covered with one of the advertisement textures, likely the placeholder texture when building the level. 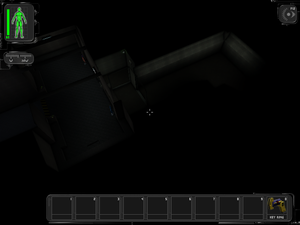 Many of the otherwise final items exist, but summoning them reveals they may have had entirely different concepts than was finally implemented. For example, the electronic scrambler grenade used to confuse bots is named "WeaponNanoVirusGrenade", indicating it would have possibly been some kind of highly-lethal version of the gas grenade to infect humans with Gray Death.

Within the list of NPC-specific attacks is a listing for cat scratches. Unlike dogs (which bite you), cats simply run away when you step on them.

As with the cats, rats have an unused weapon and instead run away.

Within many of the games UMX files, some of the samples used are named as to have hidden messages within them. Most of these are just credits from the composer of the file, but within a few there are various messages.

This file contains credits, but also contains one quote that reads: "What is your cause, and who do you obey?"

This file contains a note from one of the composers, Alexander Brandon. It reads: "my favorite ambient tune in DX... and it was Michiel's first 5 patterns that got it started - Alex." The quote refers to the other composer Michiel Van Den Bos.

This file contains 2 messages, both seemingly broken or unfinished. They read: "for the origin.systems red...your hungry" and "namely the scene and all the great artists in".

This file contains one long message from composer Alexander Brandon. It reads: "with my bowing out of Straylight productions and the release of this project you may note similarities between this piece and the style of necros (andrew sega)

if so, there is no shame as this is probably going to be my last MOD released to the public and what better way to pay homage to one of my personal favorites and colleague in arms

there is no doubt he and others have had a profound impact on my music and as my friend Josh Rodman says.. 'its one of your strengths.. don't shy away from it' peace... 2000"

This has a simple message inside that reads: "greets to the DX team song is dedicated to Steve Vai".

Another relatively simple message that reads: "I changed my name from this one."

This has 3 hidden messages within it that each read: "Samples from Necros, Sybaris, Maelcum, and elsewhere", "I've only got one thing to say... GETUPANDDANCEYOURASSOFF!", and "wee.. hellos to Chris and Bryan :)"

Deus Ex, like most Unreal Engine 1 games, uses a plugin system for its renderer to allow more flexible support for multiple video card types. Interestingly, the PowerVR SGL plugin, while dummied out, is present, compiled for Deus Ex, and works fine with minor bugs.

Of course, you actually need to have a PowerVR card to use it, and you'll need to have Kernelex 4.5.1 installed and the game set to Windows 98SE compatibility mode.

The Mac version's PICT resources include credits and an animated logo spinner from Unreal Tournament. 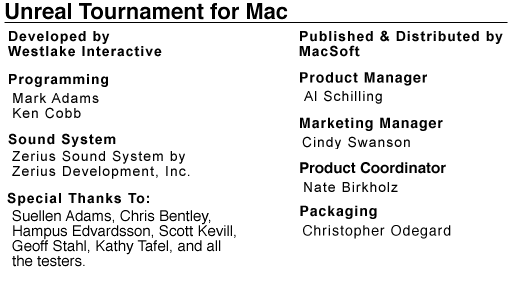 The Game of the Year edition contains the 1.112fm patch, adding multiplayer and unintentionally removes the music from Mission 08, the last visit to Hell's Kitchen, rendering it unused. However, there exists a community patch which re-adds the music to Mission 8. In detail, the GotY edition of the game contains the oldest known versions of the levels, it is likely that the Mission 08 music was the final set to be created which is why it is missing in the GotY maps.

The Japanese version of the game contains additional changes in addition to its translation: