Deus Ex: The Fall started as a mobile game and was already rife with controversy due to several design choices, to put it lightly. One year later, a mediocre PC port was released on Steam to solidify it being generally seen as the weakest entry in the series.

And as it turns out, there could have been even more content to complain about! 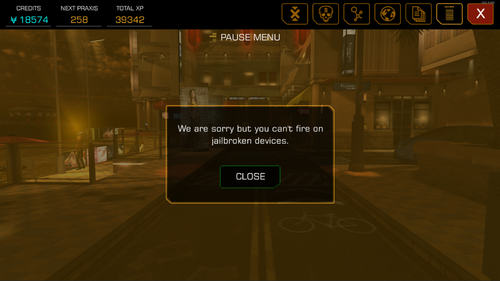 The function for firing not working on jailbroken devices still works if Globals.m_IsDeviceJailbroken is set to true.

The lines for being unable to fire on jailbroken phones still exists in the PC port, located in Resources/Stringtable01.xml.

Internally, the "Unlock the Power" achievement is called "InfinitePower".

In addition, cut level strings exist below, located in Resources/Stringtable01.xml:

Sections for Australia and New York quests exist; the Australia section is empty but the New York section has some WIP quests. These quests are hardcoded English and have no translations. Located in Streamedassets0/Missions.xml.

The following flags are stored in save files and are unused:

The following flags are stored in PlayerPrefs.txt. They count towards the total turntable models unlocked, but do not actually seem to unlock models for the turntable:

The following flags are stored in PlayerPrefs.txt:

Setting the boosts to true will increase EXP/credits by 50% when obtained. Setting god mode to true will enable an option in the settings. God mode will allow your health to lower but ignore any damage that would kill.

An "NYCop" enemy type exists, it is identical to other cops stats wise, except having a vision range of 13 vs 14:

An "Anarchist" class exists, for the NYC subway:

A "Boss" class, with wildly more health than the 2nd most, a box robot with 1300. Was Sam Duarte:

Shares the same stats as the base pistol.

Shares the same stats as the base pistol.

Almost shares all stats with the base combat rifle, with slightly better bullet spread (2 vs 2.8).

The weapon the ogres use with its strings overwritten by the concussion grenade. Uses the standard combat rifle icon and ammo. Costs 3000, the most of any combat rifle. Its stats are far more powerful than any other rifle. It is completely unusable and potentially has no player model, first person animations are not coded in.

Text provides context to some of the cut location images. Strings located in MainData/mainData_00001, textures located in Resources.

Additional information from Eliza Cassan reveals Widow's name and that the USS Intrepid level was the carrier.