This page details prerelease information and/or media for Harvester.

Harvester was plagued by several delays and content cuts, and early promotional material bears little resemblance to the final game. Even months before its release, screenshots and magazine articles would feature content that ultimately ended up being absent come release day.

A very early trailer from 1994, two years before the game released. Steve's voice is done by the actor used for his in-game sprites, as opposed to a separate voice actor like most characters in the final release. Although the game is announced to come out by Summer 1994, it was only released in 1996 after a lot of it was revamped. Of note is how much of the footage uses drawn actors instead of live-action ones and how different some of the CG is.

Also, the developer is credited as Future Vision, not DigiFX, and the publisher is Merit Software. 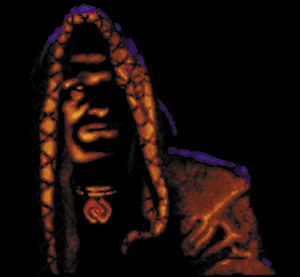 A drawn portrayal of who appears to be the Sergeant-at-Arms. DigiFX discarded almost all drawn actors in favor of live actors during development, and the Sergeant is no exception. This screenshot was posted on Harvester's now-defunct website alongside pictures that more accurately represented Harvester's final content. 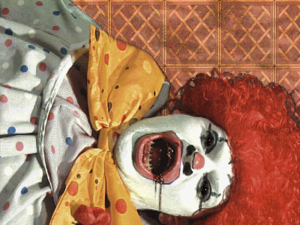 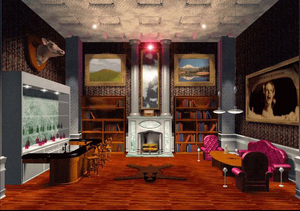 A lounge with a fireplace and bearskin rug. Seemingly an early iteration of the final release's lounge in Lodge Level 1.

A child cannibalizing her mother. This scene exists in the final release (albeit censored in in the UK version), but this screenshot shows that the room background hasn't yet been added. Additionally, the blood splatter has been significantly altered from promo to final, and the promo screenshot features odd discolorations on the mother's leg. 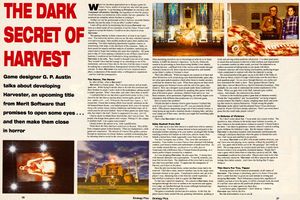 A Strategy Plus magazine article on Harvester, sporting its early design. 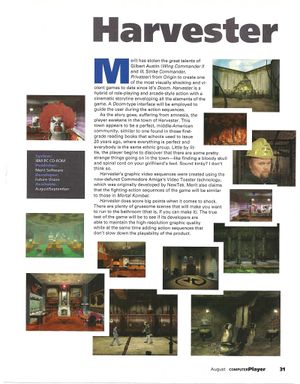