The MS-DOS version was reissued on GOG.com and Steam in 2014.

The following bitmaps (sans palette) are found in the large HARVEST.DAT and HARVEST2.DAT resource files located on the game's three CD-ROMs.

Mr. Pastorelli has no speaking lines, so these go unused.

The fireman who appears outside of the Harvest Fire Department has five portraits, but only one is used in-game.

A man in a cowboy hat, named GENDEPT in the files. Not seen in the final game. Harvester's script designed by G.P. Austin in 1994 outlines a "generic deputy" who would have stood guard at the edges of town.

Colonel Buster Monroe has a total of five portraits, but only two are used in-game. 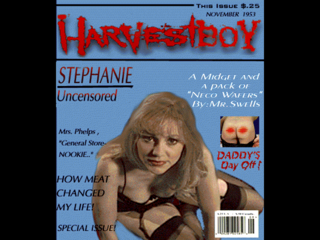 The cover of an indecent magazine featuring the game's lead female, Stephanie. Likely part of a scrapped (or joke) dirty magazine item, as this image is located alongside other examinable documents. There also exists an inventory icon for this magazine.

The early bitmap is notable for containing a high-quality digitized frame of Steve (the player character) which is not seen during gameplay.

Two very basic help screens (HELP1.BM and HELP2.BM) left over from an earlier version identified by the header as "0.3a".

The first screen describes features which are not present in the final build: Steve cannot jump or duck on his own, and backing up manually is an undocumented feature which only appears to work if a melee weapon is equipped (not counting unarmed). The attack modifier key was changed from SHIFT to ALT for the final.

The second screen mentions joystick controls which were never implemented (see below).

While the info on the Inventory Actions screen appears to be accurate, the sprite displayed on the left of Steve (with his arms on his hips) is not used during actual gameplay.

The Joystick Controls screen is devoid of any content because joystick support was never finished. 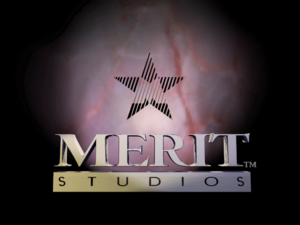 An older render of the Merit Studios logo (METR0119.BM). An updated version of the logo appears as its own elaborate full-motion video before the game begins. The screen itself is programmed as a room the player could potentially walk around in. 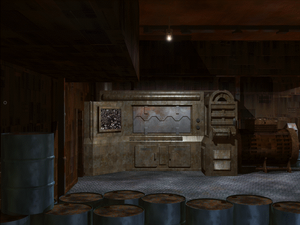 An unused room in the Lodge found on Disc 3.(FURNACE.BM). A different furnace room does exist within the Lodge, and it spans 2 .BM files, so this may have been an older version. 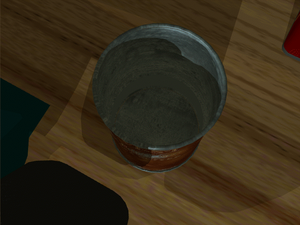 An unused bucket image found on Disc 1/2.(GARAGCU2.BM). In the remaining .BM files, there is another one named GARAGECU which is the toolbench in the garage. This probably would have been another viewable area in Johnson's garage like that. 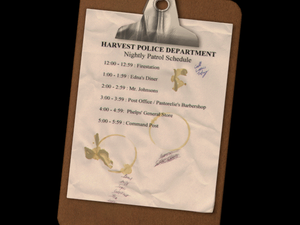 An unused schedule for Sheriff Dwayne's nighttime activity. (SCHEDULE.BM). Probably would've been something found in Sheriff Dwayne's drawer, like his checkbook. An inventory item for this does not exist within the games files.

While the player normally can't hurt Spots in the fire station, there is an animation for Spots running offscreen once the player hit him.

Every non-hostile NPC which can be interacted with is always accompanied by a mugshot of their face which displays an emotion while speaking. Most characters have four frames of animation (idle face, a happy face, an angry face, and a sad). Some NPCs, however, appear to only ever display their "idle" mugshot because their other face bitmaps are duplicates. Some characters which include a large range of duplicate mugshots are Pastroelli and Parsons (from the barbershop), the Wasp Woman, Range Ryder's corpse and the war veteran (from the Lodge). The game also references a missing secondary set of mugshots for Karin (Edna's daughter), but the game defaults to her primary set.

3 videos are present that cannot be accessed in-game. These can be accessed by doing an action that would trigger a cutscene, and then editing the video file location loaded by that action.

Found on disc 1. A video of Steve answering the phone, talking, then replacing the phone on the reciever. There is no audio, and it looks like the framerate has been sped up significantly.

Found on disc 2. A video of Steve being arrested, next to the corpses of Mr. Pottsdam and Karin. This would have played if the player killed Mr. Pottsdam when seeing him burying Karin. Inaccessible audio in the game confirms this. There is a line of dialogue where the sheriff accuses Steve of killing both Karin and Mr. Pottsdam.

An unused death cutscene. Most likely would have been used when the player interacts with the mirror in the bar on the 1st level of the lodge. Interestingly, this FMV can actually be seen in the Harvester trailers/making of videos found online.

Out of the 5,920(!) frames of animations for Steve, jumping and ducking sprites exist which never play because the player cannot perform these actions regardless of what the help screen reads.

Further, every enemy has 296 animations cells assigned to them regardless of whether they use them or not (Steve is counted as a "monster" by the engine despite being controlled by the player). Unused cells are simply 1×1 transparent filler images, although there are a few special exceptions. For example Hank, Steve's kid brother, is one of the few NPCs who cannot be killed (an invisible wall blocks your path). In this case, a set of duplicate idle sprites fill his "death animation" slot as an exception handler.

Reading through Discs 1 and 2's script file (HARVEST.SCR, after XOR'ing by 0xAA) reveals two deleted locations: SEWER2 and SEWER3, which have complete layouts but are commented out.

SEWER2 has code for spawning an enemy named GATOR, but its sprites no longer exist in the game's data. These two locations would have existed between the first sewer section under Mr. Johnson's street and the tunnel leading into his garage. Furthermore, the two tunnel internal names are listed as TUNNEL1 and TUNNEL3, implying a location in-between may have existed at some point.

Some international releases are censored. Two FMV cutscenes were removed in their entirety, both from the "Mystery of Motherly Love" section of the Lodge in which a mother is brutally cannibalized by her three children. 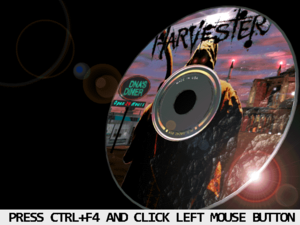 While a more detailed disc change screen was present in the retail game, a new, hastily-put-together bitmap depicted on the left is used for the Steam release, depicting the box art superimposed on a CG render of a CD. This is because the Steam version uses DOSBox as a wrapper and Ctrl + F4 is the virtual disc swapping key combination. Incidentally, the render used for the CD specifically depicts one manufactured by PDO USA (as indicated by the disc hub), rather than using a more generic design.