This page details prerelease information and/or media for Mega Man 5.

In 2017, footage of a work-in-progress version of Rockman 5 was found on an old VHS tape.

The stage select screen is incomplete, having question marks in place of the boss pictures.

Interestingly, the dropshadow in each question mark uses the palette of the respective mugshot.

Different enemy placement in this area, and the small Life Energy is gone.

The Energy Tank was replaced by an Extra Life.

In the top area a steam hazard appeared in place of the last iron ball, the Life Energy is absent, and the 1UP and enemy/hazard are in the central screen instead of the bottom, having a red B Bitter instead of steam. In the final release B Bitters are absent in Wave Man's stage, and they only appear with green and orange colors. The central area was modified, and a tube now prevents Mega Man from taking the 1UP in the lower part if he took the wrong path. 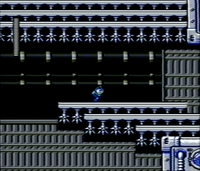 The last area with bubbles is a single screen in the final release. In the prototype it lacks the screen transition to the beginning of the marine bike area, sharing the same area.

The last three enemies (two Irucans and one V) before the sub-boss are absent in this build. 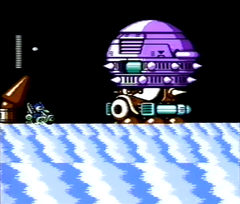 Octoper OA, the sub-boss from Wave Man's stage, had a tentacle that rises up-and-down with Octoper OA, slightly narrowing the play field of the battle and adding another obstacle to hurt the player. While removed from the final release, the tentacle graphic remains hidden in the final game.

The K (the first A outside Japan) Plate from Gyro Man's stage was hidden in a falling block, and could be taken by stepping on the block. It was changed to be below a block in the final version. Also, the plates are smaller at this point.

The elevator cables were different.

The M Tank appeared in the room of the C (G outside Japan) Plate...

...and the C Plate appeared in the M Tank room.

Different enemy placement in this area.

One extra Turban was included after the Rock Thrown. Some action took place in the beginning of the area before being shown, so it's unknown if enemy placement was different before the Rock Thrown. 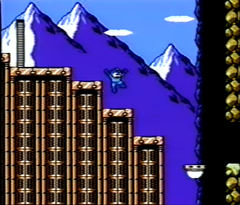 The Lyric enemies are absent in this area. The first Lyric after Eddie is also absent.

The Metall Mommy's babies walk instead of doing small jumps, one walking back and forth from its spawn point and two running away in opposite directions.

Different enemy placement in this area.

The terrain elevation in this area was slightly changed.

The background in the underground area was altered slightly, and two enemies were placed a bit further ahead. 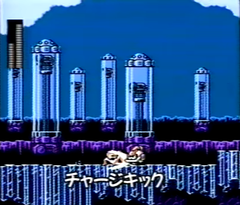 The first enemies to appear in Crystal Man's stage were Camons instead of a Pukapuckers.

The first area with falling crystals was different.

Falling crystals and pits were added to this area. It also had a few changes in the background and terrain.

The ladder's position is different, and the enemies are absent (assuming they weren't defeated before).

Charge Kick and New Rush Coil appear to be identical to the final release. 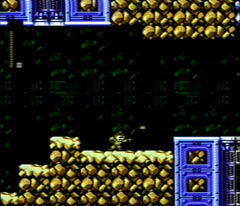 When using Star Crash, Mega Man fired a single star from his Mega Buster that rotated around him and moved in the direction of the closest enemy. It's unknown if it goes after enemies by pressing the fire button again, after some time, or when it detects a nearby enemy. In the final version, Mega Man creates three stars without using his buster, and the stars are thrown forward by pressing the fire button again. 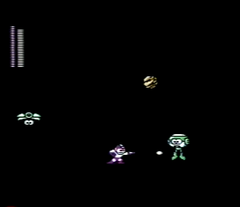 Gravity Hold acted similar to Mega Man 4's Flash Stopper. It darkens the screen and "holds" enemies in place, allowing Mega Man to shoot stopped enemies with his buster. In the final version it creates a flash that damages and temporarily stops enemies by increasing their gravity, launching them upwards and off the screen if defeated by the weapon. 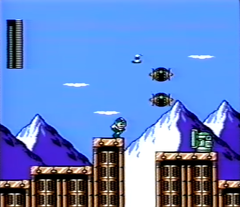 Gyro Attack could change directions multiple times, following the directional buttons pressed by the player. It also appeared to be able to move diagonally. In the final version it moves straight ahead and changes direction only once, either up or down.