Proto Man has gone crazy! Go shoot him up. 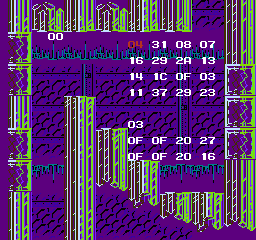 Use Game Genie code ATUKGUOZ for the Japanese and US versions or ATUKZUOZ for the European version to activate a spiffy little debug mode where you can do some neat stuff.

At NES address $E43B (ROM address 0x3E44B) is another debugging routine that is not called anywhere in the game's code. This particular routine would have allowed you to press Down on controller 2 to reverse Mega Man's gravity, or A to advance to the next stage. It also checks whether Right is pressed, though the associated functionality no longer exists (it performs a BEQ $00); it's possible that it was removed when the palette editor was added to prevent a conflict.

A little developer's note that's found below the title screen graphics in the Japanese version. The tiles being pointed to are the right edge of the "N" in ROCKMAN, and are duplicated in the sprite (OBJ) graphics. This part of the logo was converted into a sprite to work around palette limitations. Interestingly, the J here differs from the one in the game's standard font.

A traffic cone. Japanese sample cartridges of Rockman games (such as Rockman 4 and Rockman 7) often used these in place of unfinished Robot Master portraits, and this game was probably no exception.

An unused attack from Octoper OA. This tentacle was originally meant to rise up-and-down with Octoper OA, slightly narrowing the field of the battle and adding another obstacle to hurt the player.

The tentacle is still visible in Octoper OA's official artwork.

This cloud should have appeared on the first screen of Stone Man's stage, but doesn't.

The first half of Stone Man's stage has an unused version of the metal platform tiles seen in the second half of the level. They appear to be an earlier design of the tiles that were never updated. The final platforms are shinier, and the middle of the platform juts out a bit more in the older version.

Unused background tiles from Stone Man stage. An earlier version of them can be seen in some pre-release material.

These tiles are taken from the second half of Stone Man's stage. They're probably from an earlier design of the metal platforms.

This unused sprite was intended to be used for Gyro Man's throwing animation. It seems they accidentally used the same foot sprite for both frames of the animation.

One tile from this piece of scenery is never used. The "tip" of this in-game uses a repeated tile.

Whatever these tiles are supposed to be, they're not used.

Part of some kind of a window. These tiles are loaded during the interior segment of the train.

An unused missile is found alongside Napalm Man's graphics, right after the missile used in the final game. Its size and shape seems to match the shoulder missiles on Napalm Man's sprite.

Strangely, while Napalm Man's missile firing graphics show effects coming from his shoulders, the missile used in the final game more closely matches the head cannon. This animation oddity may be related to the unused missile.

Sprites for an unused running animation for Crystal Man.

An unused platform found in the graphics bank used by Proto Man Castle 4. There are two versions in the backgrounds data, each with a different palette. The gold version can be seen in pre-release material.

Unused background detailing for Wily Castle 2. It appears to be a bolt. Even though the tiles are nowhere to be found during gameplay, they are also in the game's 16x16 background blocks data, showing that they were meant to be part of the metallic slab:

Impressively, nine unused enemy designs are present in the ROM. Less impressively, about half of these are early designs for enemies that appear in the final game. Unfortunately, despite some of these graphics being loaded into memory alongside other enemies that are used, none of these enemies have any programming left over.

An earlier, slimmer version of the Bombier enemy.

A less detailed version of the Giree enemy, the only real difference being the size of the dot. Despite never being used, they are loaded alongside the Toss Machine enemy's graphics.

An early design for the Jet Bomb enemy, which greatly resembles the Walking Bomb enemy from Mega Man 3. Despite never being used, they are loaded alongside the New Shield Attacker and Asteroid graphics.

The Walking Bomb enemy from Mega Man 3 for comparison.

An early version of the Metall Cannon, boasting a smaller and overall less detailed design. Notable differences include a thinner foot, no shielding on the cannon, and no backrest to provide the poor little guy some much-needed lumbar support.

An early version of the Tondeall enemy.

A robot that would hang from the ceiling and try to stab Mega Man. While there's nothing concrete that places this enemy in any one stage, it's possible it was meant for Gyro Man and/or Stone Man's stages, due to the former's stage being referred to as the "Hanging Garden" and the latter's stage being in close proximity to said garden. A different enemy based on the bagworm concept, Minoan, appeared previously in Mega Man 4.

A small, head-like robot with a jet booster on the bottom. Presumably would've flown out of pits in order to knock Mega Man into them.

Mega Man 5 is the only title in the classic series without a Gabyoall-esque robot, but it looks like one was planned. Judging by the turned-over sprites, it can be reasonably assumed that Mega Man would've been able to knock them over, either with a fully-charged Super Mega Buster shot like the Pooker enemies from Mega Man 6 or with one of his special weapons.

A simple hammer robot. Despite never being used, it's loaded alongside the Metall Swim enemy's graphics. The concept of a hammer enemy would later be revisited with the Kao ga Mehda enemy in Mega Man 8.

The options, copyright text, and Proto Man's scarf have been moved down to accommodate the taller Mega Man V logo.

To fit the game's international title, four of the Beat plates were changed to spell "MEGA" instead of "ROCK". The one in Crystal Man's stage was also changed from a number 5 to a Roman numeral V. The "5" was left as-is in Mega Man Anniversary Collection, however.