Mega Man Anniversary Collection is a budget collection of the six main NES titles (whose ports are based on the PlayStation Rockman Complete Works series), 7, 8 (its debut on a Nintendo console), The Power Battle, and The Power Fighters. Most of the games, however, have some noticeable emulation problems, making it pretty obvious this was developed in a pinch. The Mega Man Legacy Collection series is by far the better option nowadays.

A Game Boy Advance version containing colorized versions of the five main Game Boy titles (and including an unknown bonus game) was promoted around the same time as the console versions, but ended up being delayed several times and was ultimately canned.

Quite a few changes were, intentionally or not, done for most games included in the collection. Details about said changes can be found on each game's respective pages: 1, 3, 5, 6, 7, 8.

The GameCube and PS2 versions were developed simultaneously, and thus several PS2 controller button graphics are present in the GameCube version. Since the NES games are straight ports of the Complete Works series (but with missing features), it's also possible that these icons came from the button configuration screens that were (for whatever reason) removed from Mega Man 1-6 and 8 when they were ported from the PS1 to the GameCube.

A set of Mega Man variants of the Japanese Rockman logos, whose logo style had been adapted internationally since 8, meant for the game selection screen. Variants exist for every game aside from 2, 7, and 8. They look rather crude and don't match the design of the actual modern logo, which is probably why they were cut. Mega Man Legacy Collection would later use the Japanese logo style for its game selection screen.

For some reason, there are multiple copies of the same .tga files present.

As mentioned above, Anniversary Collection is partially one large port of the Japan-only Rockman Complete Works, a PlayStation compilation of the six main NES games with slight enhancements. One such enhancement was the "Navi" mode, in which the player was given text hints throughout the game. This feature was ported over into Anniversary Collection, along with much of the original text. In addition, some debugging text is also present on the disc. In addition to this, many of the Rockman Complete Works sound effects are present within this game's files.

As the text dump is quite large, see the Notes page for further details.

Some of the .TIM files stores in the MegaGames folder holds unused graphics and leftovers from the Rockman Complete Works games. However, there are extra files present containing English text.

Here, an unused title screen with the title "Mega Man Complete Works" is present within the file. This could mean several things, such as Anniversary Collection originally being a direct collection of the PS1 titles. 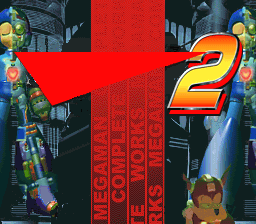 An unused title screen inside the Mega Man 2 folder.

According to text.txt in /MM1/, there may have been plans for an international release. Under the "Text Styles" section is a portion of text discussing "Language Codes":

No version of the game was released outside America, but the mention of the French, Spanish, German, Italian, and Japanese languages could very well mean the game was intended to be released worldwide.

Many audio files from the PlayStation 1 variants of Rockman 1 through 6 are present in a folder named COMMON. While some of them are used in the Navi mode pause menus, some of them do not appear because the start menu was removed entirely from all six games. Below are two audio files that are present in the game's files that remain unused. Because of the leftover files showcasing English-translated title screens of the Complete Works games inside of Anniversary Collection, it could be presumed that this project originally started out to be a localization of the Rockman Complete Works games.