A PSP-only title, Mega Man: Powered Up is a re-imagining of the original Mega Man game for the NES, using 3D graphics but retaining its 2D side-scrolling gameplay. While the game had a ton of features, it sold rather poorly, leading other planned remakes for later entries to be scrapped.

Toad Man actually makes a very small appearance in this title, though surprisingly enough he's impossible to see without hacking the game and getting the downloadable content. A sprite of the character can be seen embedded in the textures for Roll's Rainy Day outfit, which is itself modeled after a frog. However, due to the size of the image on the screen and the fact that it's obscured by the rest of the character model, the sprite is impossible to see in normal gameplay.

These sprites are amongst the menu graphics for item placement, suggesting you were originally able to have a bit more leeway with where you put the player and boss enemies before the current system was put in place. The "R" stands for "Dr. Right", Dr. Light's Japanese name, and no "L" equivalent exists.

In addition, there are two sets of animated sprites for when you hover the cursor over the player and boss starting positions in construction mode. This is impossible to do in the final game, and as a result no "L" version of the player icon was made when the game was localized.

If you fight the Wily Machine on hard or normal difficulty settings, Dr. Wily quickly repairs it into its second form after you destroy it. During this time, he tells the player to wait while he does the repairs, and apparently you were originally able to still shoot him instead of being unable to move.

Judging by the audio file's order, this was intended to play before he repairs his machine.

Originally, Roll would greet the player when going to construction mode. In the final game, she immediately starts the tutorial so this goes scrapped.

Beneath this mode, is a browser with more controls! In the final game, the browser is stripped-down. Although, websites looks broken. To access it, change the URL in PSP_GAME\SYSDIR\EBOOT.BIN 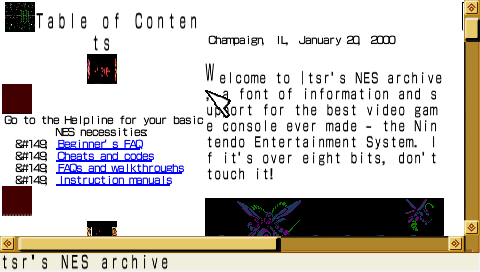 Pressing Start shows this menu. In the final game, it is only used to exit online mode. 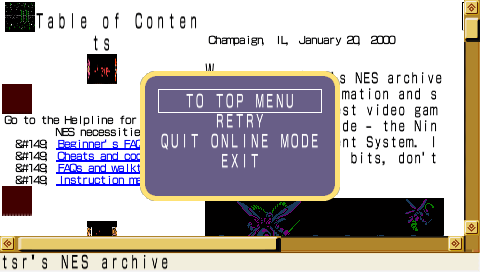 The cursor color turns to orange when hovering on a hyperlink. 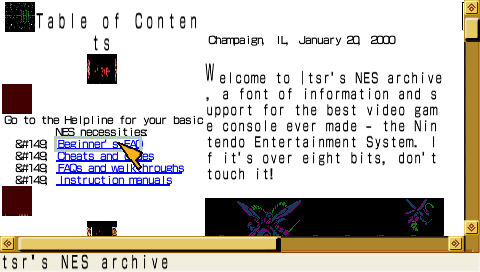 Pressing Square refreshes the page, and pressing L or R will scroll the page up and down respectively.

An unused page exists in the server with the url: http://phantom.capcom.co.jp/psp/ROCKPSP/ROCKMAN-TOP2.php 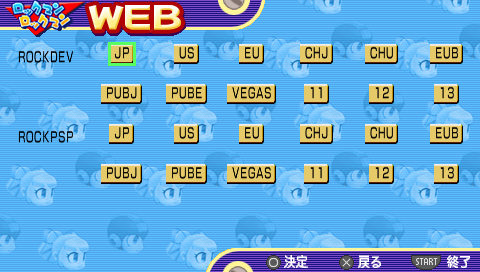 Oil Man's palette was altered completely for the international releases of the game, changing his skin to blue and lips to yellow. This was for damage control, since the character's original appearance fit the stereotypical representation of black people in Japanese media (i.e., Mr. Popo in the Dragon Ball series).

In the Japanese version, there's a gimmick at the title screen where the second "Rockman" in "Rockman Rockman" logo in the title screen would change to the name of the Robot Master you played last. For example, if you picked Blues (Proto Man) in the latest playthrough before quitting the game, the title screen will display "Rockman Blues" instead, in addition to his voice clip and changing the picture of Mega Man to him. In the international versions, it was hard to emulate this change with the localized title Mega Man Powered Up, so this logo gimmick was cut and only the picture changes. The Japanese voices are not present in the international versions and vice versa.

Of the 41 Special Stages released between 2006 and 2007, 20 of them were made to promote some product or other. Of those, only four of them were released worldwide and all four featured advertisements for other Capcom PSP titles. And, because some games have different titles or logos from one region or another, the advertisement graphics differ depending on the region the levels were downloaded from. 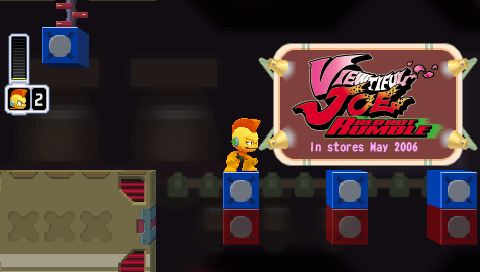 The European download of this stage has a small modification to this ad. The stage was uploaded worldwide on March 24th, 2006 but Europe wouldn't receive the game until May 26th, 2006.

It should be noted that the graphics are embedded somewhere in the level files, themselves. Loading the Japanese version of WITH_JOE on a European game will still show the Japanese advertisement, for example. This also means that the other 16 levels with custom graphics (3 for USA, 12 for Japan, 1 for Europe) look exactly the same in all versions of the game, since their graphics are embedded into the level files, too.

While the Chinese version has translated text, it retains the logo and voices from the Japanese version.