Mega Man X4 marks X's first entry on the PlayStation and Saturn as the Maverick Hunter has to team up with his buddy Zero and fight off an entire Reploid army that decides to go rogue because everyone is bad at basic communication.

The game has many similarities to its sibling Mega Man 8, and marks the cut-off point where many fans think the series jumped the shark.

Plus the infamous "WHAT AM I FIGHTING FOR!" 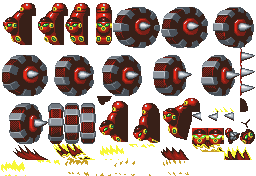 Present in the data for the second section of Storm Owl's stage are graphics for Rollin' Gear, an enemy that wouldn't debut until X5.

Unused frames of Double. While the only unused part about the three on the right is his facial expression, the first sprite to the left is entirely unused.

Used in a demo version of the game. A placeholder graphic for boss portraits, particularly for unavailable stages.

Used in a demo version of the game. A placeholder graphic for boss portraits, specifically for selectable stages that have unimplemented bosses.

Used on the title screen in the demo version of the game.

Used in the demo version after getting a game over. The "FOR PLAYING" part of the message appears to have been overwritten.

Unused throughout all known versions of the game, and untouched in the international versions. Palette data for these images still exists, however.

Located on the PlayStation NTSC disc is a file called PLDEMO.ARC containing data for an unused demo. This file is not present on the Japanese release. The demo starts X at the final boss, which for spoiler reasons is probably why it was cut (that and the atrocious playing).

This footage was captured by copying the data from PLDEMO.ARC over one of the four demo files that are used.

The images of X and Zero from the player select screen slide across the title screen's opening animation. This was simplified in the international builds.

Additionally, the menu selection on the title screen was also repositioned in the International versions.

The Japanese ending song, Yukie Nakama's "One More Chance", was replaced with a different track for the international releases.

As with the previous X games, the Mavericks go under new names overseas, though in this case one (Split Mushroom) is spared.

The Japanese pause menu gives instructions on how to perform Zero's techniques. In order to fit their romanized names, international releases omit this.

Some voices, such as the pre-battle voices from the eight selectable bosses, were disabled in the international releases. While these bosses do still retain their voices during battle, Cyber Peacock is the only one who's been muted entirely.

Many enemies behave differently in the demos, causing all but the Military Train demo to desync.

Has a few differences from the original PS1 release: