From The Cutting Room Floor
< Prerelease:Sonic the Hedgehog 3
Jump to navigation Jump to search

This is a sub-page of Prerelease:Sonic the Hedgehog 3.

For many years, Sonic the Hedgehog 3 had almost no concept art released, outside of some pieces in MTV's Rock the Rock special. This would change in June 2022 with the release of Sonic Origins, which includes never-before-seen concept art from Sonic 3's development.

The Evolution of Knuckles 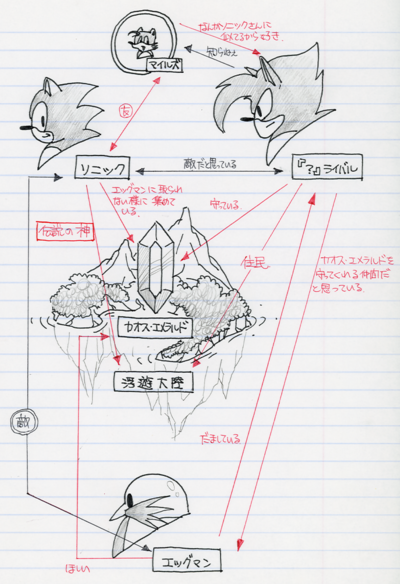 A chart showing the main central characters and their relationships. On the top-right is the earliest known version of Knuckles, originally a hedgehog without a name (his name box simply says "? Rival"). Also included is early concept art of Angel Island (known as "the Floating Island", later used as its name in the US and European manuals for the game) and the Master Emerald (known simply as the "Chaos Emerald" at this point). 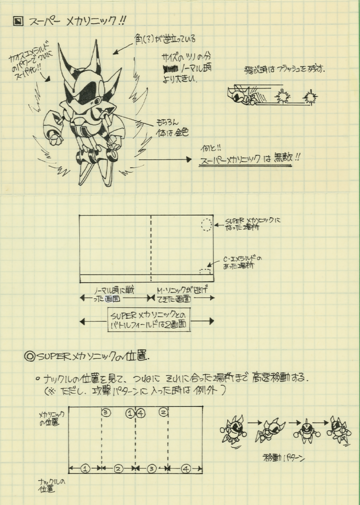 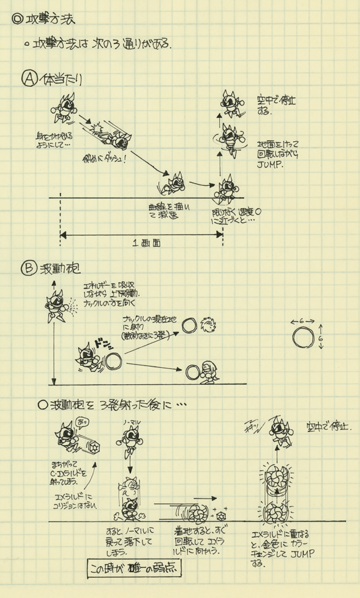 Two pieces of art showcasing an early design for Super Mecha Sonic, with a design that more closely matches the original Mecha Sonic design seen in Sonic 2. Knuckles' depiction here matches the small sketches shown on the character design sheet for "Stealth" above and seems to be drawn on the same type of paper, suggesting they likely originate from the same point in development.

The sketches only show plans for the encounter with Super Mecha Sonic specifically, which is the second phase of Knuckles' battle against Mecha Sonic in the finshed game. It seems as though instead of absorbing the energy of the Master Emerald, Mecha Sonic takes the Emerald itself to use as his energy source, and has to retrieve it whenever he loses it to regain the ability to transform into his Super form.

Very early pieces exhibiting basic progression layout ideas for all the levels. Proper Zone names had not been conceived at this early stage, so each Zone merely has a basic description - these have been matched with the final Zone names in the text below for added clarity as to which Zone each sketch relates to. This document uses Knuckles' earliest known design from when he was still an unnamed hedgehog (referred to as simply "Rival") and features all 2D levels.

It seems a lot of elements seen in the final game were already planned at this point, such as having two bosses per Zone and Knuckles' playthrough featuring unique pathways through many stages and taking place at a different point in time to Sonic's. Some of the bosses have basic sketches showing a rough idea of the form they were intended to take; others don't seem to have been fully conceptualised yet, and just show a generic Eggman riding in his Egg Mobile as a placeholder for the encounter.

Pieces that were made to help give a level its look and feel. While there are some new pieces, a lot of it is actually modified pieces of Sonic 2 concept art; any such cases will be noted below. Most of the images are screengrabs from a brief glimpse of a wall full of concept art in the MTV special Rock the Rock, and as such the quality of the images varies greatly. Based on the number of artworks shown, each stage received one colored concept art. 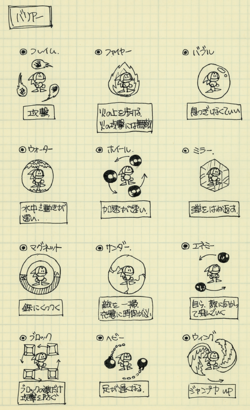 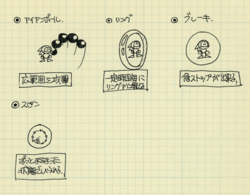 Sheets showcasing 16 potential shields for the game, which would be cut down to just three in the final game.