This page details prerelease information and/or media for Sonic the Hedgehog 3.

Unlike its direct predecessor, Sega opted not to release any significant preview material of Sonic 3 as it was being developed, likely due to the frantic nature of its production and the many predicaments unfolding behind closed doors. This questioned people whether builds were given out to magazines, though the November 3rd prototype confirms at least one build was sent out.

Rather, Sega instead sent out VHS tapes that the magazines would write up about; although presumably many were made, only one from late in development has been released.

Sonic 3 was originally developed under the working title "Sonic 3D", and was planned to be a drastically different game compared to its predecessors. Unlike the side-scrolling Sonic 1 and Sonic 2, Sonic 3D was to be an isometric game using pre-rendered 3D graphics, while the Special Stages featured a polygonal Sonic in a figure eight-shaped stage. This was to be accomplished using Sega/Samsung's SSP1601 chip, the Sega Virtua Processor (SVP).

Development on this initial version of the game lasted until June 1993, when the developers were informed that the SVP wouldn't be available in time, which would result in a long delay. Even then, a delay was not possible because Sega had signed a promotional deal with McDonald's that mandated that Sonic 3 be out in February 1994. Due to this, the developers scrapped all their work and decided to build Sonic 3 off Sonic 2. In the end, the SVP would only be used for Virtua Racing, which it was initially developed for.

Not all the work on Sonic 3D went to waste: the character renders were re-used for the title screens of Sonic 3 and Sonic & Knuckles, plus the "No Way!" screen; the in-game sprites of Sonic, Tails, and Knuckles were also designed to resemble these renders. The isometric concept also ended up getting used in Sonic 3D Blast in 1996.

Due to the success of the previous two games, Yuji Naka was given more creative freedom and wanted Sonic to go through a large game, essentially doing what they wanted to do with Sonic 2. Early on, the developers had already planned all the stages for the final game, spanning 14 zones, however Sega had a cross-promotion with McDonald's that required the game out by February 1994. Many of the stage concept art was reused from Sonic 2's development, with Metropolis Zone's hilariously being changed to "interior of a blimp" (most likely referencing Flying Battery).

Due to the short development time left, the developers decided to essentially split the game in two; the first seven zones would be polished and released as Sonic 3, so that the final seven zones could be worked on and released as a second part. Flying Battery Zone was planned to be the fifth Zone, following Carnival Night and preceding IceCap, however it was later moved to Sonic & Knuckles due to time constraints. During this, Sonic Spinball was created so that a new Sonic game could be released in time for Christmas 1993.

Arguably one of the most famous mysteries surrounding the development of Sonic 3 regards Michael Jackson's involvement with the composition of its soundtrack. Masato Nakamura, who composed the first two Sonic games, was highly successful and popular in Japan, and his asking price for Sonic 3 was significantly higher as a result. As such, Sega chose not to hire him to compose Sonic 3‍ '​s soundtrack and instead look elsewhere. It was then that Michael Jackson, who was at the height of his fame and was a Sonic fan, approached Sega and was hired to write tracks for Sonic 3, with allegedly the entire game's soundtrack having been composed by Jackson.

However, Jackson left before the game was completed and is not credited in the final game. The extent of his contributions - or whether his contributions remain in the game at all - remains a source of debate. Over the years, developers who worked on the game have provided conflicting reasons for his departure. Sega Technical Institute head Roger Hector, who first revealed Jackson's involvement in 2005, has stated that Sega fired Jackson following the first accusations of child sexual abuse against him, which arose during the game's production. This stance was backed up by Naoto Ohshima in 2018. Additionally, Sega staff, including then-Sega of America president Tom Kalinske, have said that no contracts or agreements were signed.

In contrast, Brad Buxer (one of Sonic 3's composers) stated that Jackson left because he was unsatisfied with how his music sounded on the Genesis. Doug Grigsby, Cirocco Jones, and Buxer have also stated that Jackson's contributions remained, and that he chose to go uncredited. This was corroborated by an anonymous source who spoke to GameTrailers in 2013, who stated that Jackson himself had chosen to go uncredited; the developer identified the music for Carnival Night Zone was one of the pieces that Jackson had contributed. Carnival Night's theme contains identical notes to Jackson's Jam, and contains a sample that was later confirmed to have originated from Jam. Buxer also claimed that the credits theme for the game is what later became the basis for Jackson's song, Stranger in Moscow.

Although still a topic of debate, the 10 tracks most commonly believed to be composed by Michael Jackson and/or an associate are the Act 1 boss theme, Knuckles's theme, the Competition Menu theme, the credits theme, and the tracks for both acts of Carnival Night Zone, IceCap Zone and Launch Base Zone; IceCap Zone, especially, was discovered in the early 2010s to have originated from an unreleased track for Brad Buxer's band, The Jetzons, titled Hard Times. It's worth noting that the tracks for the Act 1 boss theme and Knuckles's theme used different compositions in Sonic & Knuckles, which extended to Sonic 3 & Knuckles. The 1997 PC version of Sonic 3 titled Sonic & Knuckles Collection ended up using different songs in place of all of these themes (with the Act 1 boss music using the Sonic & Knuckles version). It was originally believed that either licensing issues or limitations of the MIDI format (which couldn't reproduce the samples used in those tracks) forced Sega to hastily compose new tracks; however, Hidden Palace's release of a prototype debunked those theories, instead revealing that the aforementioned "replacement" tracks were the originally intended compositions the entire time. Since that prototype is dated around October/November, this means that Jackson's music was likely implemented at the last minute.

The intro went through three variations after the November 3rd prototype; In the first picture, Sonic's sprites have been finalized, but Knuckles still wears green socks, clashing with the HUD palette (due to both using the same palette), which has also finalized. The camera is less centered than later builds. It's also a little hard to make out, but it appears that Sonic's Super palettes remain unaltered from 1103.

The second pic has Sonic and Knuckles' final palettes, lack of HUD and is more centered on Sonic, but swapped the purple and blue Chaos Emeralds so they could be better seen in front of the waterfall. The left boundary for this stage is also nearly final but is at X position $1300 in this build.

The third picture is exactly the same as the second except that the left boundary for the stage is now in it's final position at X position $1308. 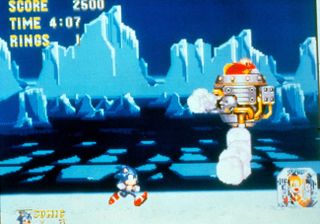 At this point in development, Act 2's background has the darker palette implemented (but not the transition to the brighter palette after the miniboss), and the HUD is still shaded like the 1103 prototype.

At about 0:25 of this 1994 commercial for the Innoventions held at Walt Disney World is some footage of a late prototype build of Sonic 3 likely dated a couple weeks before the final build. It shows a bit of the 2P stages like Azure Lake and Desert Palace, a Special Stage, and a tiny amount of Launch Base Zone Act 1.

VHS footage of a very late prototype of Sonic 3, possibly dated only a few days before the final build.

For some bizarre reason, certain sprites of Sonic, Tails and Knuckles in the Game.com version of Sonic Jam are based on sprites from earlier builds of Sonic 3. This went unnoticed until 2020, after the release of the November 3, 1993 prototype. One set of sprites that differ from the final's (Tails' hanging sprites) are the same as they were in Sonic 3C 0408, and the early whistling sprite.

The second of Knuckles' three skidding frames is drawn like his November 3rd design, which is quite odd given that the other two sprites match the final version.

Knuckles' pushing animation is more static, which matches up with Sonic and Tails'. While frames two and four are the same, one and three were redrawn to add more motion. Looks similar to Knuckles' walking animation in Sonic Blast.

Sonic's arms in his "hurt" frame are more straight, and his right foot is slightly more to the right. This lines up with the competition sprites, indicating that this is sourced from an early build of the game.