From The Cutting Room Floor
Jump to navigation Jump to search
This page contains changes which are not marked for translation.
Other languages:
English • ‎polski • ‎русский

This page details one or more prototype versions of Sonic the Hedgehog 3.

The November 3rd, 1993 prototype of Sonic the Hedgehog 3 was released on November 16, 2019 as the finale of Hidden Palace's Sonic Month. It is the first and currently the only true prototype of Sonic 3 to have been discovered, as all previous prerelease ROM images match the final. Although the EPROM labels claim a date of 3 November 1993, the ROM header suggests the data may be from late October, which would make sense given that this build is wildly incomplete for a game that was supposed to be finished by the end of November. It was made at a time when Sonic 3 was starting to be split into two separate games.

The prototype seems to be the same one that was showcased in the Sega Magazine issue from December 1993, given that all of the screenshots are 1:1 matches of what's seen in this prototype.

It appears the Angel Island Act 1 demo is intended for an older build of the game: the demo desyncs after the player fails to hit a Caterkiller Jr., forcing Sonic to run into a Rhinobot and die before the demo's expected ending. When edited to add objects back into the spots, the demo continues all the way to the miniboss, showing off many level gimmicks along the way.

The existence of the demo itself is odd: there were no media showings of Sonic 3 prior to this build, which means the demo was likely designed for a private showing. 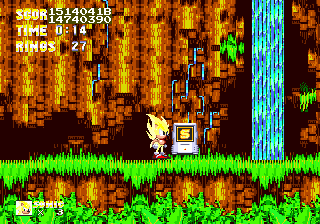 Coding for Super Sonic exists even though the Special Stages haven't been implemented yet, thereby preventing you from gaining any Chaos Emeralds. He can only be accessed by destroying an S monitor (which normally can only be placed in Hydrocity Zone). Most of the code is reused from Sonic 2, with a few adjustments: the invincibility music plays instead of using a unique track, and the palette cycling has been adjusted to only use three colors in Sonic's palette instead of the four colors that Sonic 2 required.

However, the actual colors used are still based on Sonic 2's palette format (where the darkest blue in Sonic's palette is indexed first, followed by progressively lighter shades of blue) instead of Sonic 3's format (where the lightest blue color is indexed first, followed by darker shades). As such, the palettes for both Super Sonic and Sonic's palette after the transformation runs out appear inverted (and in Hydrocity's case, the underwater palette from Chemical Plant is reused). 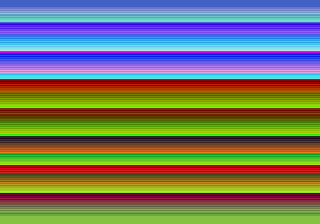 Hidden within the prototype is a color testing mode that rapidly cycles through different colors. It can be accessed with the patch code FFF600:003C and entering a zone or letting the demo play.

The Sega screen is still largely based on Sonic 2.

What makes this bizarre is that this change was done to the sample itself; NOT the sound driver (unlike Sonic the Hedgehog's sped up snare sample). The SEGA sample would then get changed again in the final, this time without the filter and slightly sped up.

Playing as Tails or Knuckles

You can play as different characters by pressing the following button combinations at the title screen:

Tails and Knuckles have graphical problems with their end-of-level signposts, however; 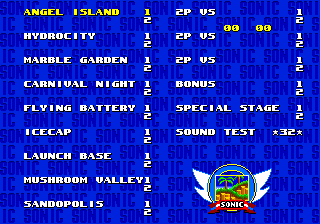 Almost the same as the final game, though it plays no music, rendering the File Select theme unused. One other difference is pressing B while the Sound Test selection is highlighted will play the error buzzer sound.

The below Pro Action Replay codes can be used to regain access to these Zones, though not much of them remain in this build:

Options and 2P VS. 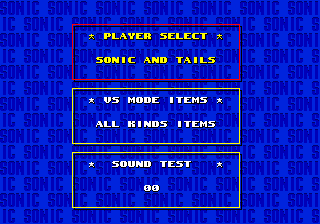 By setting the game's screen mode to $24, you can access the Sonic 2 options menu. Alternatively, you can use the patch code FFF600:2400 or hack the menu back in yourself. Much like the Level Select, no music is played here.

Pressing Start will begin the game at Angel Island with the selected character. The Sound Test can also be used to enter the Sonic 2 cheat codes: 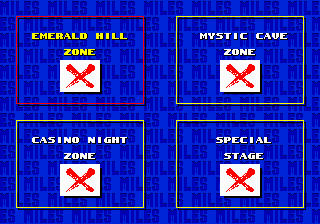 It's also possible to find the 2 Player Level Select from Sonic 2 using the patch code FFF600:1C00. However, selecting any of the zones on this screen will send you back to the title screen, so you can't really do anything with this menu. Leftover graphics for the Sonic 2 Results Menu also exist, but all the coding has been removed.

Leftover graphics from the Results Menu can be found.

The unused Sonic 2 vertical hanging animation for Sonic. A similar animation would be used in Sonic & Knuckles for the intro of Mushroom Hill Zone Act 2.

A smaller version of the Turbo Spikers. This is found in an unreferenced Kosinski Moduled-compressed archive at 0x132802.

Retrieved from "https://tcrf.net/index.php?title=Proto:Sonic_the_Hedgehog_3&oldid=1348952"
Categories:
Cleanup > To do
Games > Games by content > Prototypes
Games > Games by series > Sonic the Hedgehog series