Sonic Pocket Adventure is basically Sonic Unadvanced. This also marks the second time Sonic appeared on a third-party console prior to Sega leaving the first-party console business in 2001. 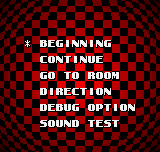 Change byte 0x1F of the ROM to 0xFF in a hex editor to enable Developer Mode. (This is done automatically in some ancient emulators such as "Rather a Pokemon Emulator?" and NeoPocott, for some stupid reason.) When the Sega screen is displayed, press Option to jump to the main debug menu.

An interesting function of the debug mode is that it allows the player to switch between Sonic and Tails by pressing B. Pausing the game no longer causes the Pause banner to appear and it is possible to trigger a free-movement mode by pressing A + B'. 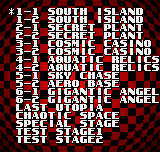 This is pretty straightforward. Simply pick the level with which you wish to start the game, as though it were any other level select screen.

The "Test" levels are just clones of Neo South Island, which will crash the emulator when selected.

The Zone names are largely accurate to the final game. Neo South Island is shortened to "South Island" for space reasons, Aquatic Relix is spelled "Aquatic Relics", and Aerobase is spaced as "Aero Base".

This will take the player to the puzzle and option screen.

This will take the player to the ending scenes. 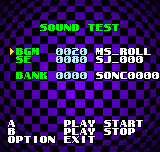 Opens up a simple sound test, clearly more developer-facing than the fancy animated sound test players can unlock on the Game Options screen. 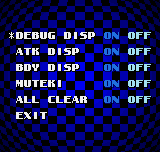 A bit more difficult to understand.

Sonic Pocket Adventure uses a single multi-region ROM but varies some details based on the console region.

Every Zone in the game features a number of hidden Photo Pieces which can be arranged into character artwork in the Puzzle Room. Oddly, the "Tails"/Miles naming seems to be inverted compared to what would generally be expected.

When first entering the "Time Attack" mode, once must beforehand enter a name which will then be saved whenever a new time record is reached in the game. On the Japanese console, you can use katakana and hiragana in addition to alphabetic characters. On the International system, it's only the latter (obviously).