Sonic Jam is a compilation of the four Genesis Sonic titles (Sonic 1, Sonic 2, Sonic 3, and Sonic & Knuckles) plus bonus content in the form of Sonic World (the precursor to Sonic Adventure) and a number of different gameplay options.

Rather than being emulated, the code from the original games has been ported to the Saturn. Because of this, more substantial changes can be observed compared to other Sonic compilations. Notably, these versions of the games use CD audio.

The Sonic World engine has a number of unused objects, most of which are null. However, two of them still somewhat function and have models.

Object ID 0x2B is a monkey that walks in place. You can walk through it and he does nothing else. Probably meant to be in a tree. 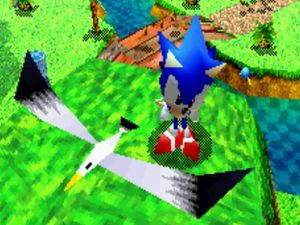 Object ID 0x2C is a seagull that just sits in place. Probably meant to be in the sky. You can walk through it too.

Sonic World is actually based on an early prototype of Sonic Adventure! Sonic Team didn't want to waste the work they did when the game was moved from the Saturn to the Dreamcast, so they just put what they'd finished in Sonic Jam as a bonus for players. So it's no surprise that Sonic Jam's code contains unused animations reflecting the same animations used for Sonic in Sonic Adventure.

Sonic's spring animation, but going diagonally instead of straight up. Matches up with the animation used in the Special Stages of the Saturn version of 3D Blast.

Sonic rolling over, which leads into one of his falling animations. Most likely transitioning out of the previous animation.

An animation of what seems to be Sonic pushing something?

Sonic pushing something to the side, maybe opening a door?

Sonic picking something up from the ground.

What seems to be Sonic pointing at something up ahead.

A longer version of Sonic picking something from the ground, along with him examining it.

Either a honking sound or a door creaking. 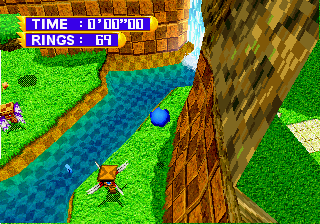 Behind the waterfall of Sonic World is a piece of sidewalk that can be seen by fiddling with the camera. By jumping at the waterfall's invisible collision at a certain angle, you can clip out of bounds and walk on it, but why is it there...?

These can be found by inserting the disc into a computer's CD-ROM drive and looking in the /Extra directory.