The 8-bit ports of Sonic the Hedgehog scaled down the Genesis game and included the all-new Bridge, Jungle, and Sky Base (not to be confused with Sky Chase) Zones. Given the limitations, it isn't too bad.

Although they're mostly the same content-wise, the Game Gear version has some unused sprites the Master System version doesn't, and vice-versa. The Game Gear's smaller screen also meant that things had to be scaled down, resulting in the Green Hill boss being laughably easy.

The Master System version also holds the distinction of being the last game released for the console in North America. 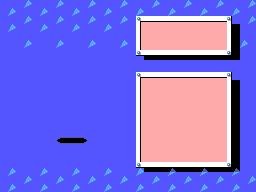 An early version of the credits screen can be found in the Master System version at ROM offset 16AEE. The triangles in the background were replaced with yellow and blue stars in the final version.

An unused rendition of Marble Zone's theme is present in the Master System version's ROM at offset CD0A. This and the unused Batbrain graphics (present only in the Game Gear version) suggest that Marble was intended to be included in the 8-bit ports but was cut due to time or space issues.

This sound echoes twice. Might have been used for an early death sound effect. This would later be reused in the Game Gear version of Sonic Spinball and its port to the Sega Master System when grabbing a Chaos Emerald.

This is a heavy bubbling sound. May have had a use in Marble Zone before it was scrapped?

This sound is similar to the bumper sound, but at a higher pitch. Probably based off the Mega Drive version, as it is the same pitch.

Sounds like an alarm. May have had a use in Scrap Brain and/or Sky Base?

A copyright string starts at 0x3B:

A text string (with minor variations) used as filler in the ROM banks.

The 8-bit versions of Sonic 1 are mostly identical, but besides the resolution there are some differences in the Game Gear version: