Now more commonly advertised under its Japanese name of Sonic the Fighters, Sonic Championship sees the fuzzy blue mascot taking on Fighting Vipers, with mixed results. Due to Sega of America's fear of the game being seen as violent (despite its violence being 100% slapstick), the game saw an extremely limited release outside Japan.

A Saturn port was planned but never materialized, and the game remained an obscurity until Sonic Gems Collection. The game was rereleased on Xbox Live Arcade and PlayStation Network in November 2012, which included a couple of characters who weren't playable in the arcade release.

To activate debug mode, a series of inputs are required. Hold down "Service SW" (Service Coin) and using P1 controls press RIGHT, RIGHT, PUNCH, LEFT, RIGHT, PUNCH, KICK, RIGHT, RIGHT, UP, PUNCH. There will be no confirmation the code has been entered correctly, but this enables debug functions. To enable the debug menu itself after this code is entered, hold P2's BARRIER button and press P2 START. The menu can be navigated by holding P2 START and P1's directional controls. To access a debug menu's submenu, press P1 START over the option you wish to select.

To enable a display that gives debug information such as a "CTRL_TIMER", "GAME_TIMER" and current program modes, use the debug mode enabling cheat and set DIP-SW 1 on.

To disable foreground textures, such as the HUD with health bar and timer information, as well as the "INSERT COIN" graphics, use the debug mode enabling cheat and set DIP-SW 7 on. This will override the debug display DIP-SW setting.

A number of themes exist in the game and can even be played in the sound test present in both the test menu and in the Options menu in Sonic Gems Collection, but never end up used during actual gameplay. It should be noted that the PSN/Xbox Live Arcade releases of the game allowed you to replace the main menu theme with any track from the game, and as such these tracks are unused in any variant predating them.

A second arrangement of the character select screen, which never ends up used in the actual game because the first version is used. The port in Sonic Gems Collection uses this as the Option theme.

A mysterious track which is given the title of "Sunset Town" on the game's OST, a stage which doesn't even exist in the final product. Remixed versions of this song later found use in Sonic Boom: Fire & Ice.

Present in the test menu's sound test, this track proves very interesting in that it isn't featured on the OST CD, and it is unknown how it would've been used if properly implemented.

This track, christened "Hurry Up" by the OST, also attributes it to the Death Egg Hangar level... which does exist unlike Sunset Town (it's the final boss location), but the battle against Eggman uses a completely different track ("North Wind", or more precisely the Sonic VS. Knuckles theme). The track is still listed in a used list of songs used in order for single-player mode. The song was to come after the final boss, but since there is no stage after the final boss, this renders the music unused. This could mean the value for the "North Wind" track was simply inserted by accident which caused the song to go unused.

Bizarrely, this track would finally end up used in the Death Egg DLC level of Sonic & Sega All-Stars Racing, where it's played in the pre-race cinematic. 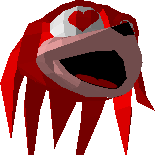 All of the characters have heartstruck expressions, complete with hearts in their eyes and blushing. Only Bean's expression is used as a random object Amy can drop and even that is rare to see.

There are several emotions and speech bubbles that are not used in the final.

Confusion or anguish. Likely would have been animated.

A speech bubble with "Yes!" written on it.

Another speech bubble with "Yes!", this time entirely in blue.

This particular bubble with "No!" written on it is just never seen.

The last of the unused speech bubbles.

Remnants of a planned pinball stage, which was replaced with Casino Night.

Might have been some sort of power-up. Interestingly, the left hand's victory sign is one of the first objects programmed in the game.

An X, Y, Z coordinate object. This was probably used heavily during development.

These three balls were likely test objects, since they lack any real detail and are in a primitive state. This is supported by the fact that these are the first three objects programmed into the game.

A rocket is in the game for some reason.

This might have held the Flickies and Pockies seen below, similar to Panic Puppet Zone in Sonic 3D Blast (released just a few months after this game).

Likely had some correlation with the Chaos Emeralds, as there is one Flicky for each Emerald and they are colored the same.

Likely would have the same purpose as the aforementioned Flickies.

An alternate rabbit model, which only has a blue-colored version. The design differs from Pocky's appearance in other Sonic the Hedgehog games.

An outline of a heart.

This little guy is the star of his own arcade game. He was likely supposed to make a cameo in Aurora Field.

A mode where opponents were supposedly replaced by other ones. It seems to be unfinished however, as all the opponents (except for Metal Sonic and Eggman) are instead replaced with Knuckles. Other oddities while playing this mode areː

There are some characters who are inaccessible without using MAME cheats. Some of these were finished up and made available in the HD rerelease.

A yellow cat-like character with black hair, based on Candy from Fighting Vipers (Candy's name in Japan was Honey). She was discovered after the release of Sonic Gems Collection. In an interview with Hiroshi Kataoka, he confirmed that since Sonic the Fighters was initially designed around Fighting Vipers by simply placing Sonic characters in it, the character was modeled around her.

Honey's in-game data is nearly complete, with a complete moveset, but she is incomplete:

Notably, unlike other characters, when both players select Honey there is an actual alternate costume for her instead of a grayscale version. Honey's design was used in a short clip intro for the Sega Saturn version of Fighting Vipers.

While Honey's model was removed completely from the Sonic Gems Collection port, the XBLA and PSN versions added her as a secret playable character (move the cursor over Amy and press Start, which also unlocks an achievement/trophy) with the above issues corrected, including a proper versus screen image. 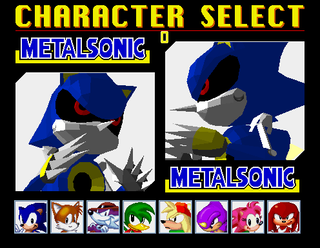 Hasn't got a greyscale version for mirror matches, like the Final Boss version of Eggman. He was made playable in the HD rerelease by pressing Start over Sonic on the character select screen (offline versus and online versus only). 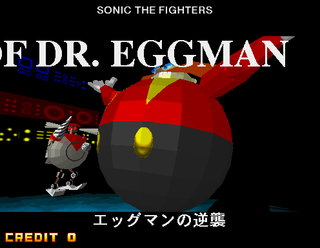 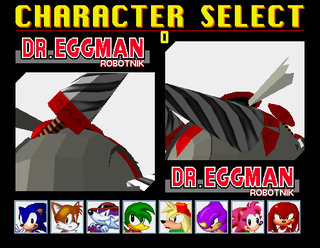 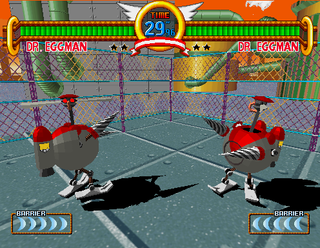 Eggman's robot from the intro cutscene. Doesn't have a grayscale version for mirror matches. Head keeps rotating around like in the opening cinematic. It has no between-level artwork (it uses Eggman's). He has Final Boss Eggman's move set, except the triple punch uses purple speed lines instead of white.

While RoboEgg does have a player name buried next to all the other names, in-game it just defaults to Eggman's. 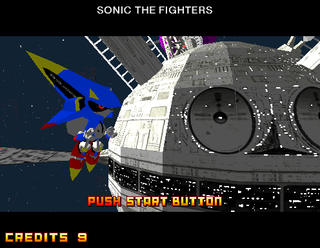 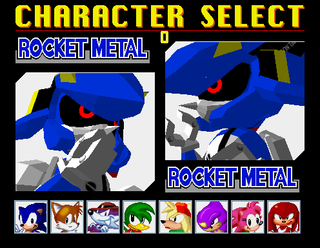 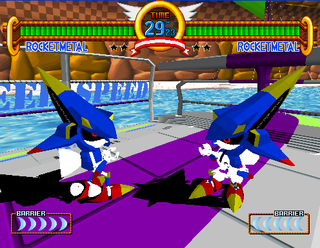 Mecha Sonic Model No.29, seen briefly in the intro. Strangely, he actually has his own name graphic instead of defaulting to Eggman's. He also seems to share the same eye issue as Honey. 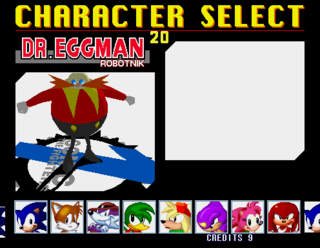 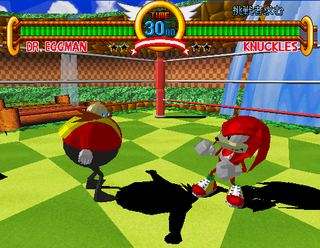 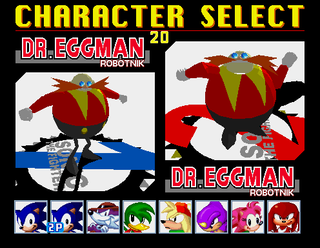 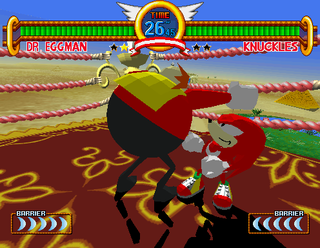 A larger version of Eggman, à la the Fighting Vipers end boss. His model is broken when standing idle, but looks fine when moving or performing a move. 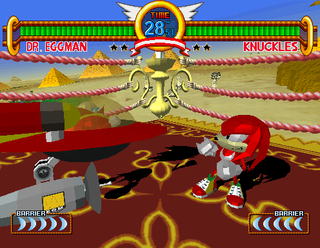 The little UFO Eggman uses to create greyscale clones for Mirror Matches. Has the default character moveset, since it clearly wasn't supposed to be fought. 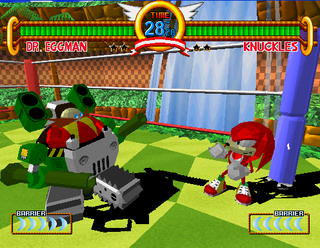 There's one last unused Eggman form, but there's no model data except for some tank treads. However, someone made a recreation of it, as seen in the image above.

There are some regional text differences, mostly in cutscenes.