Sonic 3D Blast is Sonic, but in isometric 3-D! Analog control not included.

Released as a stopgap during a rather tumultuous time in Sega's history, 3D Blast is a combination of the Sonic formula and Flicky's gameplay. The game would later be ported to the Saturn and Microsoft Windows, where it originally received mixed reviews due to the two game concepts clashing with each other.

In December 2017, Jon Burton (the game's lead programmer) created a "Director's Cut" patch to improve on many of the flaws present in 3D Blast, leading to a critical re-evaluation of the game. 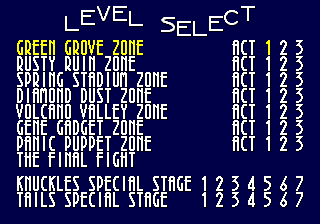 Press B, A, Right, A, C, Up, Down, A (BARACUDA, seemingly a misspelling of "barracuda") at the title screen. You'll hear a twinkly sound and be taken to the main menu. Set your desired options, choose "START", and you'll be presented with the Level Select.

(This is probably much better for the long-term health of your console and cart than the next method.) 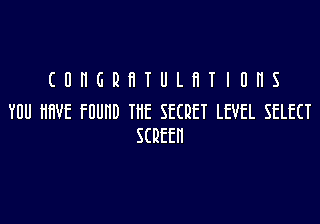 A somewhat unique exception handler where, unlike (for example) the Sonic 1 crash-and-print-text-on-the-screen, the game congratulates you and loads up the Level Select. Obviously, this method of crashing is much more appealing to the player than a complete lockup, and may have prevented a number of angry tech support calls. This was done to pass quality assurance from Sega and to prevent the game from printing an exception handler, as any exceptions the game threw up would simply redirect the player to this screen.

There are numerous methods for activating this screen: loading a bad savestate from an emulator, using a bad Game Genie or Pro Action Replay code, pulling the cart out and putting it back in, having dirty contacts on the cart/console, hitting an obscure program bug, etc.

Jon Burton, the game's lead programmer (who has made a number of videos detailing 3D Blast and other Traveller's Tales games), has a video that explains in more detail why the Level Select is used as a crash handler.

The invincibility theme only plays for about 18 seconds in-game, but there's a bit more to it that can only be heard in the Sound Test. This can also be heard if the player pauses at the same frame the music begins. 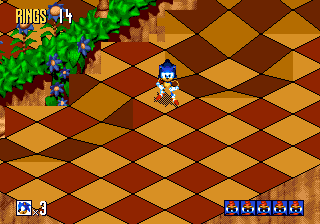 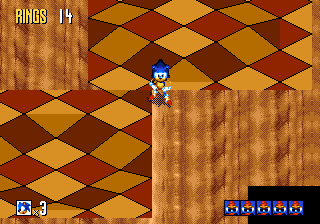 After passing the first loop of Act 1, there is a large empty area blocked off by a wall. In the E3 prototype, this area is properly accessible; apparently, only the collision was removed. Lower down, there is another area that does not appear in the E3 prototype. 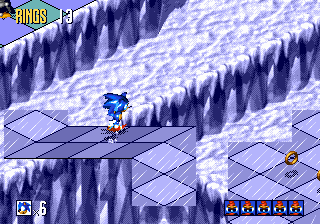 An alternate route exists blocked off towards the beginning of the Act, just after the first spring. 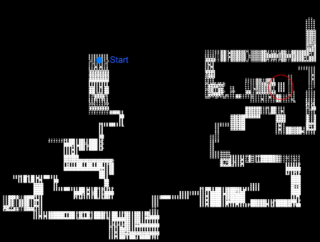 There's a blank collision area set at a very low level near the coiled tube.