5 parts Werehog, 1 part Sonic, what do you get? Sonic Unwiished!

These graphics can be found in one_wii/title in the directories labeled TGS, and exist in both Japanese and English. 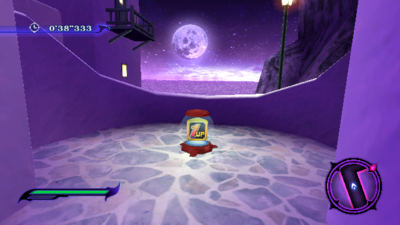 In Apotos' 2nd nighttime tutorial, an unused 1-up item box is loaded outside of the mission barriers, where a regular secret item box normally exists. The graphic is taken from Sonic the Hedgehog (2006) instead of the image of Sonic's head used in the final game.

Its presence in a level hints that the game used to feature a more traditional lives system (in the final game, a maximum of 14 extra lives are permanently obtained only in Gaia Temples, and are automatically replenished after completing a stage). However, collecting it no longer has any effect.