The 2013 version of Sonic the Hedgehog 2 is the third game in the Taxman/Stealth collection of remastered Sonic games. Like the 2013 Sonic 1 before it, the Sonic 2 remake replaces the rudimentary emulated version originally on the App Store and adds Knuckles, auto-match multiplayer, and widescreen support as well as running on the fan-made Retro Engine.

The remake is most notable for including a completed version of the famed Hidden Palace Zone, accessible in normal gameplay...although it uses the 2-player Mystic Cave tune (like the Simon Wai prototype of the Genesis original) rather than the otherwise-unused Song #10 that plays upon loading the Zone in the final because they felt it was a better fit.

This, along with the iOS remakes of Sonic 1, Sonic CD, and a brand new version of Sonic 3 & Knuckles, is part of the compilation Sonic Origins. 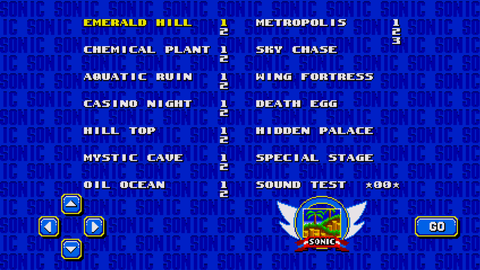 The level select can be accessed the same way as in the 2013 Sonic 1 - start a "No Save" game and choose a character. On the SEGA logo screen, tap the letters S-E-G-A in that order once the entire word appears. If done correctly, you will hear a ring chime. Then hold two fingers on the bottom of the screen and wait. After the title screen appears, you'll be taken to the level select. Oddly, Hidden Palace is accessible, but only after beating it in a save game or exiting Proto Palace Zone (see below). Otherwise, trying to select it just makes a buzzing noise. Debug Mode does not change anything either, unlike a similar issue in Sonic & Knuckles.

Additionally, Tails' name can be changed to Miles by tapping the letters A-G-E-S at the SEGA logo screen. Or if using a controller, by pressing Up, Down, Down, Down, Down, Up at the title screen. 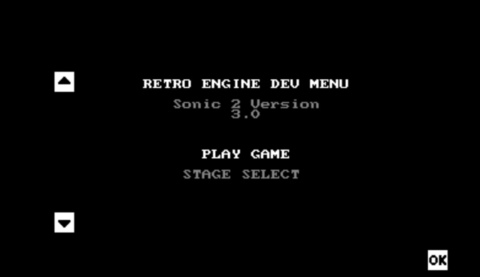 Hidden inside the game is a normally-unused Developer Menu. It allows you to choose any stage from the game, including the hidden Egg Gauntlet Zone. A similar menu exists in the Retro Engine remakes of Sonic CD, first Sonic 1 and Mania. 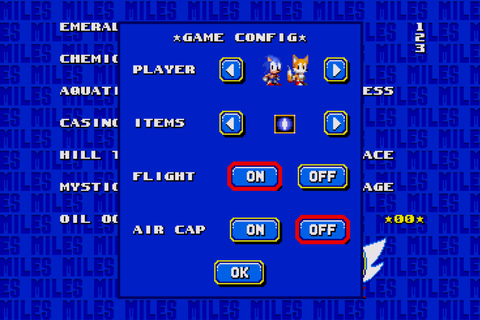 Play sound 00 three times in the Sound Test to bring up a "Game Config" menu. It replaces the more rudimentary menu from the 2013 Sonic 1. 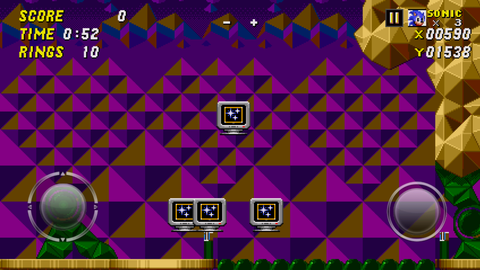 Tapping the lives counter in Debug Mode will take you back to the Level Select.

Selecting 2P VS after playing a No Save game with Debug Mode will allow you to enter a two-player game without connecting with another player online. While on the Stage Select screen, press Y on a physical controller, or L or 3 on a keyboard and a random character will join the game. The second player will always hang out at the starting point of a level, though, and will never move.

This stage, added in Version 3.0.9, is the version of Hidden Palace from the Genesis original's Nick Arcade, Simon Wai, and August 21st prototypes. The level uses the otherwise-unused Track #10, as it does in the original game.

As with the stage's original incarnation, it's incomplete and stops at a certain point, although the water slide is now fully functional, among other minor changes. Rather than the "Master Emerald" acting as a breakable object, it instead warps the player back to the level select.

Dying in Proto Palace Zone will result in the game loading the used Hidden Palace Zone. Completing the stage by placing a signpost or capsule will send the player to Oil Ocean Zone, as was the case with the garbled version of Hidden Palace in the original game.

While a ring chime still plays upon entering the aforementioned code in the Sonic Origins port, Proto Palace Zone itself is inaccessible. This code and debug mode are now needed to merely access Hidden Palace Zone through the level select, which wasn't the case in the original mobile version.

A scrapped boss attack level featuring some original artwork such as mechanical palm trees, as well as graphics from (of all places) Sonic Crackers. Sega did not approve of the level as they did not wish for the bosses and enemies to be seen outside of their usual environments, and the level was scrapped.

The Zone was left fully playable, albeit inaccessible by normal means. It features all bosses in the game except for Brass Eggman, and has no checkpoints (although there are rings between bosses). Unlike Boss Attack Zone, Egg Gauntlet features short platforming segments taken from the main Zones, as opposed to ones in Boss Attack that bear little to no resemblance to the Zones they are based on.

From v3.0.9, the stage itself and its bytecode (object code) were removed, effectively making the level unplayable. "Egg Gauntlet Zone" is still referenced in StringList.txt. However, file names and some leftover code suggest that this level had an entirely different name in development: all of the sprite files have the abbreviation "MBZ", and unused functions in the "MBZSetup" script reference the files "MarathonBase.ogg" and "MarathonBase_F.ogg". These .ogg files don't exist in the RSDK. Interestingly, the 2013 Sonic 1 also has code that references an unused Zone called "MBZ". The exact development timeline between these two games is unknown.

Sonic's animation files list "Super Peel Out" as an animation, though it is unlikely that this move was planned since it is just random parts. What is interesting about these parts, however, is that they match up exactly with the Super Peel Out frame locations on the Sonic CD (2011) sprite sheet, suggesting that it was used as a base. Tails' Super Peel Out animation is actually his top speed animation, and Knuckles' animation has no frames.

Most of these are, unsurprisingly, leftovers from the original Genesis game.