The 2011 Sonic CD is not just a modern-day recode of just your average Sonic the Hedgehog game on a CD...and that's not what you're told (probably).

This is the first-ever published Sonic the Hedgehog title running on Christian Whitehead's Retro Engine, faithfully porting pretty much everything the original Sonic CD had to offer in a widescreen 16:9 aspect ratio, plus some extras and improvements such as an unlockable Tails to play as.

This, along with the iOS remakes of Sonic 1, Sonic 2, and a brand new version of Sonic 3 & Knuckles are set to be part of the upcoming compilation Sonic Origins.

This appears to have been a cut feature from the Mobile versions, most likely being a manual toggle between the use of touch controls or an external gamepad.

While "Final Fever" is the title of the Japanese final boss theme, Christan Whitehead stated that during development this Final Fever was to be the name of a new boss stage. However, the level was cut due to Sega wishing to remain faithful to the original game.

This text can be seen in-game if the stageID is incremented on a completed save file.

A sprite of Sonic, most notably used during the Sega CD BIOS boot. As it is present next to Sonic's sprite for the character select screen, it is safe to assume this once occupied that slot before the newer sprite took its place.

Interestingly, while most of the Sonic sprites that went unused in the original game aren't present in the files, new Tails sprites based on originally unused Sonic sprites made their way into Sprites/Players/Tails3.gif. The 3rd frame has no transparency whatsoever.

The image that occupied the Exit selection of the Time Attack screen in the Sega CD and 1996 PC versions, but with the "Exit" text replaced to slightly bare more resemblance to the main title screen. Oddly, this can be seen in the Xbox 360 version by pressing B to exit Time Attack, then pressing A to select any Special Zone just before the transition to the main menu. The level the player goes to is the hidden eighth Special Stage, with the giant Eggman head in the background.

There is also a value that does the same as the default flag. The only difference is that it doesn't use rotated sprites and instead lets the engine rotate them to multiples of 45 degrees.

The final game uses PNGs in .arc files, but .gif sprite sheet versions of the pictures the manual uses exist for some reason. These are, however, used in the mobile versions as they don't use .arc files.

Located in the .arc files. 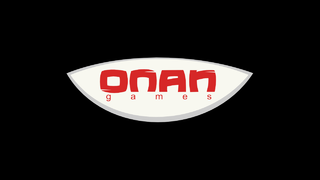 Confusingly, there doesn't appear to be any official connection between Onan Games outside of this image in the .arc files. 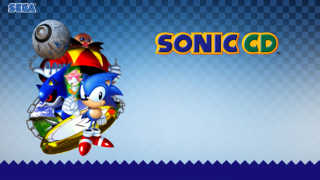 A simple wallpaper that was used as a loading screen on older versions, but later was removed and has been unused since then. However, if you use the "Download Latest Compatible Version of the App" feature in iOS 6-7, you will get an older version of the game that has this wallpaper when you open the game. For Android, you need to find an older APK (Android package file) of the game. 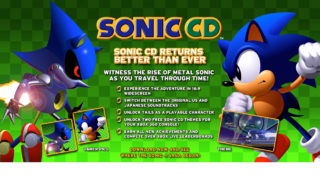 A leftover for when you completed the Xbox 360 demo. There are multiple versions for multiple languages. 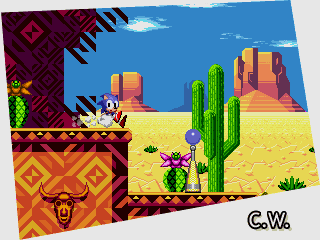 According to Christian Whitehead, Desert Dazzle was a new level he was working on that ended up being cut for time and authenticity reasons. The level's graphical design was heavily influenced by the well-known desert mockup image that was sent to magazines to promote Sonic the Hedgehog 2 in the early 1990s. The image on the left can be accessed by entering the Sound Test code PCM: 32, DA: 8. After viewing the image, you'll be taken to the Stage Select with Tails as your character.

In the January 2014 update, stage assets for both Desert Dazzle and Final Fever were discovered, complete with full-level maps. The video on the right is a mod of the PC version, which replaces Palmtree Panic's tiles and level layout with Desert Dazzle's. Because the stage was never finalized, no Badniks or gimmicks were ever implemented. The default background music for both soundtracks is the Time Attack theme (track 33).

Desert Dazzle would finally see the light of day in Sonic Mania, with its tiles reused/revised for Mirage Saloon Zone.

As with future releases of the Retro Engine, There is a secret developer menu allowing you to skip to other stages and scenes throughout the entire game. Set byte 0xCCB (offset CAB in HxD) in the GameConfig.bin file to 1 to access this menu from the pause screen.

In all western releases, the non-highlighted palette of the menu text is a grayish hue. The Japanese version has a white hue for this text, as well as the expected translated text.

There are multiple differences between the various versions of the game: