Classic Sonic and Modern Sonic finally meet! Many paradoxes ensue! The PC version is notable for being released after a drought of new Sonic games for the PC, greatly rewarding Sonic fans' patience with a largely unscathed port of Sonic Generations in 2011. Sega still does what Nintendon't.

There are evidences that once a huge debug mode was present in the game.

At the beginning of the file, there is a variable named "g_IsDebugSequence". If this value is 1, the Lua script will boot directly into the debug initialization (MODULE_DEBUGINIT) instead of the start of logo sequences (MODULE_NOTICE_CESA). However, the game will get stuck at a black screen, because the game requires displaying the Havok logo to successfully initialize the game. In addition, this flag is reset to 0 when the game enters the title screen.

If the debug initialization (MODULE_DEBUGINIT) is entered from the title screen without setting g_IsDebugSequence to 1, the game will enter the main game, but with no visible changes.

If the debug initialization is entered AND the variable g_IsDebugSequence is 1, the lua script will try to enter the debug menu screen mode (MODULE_DEBUGMENU) instead of the hub world (MODULE_PLAYABLEMENU). However, the game will get stuck at the last frame of "Sonic is falling" intro animation.

Images from the Sonic Unleashed debugger remain in the game.

All these debug images were in a folder named "reddog". An early screenshot of Sonic Unleashed showed the debugger in action.

disk/bb3/#Application.ar.00 holds these files. Some of them, such as ApplicationSettingDebug.lua and DebugLauncher.lua, seem to be unused.

Within an unpacked bb3.cpk is an Application.ar.00 which contains these files:

There's a lot of "dummy" files in there. The dummy-<color> is just a pixel of that respective color.

The game has a XML file which stores the name of each level object in Japanese, which are never seen in normal gameplay. The XML file organizes the objects by category, so it was possibly used by Sega/Sonic Team's level editor.

The dump of XML file is available in the Notes page.

The game's executable is scattered with the filename of the game's source code. For some reason, some of the filenames such as "hhMessage.h" is repeated many times in the exe. More info is on the Notes page.

In the Characters section of the art room, there are 14 characters with biographies, however, the data includes text for an entry for Super Sonic, who's never seen in this section and lacks any other data for it in the XML files.

In Planet Wisp, Sonic can collect Wisps from Sonic Colors: Classic Sonic can use the Pink Spikes, while Modern Sonic can use the Orange Rocket. Normally, they're only in this level, but there are skill entries/descriptions for them in the skills file. However, they cannot be hacked into a save file, as they are missing from the game's Skill list.

Except for "OrderDashRing" (used) and "BreakEnemy" (unused), every mission type is described by the Japanese developer's comment in the mission script.

This mission type has no objectives or limitations.

This mission type doesn't seem to have an effect; presumably replaced by the Endless Boost skill.

An unused part of Silver's rival boss theme that doesn't play in-game. In the original soundtrack, it just plays later on in the track at around 2:28 - but they separated this from it and labelled it Pt2. The original purpose of this track being separate is unknown.

This song plays when Modern Sonic gets an invincibility box...but there aren't any in any Modern acts. It still works if you hack Modern Sonic into a Classic stage, however. This did eventually get used in the 3DS version.

This song is supposed to play whenever the Time Break skill is used, but it doesn't. Despite it not being used, it has been included on the Blue Blur: Sonic Generations Original Soundtrack album release as "Skill: Time Break". It is a remix of Cyber Track from Sonic Advance 3.

An unused White World HUB theme, which sounds like the Green Hill Zone HUB theme but played with the instruments from White World's HUB theme.

The environment map for Planet Wisp is actually made of screenshots from the game itself. The six parts of the image, which are assembled together to form a cube, all show Sonic running through the air in a nondescript location in Planet Wisp. Just below his feet is a ball made of red wires, which indicates the use of a 3D rotation tool. The last two sides are duplicates of the first two.

Since Sonic Generations is basically just a modified Sonic Unleashed using the same engine there's bound to be leftovers in there. However, there are more leftovers than you might think! These images were extracted from the PC version.

The Foot Sweep Kick move from Sonic Unleashed is still in the game, but unused. It can be re-enabled by replacing 74 55 to 08 56 at offset 9FECD6, then pressing the B button in-game.

Inside bb2.cpk, there is a folder labeled Install that contains images that would've been used during an install process. These are also present in the PlayStation 3 version of Sonic Unleashed.

While there are new Shader Tables and a new optimized renderer, it looks like Sega forgot to take the old ones out. Oops.

See the notes page for info on how to set these leftovers to appear in the game.

One thing you can notice right off the bat is that the Unleashed renderer uses more intense motion blur. This is not so on the one that is used in-game. Additionally, the Unleashed version displays angular shadows (objects cast their shadows at an angle depending on the light source), which is not the case in Generations.

A leftover Boolean from Sonic Unleashed for whether or not the game is displayed in a widescreen aspect ratio. This can be set to letterboxed by hex editing A79DA5 to 00, although the HUD will improperly scale.

disk/bb/ActionCommon.ar.00 contains the Mission UI from Unleashed (ui_missionscreen.xncp), however, most of the textures are missing. Copying them directly from Unleashed makes it possible to view. 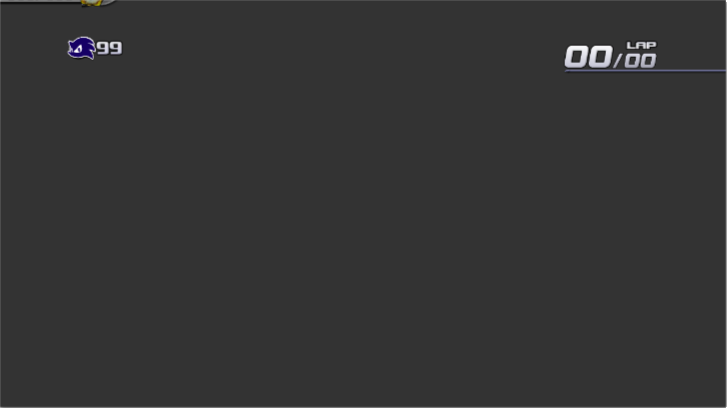 There are Friction/Acceleration/Velocity-related settings for ice surfaces, but since there are no ice-themed levels in Generations, these settings are unused.

Unfortunately, none of these debug options are functional in the retail version. Sonic still takes damage and dies regardless of these settings.

There are few unused animations in Scene called blb_gauge in XNCP file (disk/bb.cpk/SonicActionCommonHud.ar.00/ui_gameplay.xncp) for Time Eater

The PC version looks noticeably better and runs at a smoother frame-rate compared to the Xbox 360/PlayStation 3 versions. The Xbox 360 version also has horribly pixelated cutscenes, due to the files being downscaled to 480p and running at a much lower bitrate in order to fit on a standard DVD, unlike the PS3 version, which uses a 50GB Blu-Ray disc. The 360 cutscenes are also used in the PC version.

In the console versions of Sonic Generations, you could purchase an item in the Skill Shop called the Sega Genesis/Mega Drive Controller to unlock the ability to play the original Sonic the Hedgehog. The PC version removes this entirely, leaving a blank spot in the HUB. However, files for it (such as the White World HUB song and shop icons) are still in the game.

The game also uses Lua scripts in the missions and some of the bosses, but they are in plain text format for all versions.