The 8-bit Sonic the Hedgehog 2 has Tails practically everywhere except in the actual zones. It introduced the idea of fighting badniks as bosses and the requirement to unlock the final level.

This game also marks the first appearance of Tails in a video game, contrary to popular belief.

Originally, the level card for Gimmick Mountain Zone used its full name. Due to lack of space on the screen, however, "Mountain" was shortened to "Mt."

A peaceful, ethereal-sounding tune. What this song could have been used for is unknown, but it might have been an early theme for either Crystal Egg or Aqua Lake due to the similar style. The song also has some resemblance to the Present theme of Tidal Tempest in the Japanese/European soundtrack of Sonic CD. This song was removed from the Game Gear version, and was replaced by the sound effect that plays when Sonic (and Tails) look up at the stars at the end of the credits. Both of them use $92 as the song value.

These were removed from the Game Gear version. 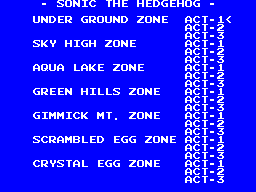 While powering on the game, hold Left + 1 + 2 on Controller 2. When the intro sequence starts, release the buttons, then start the game as usual.

When the intro starts, hold Down + Left + 1 + 2 + Start. When the title screen appears, wait for a ring sound to play twice (Tails will wink three times). Release all the buttons and press Start.

The 8-bit versions of Sonic 2 are mostly identical, but besides the resolution, there are some differences detailing the transition from Master System to Game Gear: