This page details one or more prototype versions of Sonic Jam (Sega Saturn).

A Japanese trial inside a European promotion disc. The Sonic Jam demo from the Sega Flash Vol.5 disc features a trial version of the Sonic World minigame and a few zones from Sonic 1 and 2.

The animated opening starts with the Sega and TrueMotion logos. In the final version, only the Sonic Team logo shows. The game is not localized yet, as almost all the text is in Japanese, including the disclaimer screens. 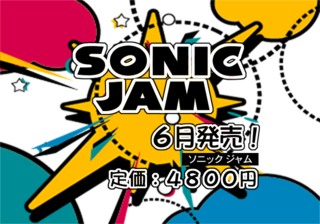 This screen is displayed when the demo ends. It translates to "SONIC JAM Release in June! Sonic Jam Price: 4800 yen".

It appears when any of the following happen:

Once this screen fades out, the game returns to the Sega Flash Vol.5 title screen.

Whether the player is in Sonic World or playing one of the classic games, they're completely unable to pause the game in this version. 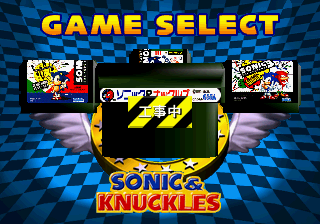 Only the game selection menu is present in this version - there are no further menus to select difficulty, read manuals etc. like in the final game. Only Sonic 1 and 2 can be chosen - the other two games, while present in the menu, cannot be selected and are marked with a message 工事中 that translates to "under construction". Selecting a game will IMMEDIATELY kick you into its first zone, meaning you can't use cheats or, if playing Sonic 2, play as Sonic or Tails alone.

The versions of Sonic 1 and 2 in this version are fairly limited:

After finishing either game's available stages, the game goes to the SONIC JAM Release screen. 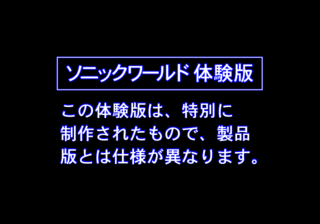 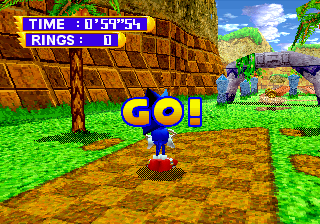 The player won't immediately be given control when they enter Sonic World. They must wait for a countdown timer to appear and reach "GO!" first. Despite this, they can still run around on the spot beforehand. Sonic World gives the player 1 minute to run around and explore the world. When their time is up, the game goes to the SONIC JAM Release screen.

This version of Sonic World is far smaller than the final game's, lacking many of its effects and features:

Despite Sonic not being able to enter buildings etc, the animations for him doing so are still in the game.

Aside from the world's limited state its layout is mostly the same as the final game's, but there are a few changes around the map. One of the few and easily noticeable changes is the presence of a spring that was changed into a platform for the final game, likely due to issues getting to the raised area with the spring's reduced movement while bouncing.

In the final game, the spring was moved onto a floating platform accessible via the raised area - only needed to gather rings floating above it. A nearby circle of rings in this area was reduced from 8 rings to 7.

Along the path near the character building, an extra pillar was added and the existing one was moved slightly to the left. A set of two rings on top of a nearby platform were removed.